Anna Schrock has an unusual backstory for a person who grew up Amish. Her family was a part of the New Order Amish movement in Lancaster County. The New Order Amish are primarily associated with Ohio, and particularly Holmes County (though today there are communities in quite a few other states).

As the Ohio New Orders emerged in the 1960s, there was another New Order movement happening around the same time in Lancaster County. However, that movement did not grow as the Ohio New Orders did, peaking at just a handful of churches in size – and eventually faded away. Here’s a brief description of the origin of the movements from our main article on the New Order Amish:

The New Order Amish originate from a pair of movements in Ohio and Pennsylvania in the 1960s. The key driving factors in the Ohio schism were twofold–one was a belief that controversial practices such as tobacco and alcohol use should be eliminated, and that “clean” courtship should be implemented for youth (as opposed to the practice of bundling found among some Amish).

Secondly, reformist Amish wished to introduce a more evangelical element into the church, concerning personal salvation and mission work. Amish in this group felt strongly about assurance of salvation, Sunday School, and church outreach. The division which occurred in 1966 in Lancaster County shared some similarities with the Ohio division, but was more focused on technology. New Order Amish are less commonly known as the “Amish Brotherhood”. 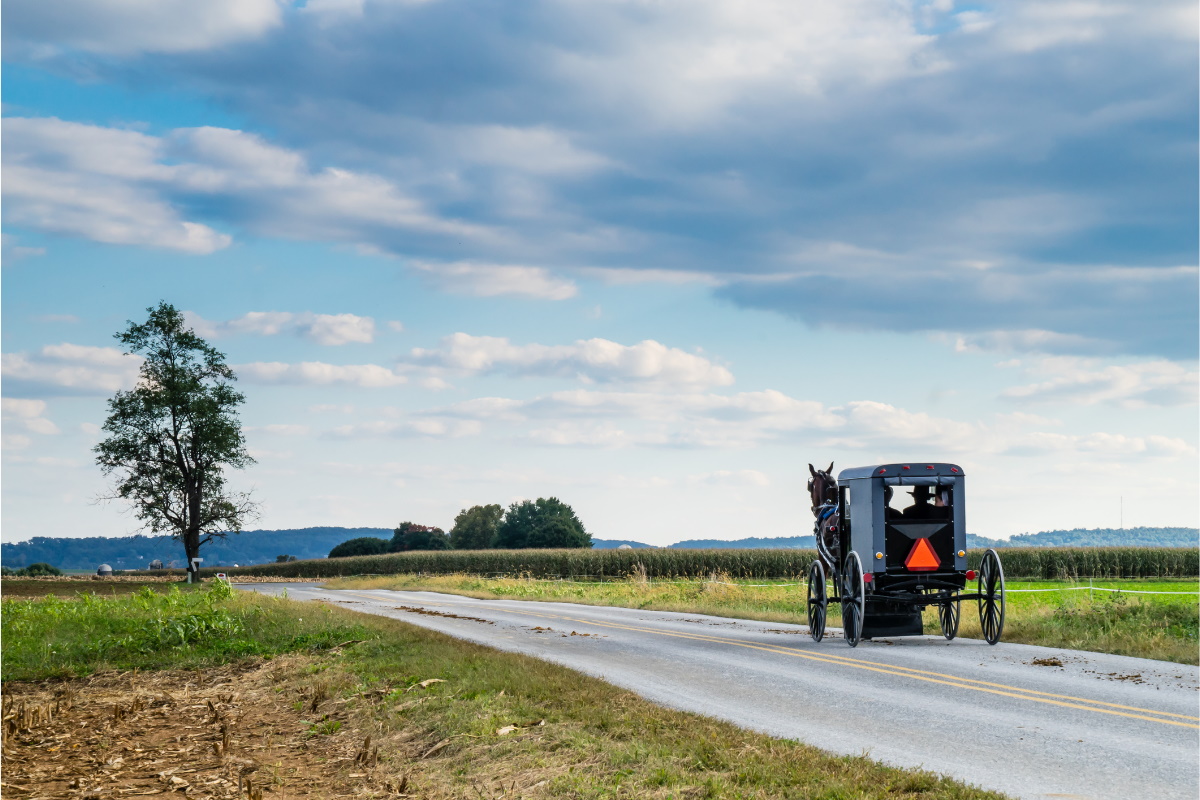 As Anna shares below, the Lancaster New Order community eventually disbanded. I had heard of this group at various points over the past 10-15 years that there were only some older members remaining. A source in-the-know reported in 2016 that “Some members joined other churches or moved to other communities, a few returned to the Old Order.”

Anna Schrock is no longer Amish today, but in today’s guest post, Anna shares with us about being a part of the Lancaster settlement’s small New Order community, now passed into history. She also gives her perspective on the Amish as someone who grew up in the community and today observes it from “outside”.

Life as a New Order Amish in Lancaster County

Lancaster County, Pennsylvania, is a beautiful area that is home to many Amish families. Most of them are the Old Order Amish. However, in the 1960s, a group of concerned parents decided to break off from the Old Order and start a new church. They called themselves the New Order Amish.

They had several concerns and reasons for breaking off. One of the main reasons being hunger for the Word of God. They wanted to study God’s Word together and learn the truth. In their searching, they came to understand that salvation comes by grace through faith. It does not come by works, as they were taught in the Old Order.

Another reason was, they wanted their youth to live moral lives. They did not want Rumspringa and believed that the use of alcohol and tobacco was wrong. 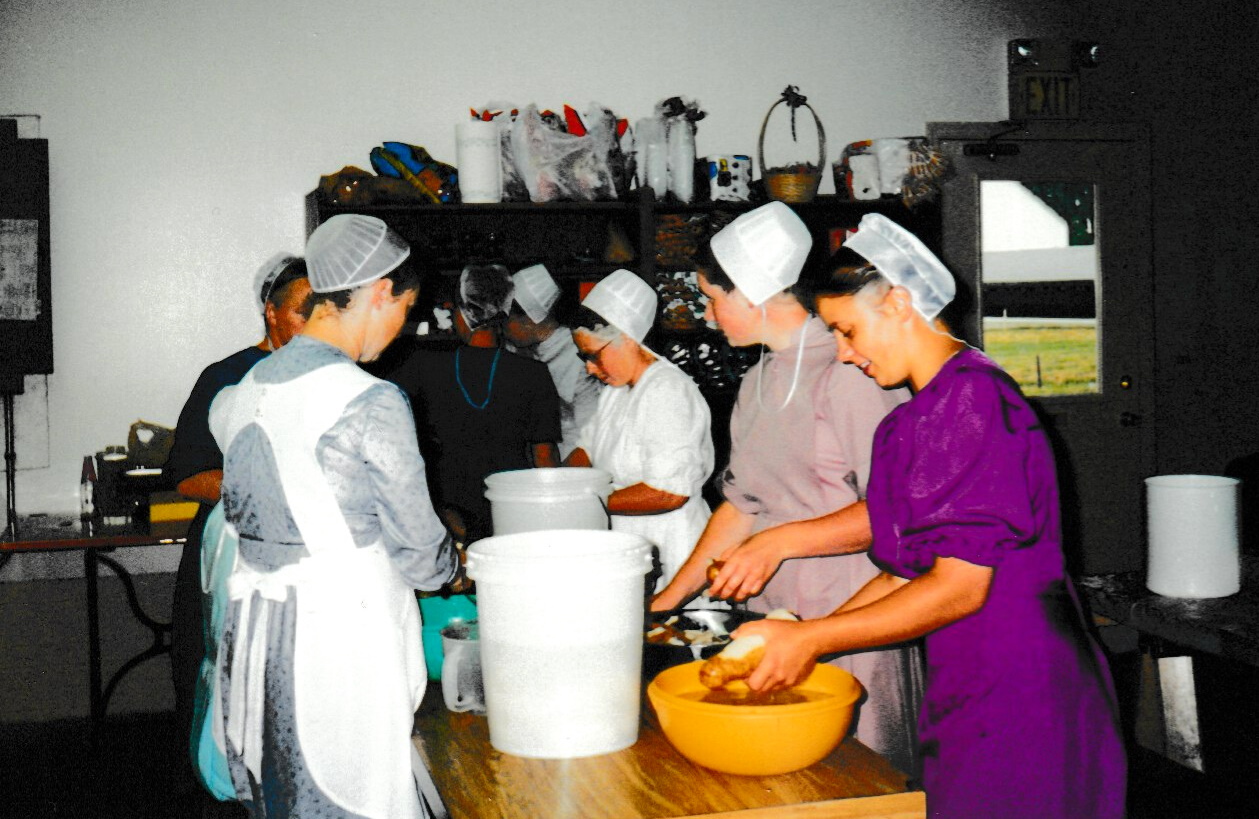 Ladies getting ready for Anna’s brother’s wedding. Anna is in the purple dress.

So the Lancaster County New Order Amish were allowed to have electricity and phones in their home. They farmed with tractors and had rubber tires/wheels instead of steel. And there were a few differences in their dress. We were allowed to wear lighter colors, etc.

Around the same time, some New Order churches started in Holmes County, Ohio. They also allowed more modern conveniences, but they do not have electricity.

Today, there are no more New Order churches in the Lancaster area

There were two New Order churches in the Lancaster area, and both of them had a good-sized membership. But, I think one problem with our churches was that we were too close to being like the Beachy Amish (the Beachy Amish are not considered as Amish. They are called Amish/Mennonites and would definitely not like to be classified as Amish.)

There was a pull for our church members to leave and join the Beachy Amish. The New Orders do not practice shunning, so we didn’t need to worry about being shunned when we left. Our beliefs were practically the same. We liked their dress style better than ours. And the biggest pull of all, the Beachy churches drive cars. 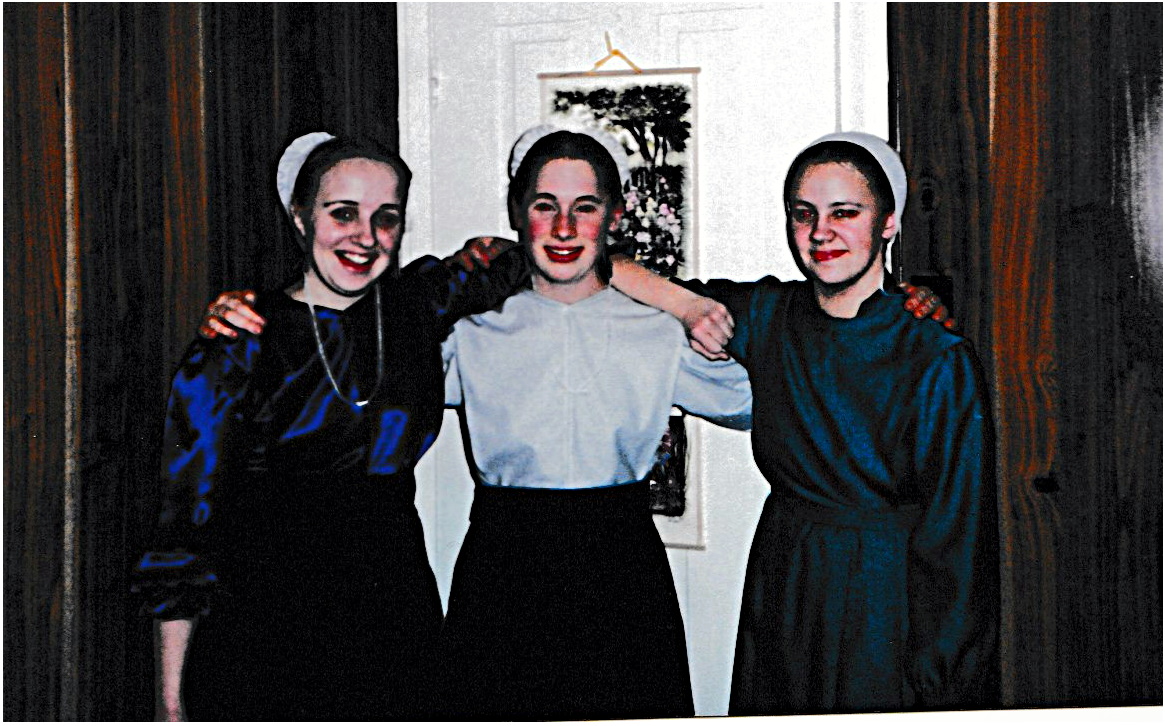 Ohio and Lancaster County girls switching clothing. Anna is on the right in the Ohio-style dress.

Over the years, our New Order members kept leaving and joining the Amish/Mennonites. It was hard on all of us that were left behind, and of course, it was especially hard on the older adults who had helped to start this church.

But finally, all that was left of the New Order in that area were older folks, and it was getting harder for them to host church in their homes, etc. So they all decided to join the rest of their families in the Beachy Amish church.

What was it like growing up New Order Amish?

We had church in our homes, every other Sunday, the same as the Old Orders. Then we had Sunday School on the in-between Sunday. So we got to host the service two Sundays before it passed on to the next family.

We divided into small groups for Bible Study every other Wednesday evening. And had two weeks of Bible School in the summer. So we had a lot more spiritual activity than the Old Orders do. 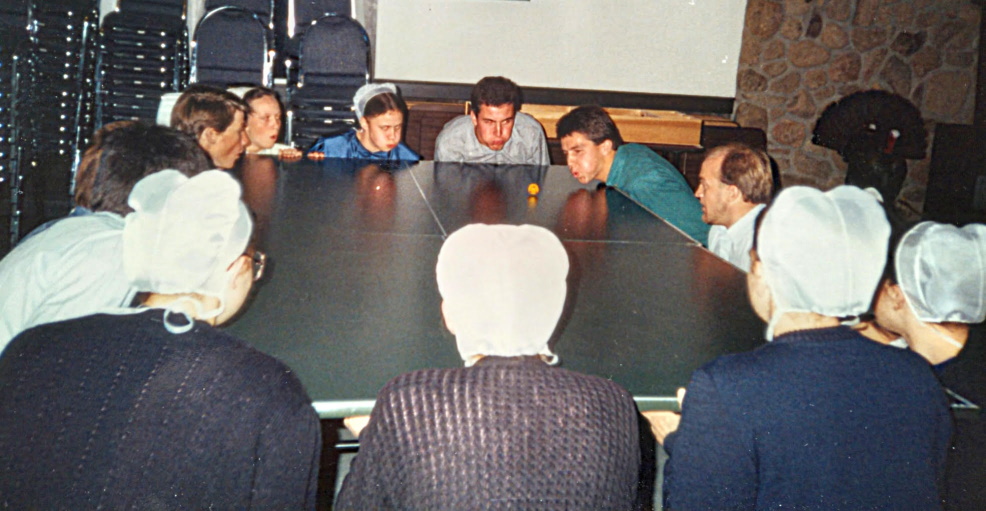 Our church taught the same doctrines as the Mennonites. We were taught salvation by grace through faith and strongly encouraged to read our Bibles, seeking to have a relationship with God.

The New Orders are more mission-minded

The New Orders are also mission-minded. Although we never tried to win people to our church, we did desire to see souls saved.

Once a year, a busload of youth, along with one of the preachers and a few other parents, went to New York City. We got in contact with Bowery Street Mission, and they invited us to come, to have a service for the homeless people who came in off the streets to their mission. We sang evangelistic Gospel songs and had a short sermon, along with an altar call for souls to be saved. Then we walked the streets to pass out Gospel tracts (I even got to see the city from the top of the twin towers). We always had a very good day in the city! And my dad became friends with one of the leaders at the mission, considering him a brother in Christ (this black brother also got to come to visit us at our farm.) 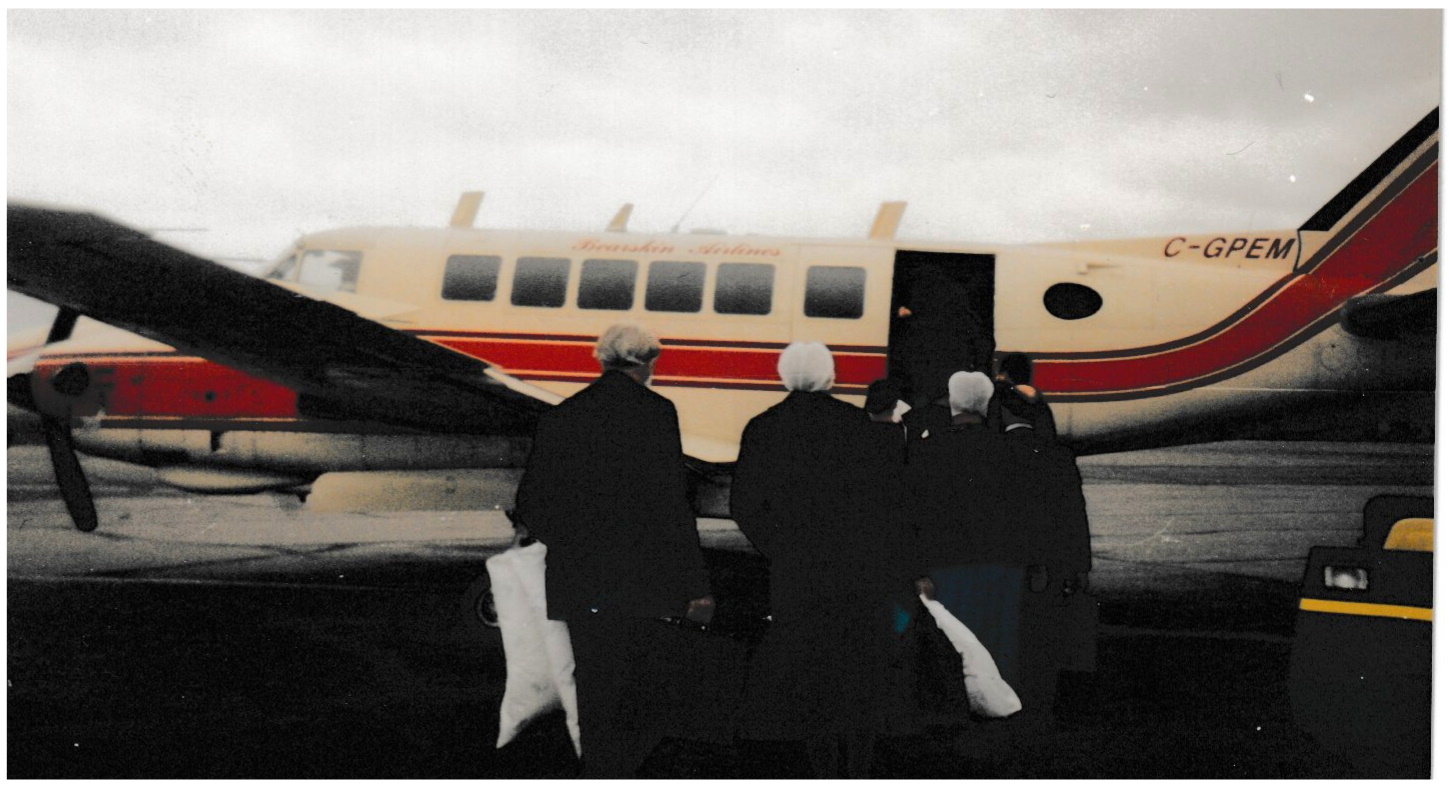 Amish couples getting ready to fly to a small Native American reserve in Ontario.

The New Order Amish also has a mission to a small Native American community in Ontario, Canada. They do not require the church members to dress like the Amish. But they do require the ladies to wear skirts and a simple head covering.

So we were a lot more like the conservative Mennonites. It was the horse and buggy and Amish-style dress that set us apart as Amish.

This may surprise you since we were all Amish… but sadly, I must admit that we New Order young people always looked down our noses at the Old Order Amish. We thought we were much better than them since we weren’t as plain, and we believed in salvation by grace.

Amish is a religion. And as you may already know, religious people are a big bunch of self-righteous, better than thou, judgmental people (Whew, that was a mouthful, but it’s the truth). We thought we had it all together, and we were the perfect people.

And my judgmental attitude toward others is one thing that has been the hardest for me to overcome. When you grow up in a religion that judges people by their outward appearance and everything they do, it can be difficult to change. But God is working on me, and my children remind me often to love people as they are and not be so quick to judge.