Thought this might be a nice out-of-season shot to share, on yet another snowy day in my neck of the woods (and maybe yours, too).

Rick offers us a pic from Mercer County, Pennsylvania, near the hamlet of Jackson Center, an hour north of Pittsburgh.   There are at present 3 Amish settlements in Mercer County, the oldest and largest settled in 1942, and having 5 church districts.  Later settlements came about in 1990 and 2006 and have 2 and 1 district apiece.

Rick describes the homes of Amish in Lancaster County as “mansions” compared to those of the Amish living across the state in this settlement.  “They are lucky to have a respectable coat of paint on the house and barn,” he notes.

It’s a little unclear just which of the three groups this shot belongs too. 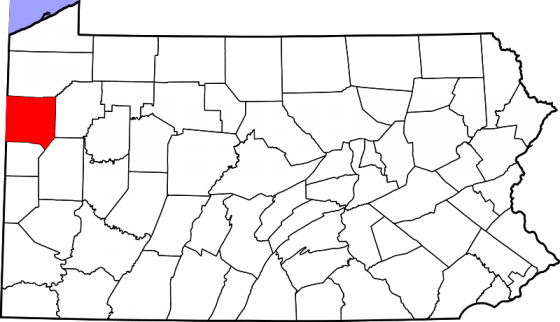 The black Ohio-style buggy is definitely different from that of the Amish in nearby New Wilmington, though Rick says that he was nearly certain that New Wilmington-style buggies existed in the area.  A possible explanation comes from a writer in the New Wilmington directory who notes that “probably half of the Amish population lives in Mercer Co., but still go by Lawrence Co. people.”

The fairly large New Wilmington community does indeed straddle the county line and exists in both Lawrence and Mercer Counties, though a good bit further to the north than Jackson Center.  Or, possibly at least one of the 3 Mercer County-listed communities may be a New Wilmington spin-off.

Pennsylvania currently lists 54 settlements, the highest total of any state, and Amish here as in other states frequently form new communities, such as the Big Valley daughter settlement of Renno Amish at Sinking Valley.  Since 2000, at least 7 new settlements have been formed in Pennsylvania, which currently has the second-highest overall Amish population.