We’ve seen three stories in the media in just the past several days, of people who were born and raised Amish – but ended up leaving the church under widely differing circumstances.

First a note: when we speak about “leaving the Amish”, this can mean more than one thing (at least the way it is used in the media).

One case are those born into the Amish, but who never choose baptism. These people are sometimes said to have “left the Amish” even though they were never technically members of the church.

Then there are those who are baptized Amish, but later decide to leave the church. These are the ones who are excommunicated and face social shunning (to varying degrees).

I would even include another category considering one of today’s stories – those individuals whose families left the Amish when they were young children, so they essentially had no say in the matter.

Each of these stories illustrates a different pathway that Amish-raised people have taken when moving outside of the church and into an English life. Some stories are fairly common, following a similar pattern. One which fits the latter category is that of Malinda Dennison, who grew up Amish in northwest Pennsylvania.

This first story has an unusual angle – Malinda Dennison left the Amish, then later joined the army. It’s unusual because the Amish are a people of nonresistance, which precludes service in military or law enforcement positions. Here’s Malinda in her army gear:

Malinda comes from the Amish community at Spartansburg, PA. It’s a little unclear what her situation was when she left the community ten years ago (i.e., whether she was baptized or not). Malinda later got her GED and her CNA certification, and met her future husband, a sergeant in the army, while in college. It was he who inspired her to become a soldier, as detailed in the article on the Army website.

“We were taught to get up early in the morning and work, and that is what we do here,” she said.

Ross agreed that her Amish background has its advantages when adapting to new situations like initial entry training.

“I think it gives her a mental advantage over the culture shock most experience when they first join. Malinda grew up with a strong work ethic, and a great desire to succeed. She doesn’t like the idea of giving up,” he said. “Her upbringing gave her the ability to adapt and excel in everything she does.”

It would be interesting to know more about what motivated Malinda to go in a direction in such contrast to the mores of her religious upbringing, or how her relationship with her family is now.

That said, the Amish relationship to military and law enforcement is in my view rather complicated, as national defense is what safeguards liberties many of us take for granted today, like freedom of religion (one thing that made this land such an attractive place for the Amish to settle in the 1700s and 1800s).

And Amish for their part seem to really appreciate contributions of law enforcement and cooperate with law enforcement on multiple levels (for instance, on drug and substance abuse issues, bike safety education, or even helping with an undercover sting to catch a predator). And of course, the Lancaster community greatly valued the response of law enforcement following the Nickel Mines shooting incident in 2006. One of the officers who later passed away was hailed as a “hero” to the families involved.

17-year-old leaves behind family of 14 (Wisconsin)

John Shrock’s story is one which seems familiar to many seen in the media – someone raised in a traditional community who leaves after feeling oppressed by the lifestyle and expectations. It reminds me of some of the stories in the film The Amish: Shunned or that of Emma Gingerich, who left her Swartzentruber community.

John, who has 11 brothers and sisters, left at the age of just 17. He relates a strange story of an incident with his father which appeared to be the breaking point:

Shrock grew up on a dairy farm in an Amish community in Wisconsin, where he says he was constantly trying to live up to perfection.

“If you want to go to heaven, you have to be a good Amish kid. So I tried to be the best,” Shrock said.

His best never seemed to cut it especially with his father.

“He was offended because I called him prideful. He just walked away but later that day, he was like well, since you know everything now, you have to punish me. So I had to spank him with a whip,” Shrock said.

That made him realize feeling emotionally tortured just wasn’t worth it anymore.

John subsequently left a note behind with just two words: “I left”. He found refuge in what is described as his “adoptive” family, that of another formerly Amish man who left his community 15 years earlier. 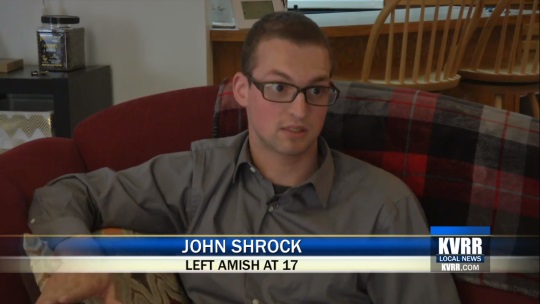 The video in a report from KVRR shows John appearing in some happy scenes with his new family. He seems like a sharp and likable young man, and seems content being where he is now.

Benjamin Miller and Ella Yoder are about to graduate from high school in Sullivan, Ohio. The cousins were raised Amish and are the first in their families to attend public school (or at least in Benjamin Miller’s case).

Both of their families left when these two were young children. As described in the report for Fox8, “It’s a decision their families made to give them a better education.” I would suspect there was more to it than just that.

Ella notes that her grandparents remain Amish. She sounds hopeful that they would approve:

“I think that no matter all of the troubles that have been in my family with us leaving the Amish, I think they would still be very proud of us as their grandchildren,” said Yoder.

Benjamin will study and aeronautical engineering and Ella will go into nursing. Ella’s mother sounds proud:

“I’m very proud of you and everything you have accomplished,” said Ella’s mother, Lisa, trying not to cry. “It kind of all comes together. All the years, everything we’ve went through, it comes together here. It’s very, it’s been an emotional week leading up to it.”

These three stories illustrate that “leaving the Amish” can lead to many different scenarios. In the film The Amish: Shunned, or in Emma Gingerich’s accounts, you can often sense the negative emotions that remain.

In all three of these cases, the people involved seem positive about their current circumstances and futures, though their relationships with the communities they’ve left behind are not explored in great depth.