New Order supper and a different sort of haystack

I had a chance to catch up with a couple more friends the Thursday before last–‘Martin’, a minister of the New Order Amish persuasion, his wife, ‘Annie’, and their neat kids.

My timing was perfect–suppertime!  A grinning Martin plunked me down in front of a ‘haystack’–a potato-lettuce-chili-cheese- crumbled nachos concoction Annie had just prepared.  Yum.  (Yeah, I definitely had seconds).

As we dug into our haystacks, Martin eagerly questioned me about life in Poland.  Many Amish I know are fascinated to learn about faraway places.  I asked Martin if he’d ever flown, as unlike the Old Order, New Order Amish often allow air travel.  He actually hadn’t.  Martin sticks pretty close to home, where he is involved in a produce and agriculture operation.

Martin explained that his congregation strongly encourages working at home.  It’s okay if church members work out, but about 75% of their congregation has home-based occupation.  New Order Amish seem to have a strong tendency towards farming in particular, somewhat counter to the general Amish trend away from it. 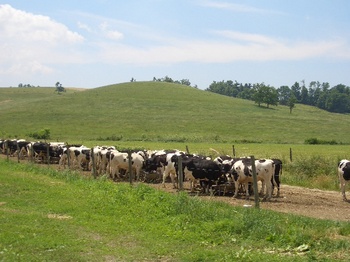 New Order Amish use the horse and buggy too, but are somewhat more liberal on the phone and electricity, often having it in the homes.  Dress is similar, with men’s beards generally cropped a bit shorter and neater.

Sometimes Amish kids who are just learning English have a funny way of talking.  Martin’s youngest boy is a good example.

He’s a pretty excited kid, and quite outgoing, unusual for Amish children who usually sit silently when an outsider is around.  A number of times he jumped into the conversation Martin and Annie and I were having.

‘We went fishing at ‘Bill Miller’s’ and we saw a (switches to saying something in Dutch)…and then there was a turtle and he (Dutch again)…and then I yanked him off my finger!’

This little guy didn’t even break eye contact as he bounced between languages, just assuming I could understand both.  Martin patiently translated, filling in the gaps.

After knocking back a slice of Annie’s homemade strawberry pie plus vanilla ice cream, Martin ‘got into it’ with me.  Another characteristic of New Order Amish is that they tend to lean a bit to the ‘evangelizing’ side, though compared to other evangelistic branches of Christianity, it’s still pretty tame.

I recalled that last time I was around we had a similar talk on the Anabaptists vs. the Catholics.  Martin likes to challenge me on my faith and I can appreciate that.  They are both very respectful of other religions, as Annie explained, ‘don’t get us wrong, we don’t have anything against Catholics.  They can be very good people too.’

New Orders are also unusual in that they publish their beliefs in what you could call promotional literature.  Last time Martin gave me an explanatory tract on Amish belief.  Another New Order Amishman who recently completed a survey for me included two pamphlets in the envelope. 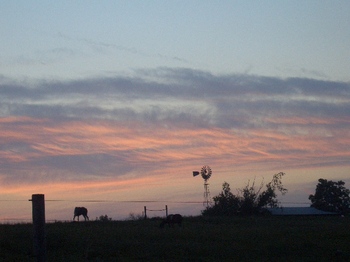 I don’t consider the somewhat in-your-face approach to be self-righteous or off-putting.  I see it more as a reflection of the depth of their conviction, something to be admired. In any case, Martin enjoys ribbing me a bit.  I like to rib back.  I’ll be stopping by again in September.