I need no mansion here below…

…is the title of the hymn we sang the other morning after breakfast at Abe’s.  Abe and his wife Sarah like to sing a song and read a chapter from the Bible before starting the day.

The Amish enjoy music. Last Wednesday, Daniel was out late at a singing at a neighbor’s.  Amish men get together, usually once a week, to practice the high German church hymns which mark the beginning and end of church service.  The youth have their own singings as well, a prime time to become acquainted with the opposite sex. 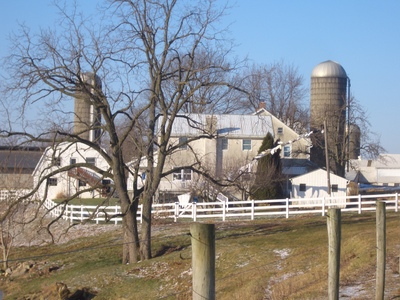 By last Sunday night I had moved to Abe’s, just a couple farms over from Daniel’s.  Abe’s parents and seven of his brothers and sisters came over and we sang for about an hour in English.  The hymns came from an old songbook and had titles like ‘Heavenly Sunshine’, and ‘Must I Go and Empty Handed?’.  Most dated from around 1900.

While Abe does not get involved with stringed instruments, he does play a mean harmonica.  On my first morning after breakfast he got it out and ran through five or six hymns.  Sarah plays as well, though she was too busy cleaning up to get in on the action.

Even Abe’s son, 18-month old Elam, has his own.  The little guy was feeling a bit under the weather and ended up falling asleep on Abe’s lap that morning as he played.  A few minutes into it, Elam woke with a start–inadvertently sounding out a couple of notes on the harmonica which he’d continued to grip in his mouth and in his little hands as he slept.

An online resource on the Amish and other Plain people, including Mennonites, Hutterites, and other Anabaptist groups.
©2008 Amish America
«»