A few weeks ago we passed 30,000 comments on this website. I appreciate all of them (well, almost all of them 🙂 ) and just want to thank each of you who takes the time to share your thoughts with the rest of us.

I’m not always able to write a personal response, but nonetheless the comments section remains one of my favorite parts of running this site. Thanks to what you share I have been exposed to different perspectives, been made to laugh, think, and learned a lot.

With that in mind I wanted to draw attention to a comment posted by reader Sadie. I have meant to return to this comment since first reading it about a month ago.

I can’t do justice here to the big questions she raises, but it’s interesting to think about them. I’ll just say that it seems each generation tends to think the one which follows takes things a little further than they ought.

Maybe it’s just human nature to think that way. I even catch myself doing it, and I am not yet a greybeard (though as I was reminded by the refreshingly blunt Amish lately, I am becoming, in so many words, a “greysides”).

This post’s big question title, for that matter, comes from an observation near the end of Sadie’s comment, excerpted here:

This article made me think about how time and change have affected various Amish people and subgroups at perhaps 50 year intervals.

I wonder how much the lives of the “general” Amish people differed at each of these half-decade points; would life as one’s parents or grandparents even be recognizably Amish by the younger generations, and did older generations even contemplate the shifts that would mold and split the Amish communities even more in the future?

What was the dress like at each point, what areas were the Amish inhabiting, and how well were they accepted by the English?

Was their manner of dress ever indistinguishable from that of the English, and when did it begin to stand out so greatly as it does today? 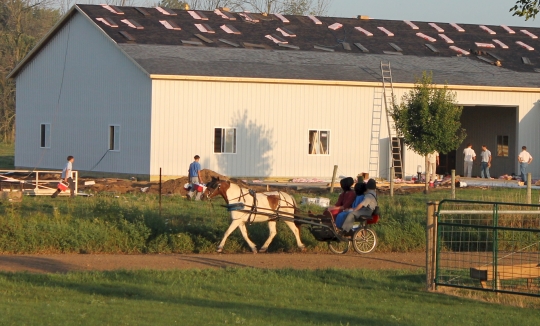 Will scenes like this someday appear quaint to Amish eyes?

What technologies, liberties, or teachings of various Amish churches or districts were once considered to be entirely inappropriate, that now have been adopted, and how do different generations among today’s Amish view the norms, mores, and Ordnungs of years past?

What changes may be adopted in the future — and, will those changes have an impact on the sustained existence of the Amish people, culture, and religion?

I think it’s difficult for those of any generation — whether Amish, English, or whatever — to truly comprehend the past as it was lived by their predecessors. I believe it’s likely equally hard to imagine what life will be like for one’s descendants.

How life might differ for our descendants is a fascinating, abstract, and slightly scary, thing to ponder.  In light of Sadie’s questions, my impression is that Amish people probably think more on average than English about how decisions made today will affect grandchildren and great-grandchildren.

Though Sadie is probably correct that it’s difficult to imagine the future, that doesn’t mean one can’t try.

Any bold (or timid) predictions?  Should we be optimistic or pessimistic?  How might life be better or worse for those to come?