Two Amish horse owners have been fined $300 each for leaving their beasts in the heat at a Lancaster Costco.

You hear a lot of stories of Amish treating horses poorly.  These cases bring out strong reactions to the Amish as a whole (if you can stomach pure bigotry, check the Facebook comments on this story). 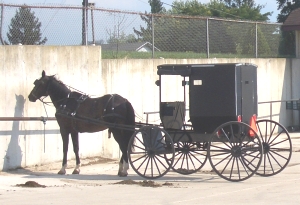 That noted I think it’s another area where it’s easy to paint a “the Amish” type of scenario (ie, “the Amish abuse their animals”).

Well, I am sure some Amish do.  But whenever someone starts to unload on the Amish for being animal abusers, I stop and ponder a second.

First, if you treat a horse badly and it dies, you have no horse.  New horses aren’t cheap.

In other words, when horses are such an important part of your life, mistreating them seems kind of stupid.  Kind of like never changing the oil or rotating the tires.

Second, yes, Amish own horses mainly for practical purposes.  And it’s safe to say–Amish view animals differently than your average suburbanite.  The relationship is a little different.  A greater distance, perhaps–more typical of farmers and folks of a rural background.

But that doesn’t mean they don’t develop affection for their beasts.

One example: a Lancaster Amish friend recently shared word of the death of an old horse, one he’d had since courting days.  I wouldn’t say he was in mourning–but there was a heavy heart there.  Like he’d lost an old pal.

A farmer friend speaks warmly of Randy, a work mule who obviously enjoys being petted (unlike his buddies).  Amish have been criticized for dog breeding practices, but also keep dogs that are not only expensive but become a “part of the family” (or nearly that).

So you see what I just did there.  Just like people with horse horror stories, I can share warm examples of Amish and animals getting along just dandy.  Great.  I suppose that doesn’t prove much either, other than you can find examples of good and bad among Amish.  Which I’d guess to be the case among other groups of people as well.

Do we see more cases of abuse among Amish though?  Or maybe–do we just notice them more since, a) the Amish get more attention in general, and b) they are among the few peoples whose day-to-day lives are still closely tied to animals?

I really don’t know the answer.  All questions to ponder though.  I’ll just say I am continually amazed at how much some people openly hate the Amish (again, if you feel you need to, see those Facebook comments).  I don’t know how you’d get away with saying the same so brazenly–and again, these are Facebook comments, so real names are attached to the commenters–about any other group of people.

Really, I am almost embarrassed for some of these people.  Animal cruelty is terrible, and I can understand people getting mad about that.  But can’t they see what they sound like?  The internet is forever, guys.

I started this post off as a straight-up what-do-you-think-on-this-issue post, but seeing these responses took me off on a little tangent here.  Now back to the Costco case.

The details to the Costco story present a picture of horses in serious distress–“panting and swaying”, “near passing out” and with “banged-up” legs to boot.

I don’t know the mechanics of a horse well enough, but I know a lot of you do.  How well do they take heat?  99 degrees seems warm whatever way you slice it.  I’m a human (yes, I know I had to point that out), but sun exposure like that sure beats me up, even after a short time. 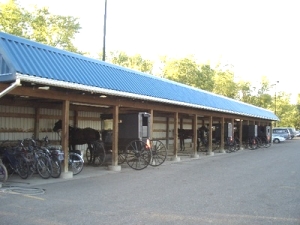 An Amish horse shelter in a Wal-Mart parking lot

I don’t know how long the owners were inside shopping.  Maybe they got stuck in a long line.  But if you’ve got visible signs like that, it seems like a hot lot is the last place to stick your horse.

Which brings up a third element–no horse shelter.  You typically see them at businesses in Amish areas. Costco did not have one installed (which surprised me a bit, as big retailers usually do).

So: is this abuse?

Are Costco and others to blame for not having horse shelters?

Should the Amish and other horse-and-buggy folks just stay home on hot days?