Amish Teeth: From Dentures to Braces

Back from vacation–and thank you for all the nice wishes.  It was a (mostly) restful week spent at the ocean with family, with no sunburns, and a little extra sleep, so I guess I’m coming out ahead here.

After a week off there’s a lot out there to comment on. This might not be the most important news in Amish America, but over the last week I’ve been hearing about one of the young stars of the TLC “reality” show Breaking Amish having dentures.  Apparently she is getting picked on by one of the other characters (not the most uplifting show, this Breaking Amish, if you hadn’t suspected). 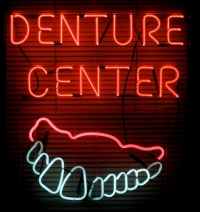 It is hardly unheard of for some Amish individuals–even rather young people–to wear dentures.  For a variety of reasons including convenience and cost some Amish (particularly in more traditional groups) may be less apt to visit dentists for preventive care.  When problems occur it may make be simpler and cheaper to yank rotten teeth than to try to repair them.

On the other hand, on my recent travels I ran into young Amish people with braces.  I don’t think you’d find a lot of Swartzentruber Amish wearing braces (don’t know if that would be explicit in the Swartzentruber Ordnung or just understood).  But these mainline Amish didn’t seem to have a problem with a little proactive cosmetic smile correction.  Another illustration of the “different strokes” you see in Amish society.

Did any of you readers ever wear braces?  I did for awhile, but just on four upper teeth.  At that time–early teenage years for me–it seemed like every other person my age had a mug full of steel.  Of course I do remember some of the teasing names (“brace face”, “metal mouth”, etc).  Is the same stigma still attached to wearing braces today?

Dentures as a teenager is another story. It can’t be easy being a young person with dentures, at least outside of Amish society (and I’d think even in it).

While we’re on the topic, we actually had an interesting discussion on “Amish dentistry” last year on the Unusual Amish Occupations post.  Rich Stevick, who’s actually witnessed an “Amish tooth doctor” at work, had this to say:

Tom Keenan’s mentioning a denture maker reminds me that there are several Amish “dentists” plying their trade. The one I visited (observation only) had been threatened by state dental authorities to cease and desist of face sizeable fines. He told me that the authorities would have to put him in jail first because he was doing a needed service for the community.

I asked him about wisdom teeth extraction, and he told me that after making a cross cut on the overlying gums of impacted wisdom teeth, “most pop out as slick as a whistle.” (He had utmost confidence in his abilities and received novacain from a source in Florida.) I watched him pull two badly decayed incisors from a 15 year old Amish girl, after which he held one up, with its long pink root, for her to examine and admire–amazing.

He could not charge for his services, but at that time, I think he received about $15 as a “contribution” for each tooth. I asked him if he ever tried to fill teeth,and he opined that if he would do that, the authorities would definitely crack down on him. “That’s where dentists make their money,” he stated.