The First Amish Settlement in Canada

In February we had a look at the first Amish settlement in North America, located at Northkill in Pennsylvania’s Berks County (founded approximately 1740).

I recently came across an interesting Ontario historical blog with a photo of a plaque marking the location of the first Amish settlement in Canada, which came about some 80+ years after Northkill. 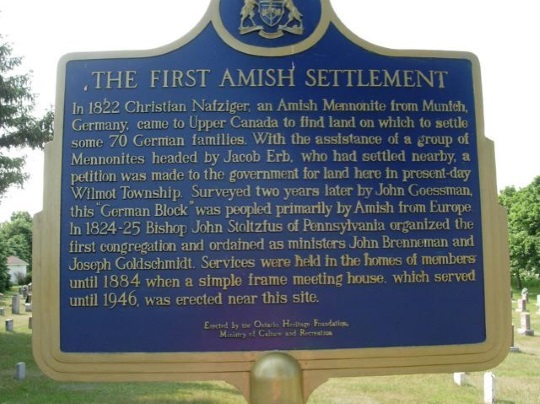 Here’s the text from the plaque:

In 1822 Christian Nafziger, an Amish Mennonite from Munich, Germany, came to Upper Canada to find land on which to settle some 70 German families. With the assistance of a group of Mennonites headed by Jacob Erb, who had settled nearby, a petition was made to the government for land here in present-day Wilmot Township. Surveyed two years later by John Goessman, this “German Block” was peopled primarily by Amish from Europe. In 1824-25 Bishop John Stoltzfus of Pennsylvania organized the first congregation and ordained as ministers John Brenneman and Joseph Goldschmidt. Services were held in the homes of members until 1884 when a simple frame meeting house, which served until 1946, was erected near this site.

Erected by the Ontario Heritage Foundation, Ministry of Culture and Recreation

The plaque location is given as follows:

The Region of Waterloo
The Township of Wilmot
In Baden, at the southeast corner of
Snyder’s Road West and Nafziger Road

The oldest Amish settlement in Canada today is the Milverton community. Is this the same community as commemorated on the plaque?

Though founded at about the same time, it’s unclear to me if this is the same settlement that has led to the present-day Milverton Amish settlement.

The town of Milverton lies about 20 miles to the northwest of this historical plaque; the current Milverton congregations are located mainly to the north of the town itself.

At the 2016 fall meeting of the Mennonite Historical Society of Ontario, Fred Lichti gave some history of the area’s Anabaptist settlers:

When the Amish first came from Europe to Waterloo Region in 1823, they settled west of Kitchener and then spread from there. By 1874 they were moving into Mornington Township, where Milverton is located. When some Amish began building meetinghouses in the 1880s, the Amish of the Milverton area did not all agree, resulting in a split. The progressives built meetinghouses and eventually referred to themselves as “Mennonite,” while the traditionalists are the people we now refer to as “Amish.”

So it’s possible this is the same community, and today’s Amish at Milverton are descendants of the traditionalist side of the split who migrated in the direction of Milverton (this would be my guess).

Or perhaps this plaque commemorates a separate settlement from current-day Milverton altogether, founded at about the same time. I haven’t been able to find a definitive source on this point.

While we’re on the subject, Milverton is not only Canada’s oldest, but also its largest Amish community, at 12 congregations in size. Here’s more from Lichti’s talk on the Milverton Amish:

These Amish in the Milverton area have continued to worship in homes on Sunday mornings. They had little growth for nearly 100 years, but since the 1980s and 90s they have grown rapidly, and their population has doubled since 1999. The Milverton Amish tend to have more traditional dress than many other Amish communities. They also do not use covered buggies, and their buggy wheels have steel rims. According to Lichti, common surnames in the Milverton area are Kuepfer, Albrecht, Jantzi and Streicher, names that are not common in other Amish communities. 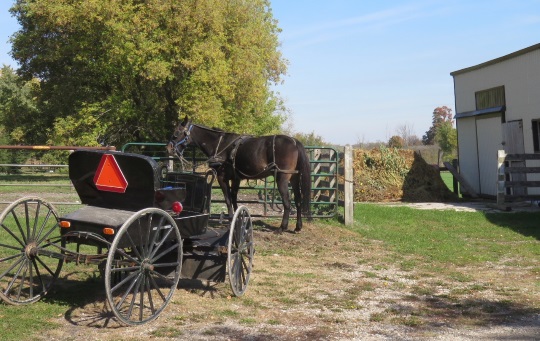 An Amish buggy at Milverton, ON. Photo by Barb Draper/canadianmennonite.org

Another observer of the Milverton Amish, retired Amish Mennonite pastor Glenn Zehr added the following, about the changes he’s seen in the group.

One interesting thing is that they hire outsiders to do custom farm work with equipment not normally used by Amish:

In times past the Amish did all their field work with horses, but today it is not uncommon to see large equipment in those fields, hired to do custom planting and harvesting. Although the Milverton Amish do not own cars or tractors, some building contractors own trucks that are driven by their non-Amish employees. Zehr said he wouldn’t be surprised if they change their position so that tractors are allowed within the next ten years or so, since they are hiring so many custom operators to do the work in the fields.

Phone usage has been evolving:

Since the 1990s, telephones have come to the Milverton Amish, but not in the houses. Little telephone booths are near the end of the lane or at least some distance from the house. They usually have some type of message system since there is rarely anyone available to answer the phone directly. Zehr also thinks that there are some cell phones or maybe even smart phones used by the Amish, but probably they are not carried openly since officially there is no approval for this practice. He assumes their position on cell phones is changing.

As have travel customs:

Another change in more recent years is the amount of travel done by the Amish. In earlier years Amish families would only hire a driver for long-distance health appointments, but these days they frequently hire drivers to visit relatives, to go shopping, or even to travel as tourists. Like other Old Order groups, the Amish do not fly, but recently a group travelled to Europe by ship to participate in a heritage tour.

Several years ago, I included this community on a list of Amish settlements I want to visit. Still haven’t made it there. Another interesting bit: In 2016, Herald Press published Simple Pleasures: Stories from My Life as an Amish Mother, by Milverton Amish church member Marianne Jantzi. You can read an interview with Marianne here.