Today we continue with part 2 of our interview with SUNY-Potsdam Professor of Anthropology Karen Johnson-Weiner.

Karen is the author of the recently-released book New York Amish: Life in the Plain Communities of the Empire State.  New York has proven an especially attractive destination for Amish in recent years, and is now home to over 12,000 Amish. 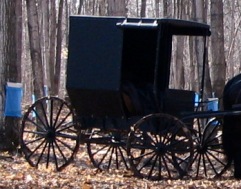 She also shares insights on why some Amish settlements fail, and discusses prospects for further migration into the state.

If you missed the first part of the interview–or would like to know how to enter the book giveaway contest–go here: New York Amish interview, Part 1.

Amish America: One recurring theme in your book New York Amish is the desire of many Amish migrants to preserve an agricultural lifestyle.  How successful has this been for Amish settlers in New York?  What difficulties have Amish encountered in seeking to maintain farming occupations?

Karen Johnson-Weiner: New York has offered Amish settlers access to cheap farmland, and most have thrived.  They have had to create markets and adapt to a growing season that is shorter—and more challenging—than some have been used to.  Many have become dairy farmers.

For Swartzentruber farmers, this has led to the acceptance of bulk milk holding stations—a change in the Ordnung that enabled young farmers to continue shipping milk even after the demise of the local cheese plant. 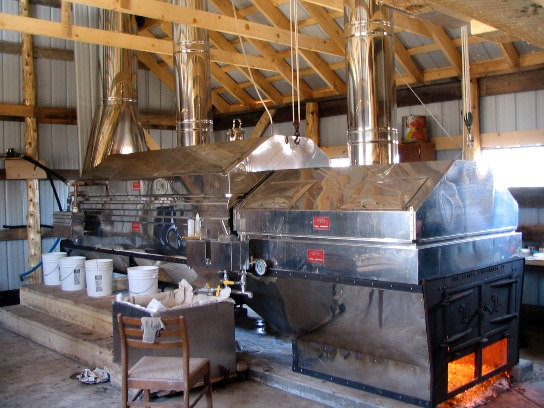 AA: In addition to agriculture, you detail the extensive business activity in some New York settlements.  I particularly found interesting the Swartzentruber Amish quilters who embroider dates and initials, or produce NASCAR-style quilts for their English customers, design innovations they would not allow for quilts used in their own homes.  In what other ways have New York Amish businesses adapted to their markets?

KJW: I mentioned the decision of the Swartzentruber communities to allow bulk milk holding tanks—a change, by the way, that is permitted only in those communities in which farmers don’t have access to cheese plants.  Cheese plants are a market for grade B milk, which can be shipped in cans; bulk milk tanks allow the farmers to send grade A milk. Amish farmers in many areas have benefited from dairy cooperatives, in particular Dairylea and Agri-mark. 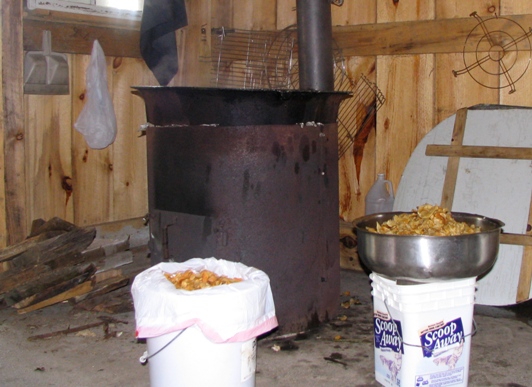 Adaptation has meant finding products that sell.  Local Amish women are constantly trying new patterns for quilts—or sewing new items.  Two come to mind—“quillows” (a quilt that fold up into a pillow—one local farm stand advertises these with a sign reading “great for college students”!)  and handbags with a pieced design. 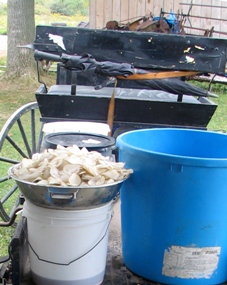 Amish men have turned to shed and gazebo making, harness shops, saddle making, and leather work.  In upstate New York, the market for many of these items is in Canada.  One man in the Mohawk Valley produces wooden toys that he markets in shops around New York.

Probably one of the most interesting adaptations to local markets is the Swartzentruber family that found assembling lacrosse sticks to be a lucrative enterprise—the entire family gathers around the table, eats popcorn and other snacks, and weaves the string netting onto the plastic frame.  The youngest child burns the end of the nylon tie with a lighter so that the string won’t unravel. 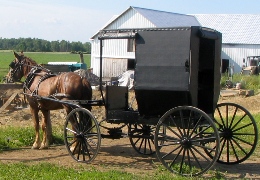 A Swartzentruber Amish buggy outside a newly-built home

Sometimes new settlements face environmental, personal, and economic forces external to the group that threaten the well-being of community members.   For example, if a new community immediately runs into difficulty over local building codes and it doesn’t appear a compromise can be reached, many may decide it’s not worth the trouble to stay.

Some, like the first Amish to settle in New York State simply stop identifying as Amish—the settlement is still there (180 years later!), but it’s not an Amish settlement. Ultimately, whether a settlement succeeds or fails depends on circumstances that are peculiar to the group.

AA: Finally, is it likely that Amish immigration to New York will continue at high levels in future?  What factors might influence migration into the state?

KJW: When Amish settlements grow too large and land prices climb too high, when there is internal conflict, or when events in mainstream society make life difficult, Amish families will move. And as long as farmland is available and the prices are reasonable, I think New York will be a popular destination, and the Amish will continue to come. 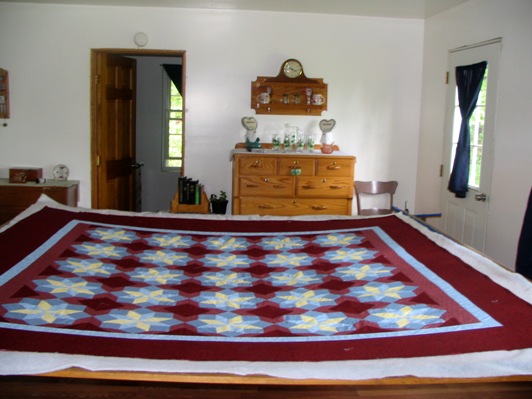 However, the decision to resettle in New York is very much a conservative one—by that I mean that the Amish who have come have chosen to remain farmers or have decided to refocus the economic base of their church on farming.  Many could have stayed where they were and taken up other businesses (as has happened in Lancaster County) or modified their Ordnungs to permit new employment options.

These newcomers have chosen to act on the traditional Amish belief that farming is the ideal lifestyle for the Christian.  This means that they are likely to be less willing to compromise on their faith and traditions—and more likely to come into conflict with local statutes and laws.

The more there is conflict, the less likely new settlers are to see New York as a destination.   In my opinion, this would be a shame, for the diversity of Amish settlement further enriches New York State.