A few weeks ago, a fire broke out in a home in the Harmony Amish settlement, the largest in Minnesota. A bishop and his 18-year-old-son lost their lives. 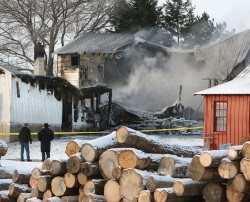 Aftermath of the fire. Photo by Ken Klotzbach

Since that time, both the local Amish community, as well as English neighbors (for anyone new, “English” is the term most, but not all, Amish use to refer to non-Amish people) have come together to help the remaining family, including the bishop’s widow and another son.

This cooperation was covered in a couple of moving articles published over the weekend. First, from the Minneapolis Star Tribune:

Shortly after a fire tore through an Amish home 14 miles south of Lanesboro, killing two men, a call went out for help. In southeastern Minnesota, where the Amish and non-Amish coexist but rarely intermingle, the call was heard by everyone, said local resident Mary Bell.

Hundreds of Amish have stopped by the property since the Jan. 11 fire, but so, too, has a contractor with heavy machinery, bakers donating pies, visitors with donations of food and cash for the family, and others. It’s been a comforting reminder that the Amish and non-Amish communities can rely on each other when needed, said Bell.

“There is an incredible exchange within southeastern Minnesota with the Amish. It’s really quite remarkable,” she said.

Mary Bell helped organize funds and donations for the family:

Three days after the fire, Bell was at yoga class and decided to ask others to help. Within five minutes she had collected $400. A man in the class said he would ask for more donations at a Lanesboro pub that evening, eventually pushing the total collected to $500.

Bell and others used some of the money to buy locally grown cabbage, potatoes, carrots, onions and beets.

“When we unloaded the food at the Amish home we were told how much it meant to them to have our community support,” said Bell. She asked what else the Amish would need. An Amish woman told her more bedding, so Bell asked friends and neighbors to help, and made a second delivery.

Others donated food including hams, turkeys, a steer and pigs. A local contractor used equipment to clear debris, saving the Amish from having to do it by hand.

A member of the Amish community shared what it meant to them, as reported in the Rochester Post-Bulletin:

He pointed to the hard, cold work firefighters from Canton, Mabel and Harmony did to put out the fire and find the bodies. The night was cold with a brutal wind chill that froze water on the ground, or on firefighting suits yet they were there and the Amish are thankful, he said. He also said Kaase was very caring and was at the funeral.

Hershberger said he tries to help the English too. If there’s a fund at a local bank, he puts in money for someone who’s fighting cancer or some other need, he said. “Maybe we don’t reach out far enough,” he said.

Hershberger said he doesn’t see the money put into English funds as something that he will get back but “just a helping gift … step up and help.”

Last week Rebecca Miller shared an example of Amish aiding non-Amish disaster victims. Today’s story is an example of how aid can and does go the other way, with the Amish side graciously accepting the generous aid from outside their community.

In the end I suppose it is simply what true neighbors do for one another–no matter the religion or culture one belongs to.