Does anyone still write letters?

If you’ve been following the Kentucky Amish SMV case, you know that some people still do. Jacob Gingerich of Graves County, Kentucky recently wrote 138 letters to KY legislators explaining the Swartzentruber Amish position on the safety triangle.

Thanks in part to Gingerich’s efforts, a compromise bill acceptable to his people has quickly passed the KY Senate and is now moving through the House with momentum.

I’m having trouble remembering the last time I wrote a letter. I don’t think Christmas cards or postcards count. Five minutes staring at the screen here and I’m still drawing a blank.  Probably to Amish friends a few years ago.

It makes sense that Amish would send and receive more letters than we do. On the other hand not all Amish are letter-writers.  Just going by the handwriting of some Amish people–like with us English, more often men (Amish women tend to have finer, often impeccable penmanship)–not everyone’s comfortable penning daily missives (though I’m hardly one to talk, I had doctor’s handwriting in grade school and surgeon general’s handwriting today). Still, letter-writing is strongly rooted in Amish culture as a whole, as we see in things like the circle letter tradition and even in the rare bit of political activism.

Power of the Pen 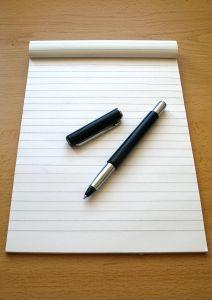 Is there any chance of letter-writing reviving in “English America”? We do see certain cultural elements come full-circle and return to some role in mass society. Often they are aspects of fashion, like bell-bottoms or muscle-car styling.  Less so with technology, unless it’s a limited connoisseur market (say the minority of music aficionados who listen to vinyl records or English hobby farmers using horse-drawn equipment to reconnect with the land).

Technology is more about what makes sense and gets things done effectively rather than being fundamentally about aesthetic appeal.  Which is why it’s harder for old technologies to have big comebacks.  Letters are really just a technology–one that’s been superseded by a wide range of instantaneous messaging that just gets the job done a lot more efficiently.

That said there are intangible aspects to letter-writing that make it about more than just getting info from point A to point B.  The act–the taking the time to write a letter–sends a message in and of itself.  Perhaps that’s why the 138 Kentucky legislators were moved in the Amish direction.  All I know is that when I do receive the occasional hand-penned letter, I never hit “delete”.

Maybe there are enough letter-writing enthusiasts out there to form a nucleus for a future revival.  Perhaps people, craving simpler ways of being, will consciously return to writing letters en masse.  Or maybe letter-writing will turn trendy, becoming for some a “retro” leisure-time activity indicating status and a wealth of time.

But ultimately letter-writing is the harder, more time-consuming choice.  As a society we’re more and more allergic to that kind of option, so I am skeptical.

What do you think?  Do you ever put pen to paper anymore?