I met Bob by accident, or fate, hard to know which it was. He and I spent three hours together one Sunday morning in September, walking the countryside, my Sunday shoes getting wet from the dew. He was a good listener, but he often got bored and wanted to run. He is young so you have to forgive his wandering attention.

Bob has four legs and is less than three feet tall. If you’ve taken a look at the photo already, he is the one with the halter.

Here is how I met Bob (and yes there is an Amish connection).

A colt out of nowhere

I tried to develop the habit of getting up early on Sunday and going out and taking pictures. On this particular Sunday I was retaking pictures of an old barn that my landlord had told me about. I was on my way back home to pick up my wife and take her to church.

I was on a country road approaching the “busy” road of SR 120 and here came this little pony colt running full blast down the hill straight for my van. So I stopped because I didn’t want to hit him. It was out of my control if he ran into me which looked like a distinct possibility.

I put the van in park and stepped out as the colt ran past the front fender of the van. He stopped as I stood in the open driver’s door.

He looked at me and I figured I’d better get ahold of him or his time on earth would be short as he apparently had no idea that cars, trucks or a semi could do him damage. I assumed something on the busy road had spooked him and caused him to come running down the hill.

I tried to reach out, and calmly walking toward him, tried to get a grip on his halter. He moved away, backing up, not turning around to run, but it was clear he was not going to let me get my hand on that halter.

So I turned and walked back to the van which still was running. I turned off the van and started to shut the door. As I turned around the colt was almost under foot.

He let me grab his collar and we spent the next few hours wandering the countryside looking for someone, anyone, but no one was home.

Where do you belong?

I figured the colt (Bob) belonged to someone Amish as he was pretty easy to handle. He had obviously been around people and was “halter trained”. And he had on one of those blue plastic halters that seem the fashion preference of Amish equine.

But the halter was too big and it was hard to keep him in it as he would pull his head to the side and his nose would be out of the loop that was where his nose was supposed to me, making it somewhat hard to get Bob to go somewhere when that somewhere was not where Bob wanted to go.

A van of people who appeared to be Mennonites stopped and held Bob for a few minutes while I made a rope out of a towel I scrounged from the van. They had a special event at church so they had to go, but their stop really helped because now I had a rope!

We were walking as far away from the busy road as we could because the big trucks really bothered Bob. I could only imagine the disaster of him being spooked and running in front of one of those monsters semis.

Maybe they can help

Then we saw (I don’t know if the colt saw it or not) an Amish guy on a small farm tractor, pulling a wagon. In the wagon was an Amish woman who looked uncomfortable as though she was trying to balance herself on the two-wheeled, one-axle cart that was not made to haul people.

I waved my one free arm as big as I could. There was no reason to yell because they wouldn’t have heard me above the tractor noise and Bob may not have taken well to my loudness.

The Amish lady saw me and started tapping the man with great vigor.

They were over to me in a flash. They were obviously very excited because they were talking really fast and filling me in on all the details of the colt named Bob.

They gave me Bob’s pedigree. Information on who owned Bob, who owned Bob’s brothers and sisters. All the names of people were flooding at me, names I’d never heard and I was certain I would never hear again, but I tried to nod and look like I was taking it all in.

Bob had been Amish (I don’t know if he was aware). He’d been sold to an English couple with kids and the previous night was Bob’s first away from his Amish home.

His new owners were not aware he was missing. The Mennonite van had stopped at the Amish house as they obviously also thought Bob was Amish. So the Amish couple started up the lawn mower / garden tractor and began their rescue search for Bob, whom they knew was in the possession of a bald English guy with a rope made from a towel.

While we were there the new English owners showed up. It turned out that Bob and I were almost home (Bob was apparently unaware of this).

Days later we went back and got pictures of Bob. The picture below shows Bob, my wife, and Bob’s new owner who is just old enough to talk and who named Bob, Bob. 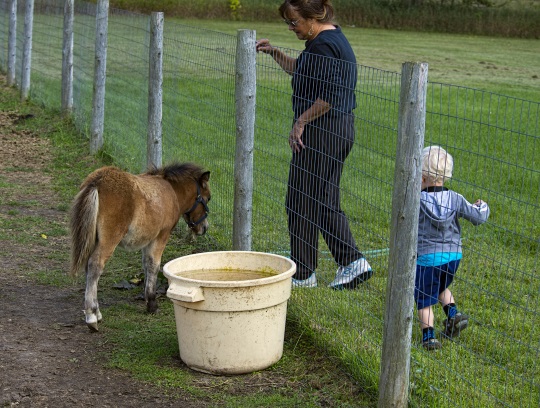 David Arment is the owner of Arment Gallery & Gifts in Shipshewana, Indiana.

Amish in the news

One “new” (and rather strange) story involving the Amish, and an update to one we’ve been following.

Remember the case of the Minnesota Amish couple charged with building a home without a permit, due to objections over a required septic system? News this morning is that the criminal charges against Ammon and Sarah Swartzentruber will be dismissed.

Today was meant to be their trial date. Apparently, the Fillmore County attorney wants to pursue civil charges instead. The couple’s criminal attorney says that the civil charges make more sense. Sounds like a positive for the Swartzentrubers, though the issue remains.

Here’s one you don’t see every day: a hit-and-run accident involving a buggy. But not the way they usually work. According to this story, the buggy driver was the one who “ran”(!)

This odd story showed up right around Christmas, so you might not have noticed it if you are in the habit of monitoring the news feeds for Amish-related items like I am.

Details are short on the Lancaster Online website, but here is what happened on the Wednesday before Christmas:

Debra Sensenig, 50, of Terre Hill, told police she struck the buggy after it cut in front of her and she was unable to stop.

She pulled over to look at damage to her vehicle but the horse and buggy fled.

Naturally, questions arise. The reader who passed the link along to me is also scratching his head. He writes:

Just with the given information, there seem to me to be so many things wrong with the story:

Two weeks later, no updates have been posted to my knowledge, so this one may remain a mystery.