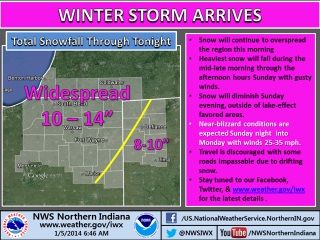 You know this is a real storm due to the many school cancellations and business closures in places where things don’t usually get canceled, including in the “toughest” of the winter states like Wisconsin and Minnesota.

What do Amish do when the weather is this bad?  I got an email Saturday from a reader in Indiana sharing how Amish in his area are handling church services (names changed):

The Amish around us are staying home tomorrow (Sunday). Polly Lambright said some districts let the members know they are canceling church, other districts just expect members to not show up if the weather is dangerous.

Polly’s husband Galen said that as a child he remembers the weather being so bad that no one showed up for church at their house one week.  They rescheduled it for the next week and bad weather came and again no one showed up.  This happened the 3rd week as well and they gave up trying to have church at their house and ended up moving it to the next house in the cycle.

Polly also said she remembers as a girl going to church and while the service was going the weather turned bad.  On the way home the horse died and they had to walk home in drifts that were up to her chest.

Since Amish have church in neighbor’s homes often less than a mile away, you’d think that would be easier than traveling by car long distances over treacherous roads.  On the other hand, roads can be dangerous no matter the vehicle you are in, and there are exposure risks for animals and humans alike.

Our reader follows up with an email yesterday:

They are having church in the district north of us.  But the only buggy I saw on the road this morning was one neighbor leaving. Sunday mornings are usually a very busy time.

How have you been affected by this winter storm?