I’ve wondered how the Amish will respond to this situation. Will they significantly change their social behavior? What about schools and church? Will mud sales continue? 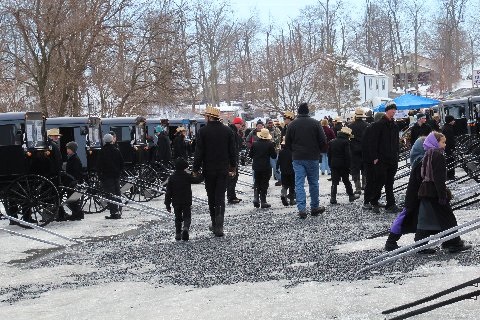 Also, how will it affect tourism and general business activity in their communities (which many Amish families depend upon, directly or indirectly)?

The answers to some of those questions remain to be seen. For others, we’re starting to get some idea. More on that below.

I have also asked a contact in Holmes County for some further news on how it’s affecting that specific community, and if I hear back I will share that.

He says that “so far the Amish are not paying much attention to it, but with the disruptions & closures, they will.”

Meanwhile in the media, I’ve seen several mentions of the Amish and the COVID-19/coronavirus pandemic – including in one rather strange story – but no further stories with the Amish as main focus.

1. The first article is on awareness in Daviess County’s sizeable Amish population. From the sound of things, Amish in the community are getting the word:

“A challenge that we have is making sure the information gets to our Amish community and our immigrant community,” said Butler. “The Amish population, they do travel. They do mission trips. They go to other Amish communities in other states.”

That worry is something the health department has been working to solve.

“The Amish community, we have seen them today,” said Sullender. “They are very aware of the information out there…The biggest problem will be with the changing information, to keep on top of it.”

This and the Lancaster Amish article are the only two I’ve found mentioning efforts to make Amish communities aware so far.

Those efforts may be happening (and probably are) either formally or informally in the many settlements across North America, but these are the only two communities I’ve seen coverage for. 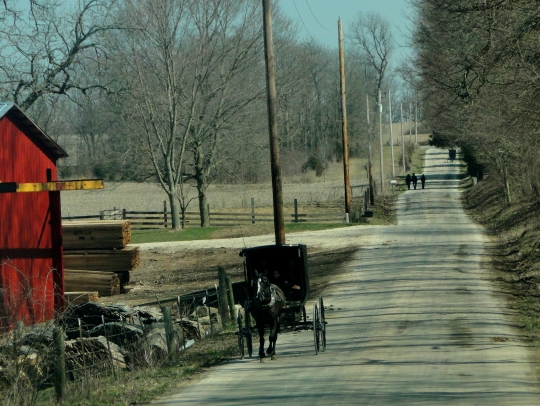 2. Next, Representative Ryan Dvorak of Indiana’s 8th District criticizes coronavirus testing in his state. In the article he mentions that he is frequently in contact with elderly Amish.

District 8 takes in the Daviess County settlement so I would assume he visits Amish in context of working with the community on things like buggy safety and other issues of concern.

Dvorak happens to have a brother in the Italian consulate in Milan (in the hardest-hit region of that country), so I would think he is getting some information firsthand that might not be showing up in our media.

3. A third, somewhat creepy story has a New York Post reporter observing men’s washing activity in a bathroom in the Penn Station rail terminal in Manhattan.

He counts up the total of visitors to the bathroom and notes how many failed to wash, later confronting them. One of the individuals he confronts is an Amishman.

While I agree with what the reporter is doing in spirit – I hate to break this to female readers if they’re unaware, but a lot of men don’t wash up after… – I’m not a fan of the tactics here.

But on the other hand, no pun intended, maybe some media shaming over hand-washing is warranted, especially given the current circumstances.

In one hour he found that only 4% of 519 people failed to wash, which to me, seems low compared to “normal times.” So it seems like people are getting the point, at least based on this one weird story.

How about Amish-related tourism in places like Lancaster County, where it makes up a big part of the local economy?

To take one example, popular attraction Amish Experience is closed until March 23, and in the meantime is taking “enhanced cleaning steps” in the attraction. Meanwhile, the Amish Farm and House is “temporarily closed” until April 1st. Sight and Sound Theater plans to reopen March 31st. On the other hand, this buggy ride business has no notice of closure.

What about restaurants? Lancaster County mass eatery Shady Maple Smorgasbord closed yesterday “for safety” and they “look forward to reopening in the near future.” Good ‘N Plenty says is shut down until March 30th, while on the other hand Dienner’s currently has no closure notice on the front page of its site.

It turns out Pennsylvania initially did a partial restaurant shutdown (leaving out Lancaster County, but including neighboring Chester County). Now, that two-week shutdown has gone statewide, so businesses like Dienner’s with no notice simply haven’t updated their websites yet.

However, takeout service can continue, so maybe some places are operating on that basis (Update: Katie’s Kitchen in Strasburg is one restaurant doing just that – hat tip Ed). 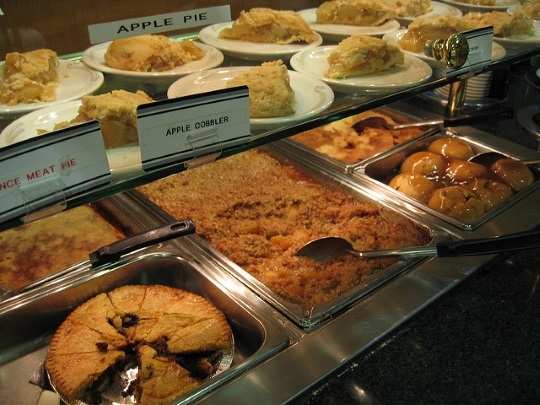 Going by this survey of major tourist businesses in the county, the closures suggest that many entertainment and food destinations are going to be shut down over the coronavirus situation for at least a week or two.

But you have to wonder if the shut-down period for these Amish tourism-related businesses will be extended.

That’s the big question mark – as it is for business in general. In the end, things could end up being shut down for much longer.

As for mud sales, the Gordonville sale apparently happened this past weekend with “added safety precautions to help prevent the spread of coronavirus.”

The Penryn sale, slated for this Friday and Saturday, has been canceled. York County’s Airville sale, and the West Earl sale, both originally scheduled to take place this weekend as well, have been postponed.

This was a big weekend for mud sales that just got wiped out.

The Farmersville sale slated for March 27 appears to still be on, at least for now. Update: The April 4 Robert Fulton sale has been canceled.

Looks like some fire companies will have to make plans to either reschedule, or find alternate sources of funding for this year at least.

To date, only three mud sales out of 23 scheduled events have taken place.

In Holmes County, COVID-19-related closures are a bit harder to find. Places like Sol’s in Berlin, Schrock’s Heritage Village and Lehman’s don’t currently have any notice of closure on their websites. That might be because they are not primarily food outlets.

The Farm at Walnut Creek and Yoder’s Amish Home both are closed this month anyway for the off-season. Mt. Hope Auction notes the postponement of a March 26-28 Bird and Animal Sale, but no reference to the situation is given so it’s hard to tell what the cause of that one is.

The Amish Country Theater does have a link well down the main page to rescheduled show dates. The Amish and Mennonite Heritage Center will be closed through the end of March.

As for eating in public, the Ohio governor shut down restaurants two days ago, and you can see notice of this on sites like those of Mrs. Yoder’s Kitchen and the Amish Door.

Finally, what about individual Amish-run businesses? Markets, stands, shops…are they open? That would again probably depend to some degree on the community and type of business, but I would guess that they are generally on a more “open” schedule – at least for now.

In many cases I wouldn’t see them shutting down until compelled to do so – either by the government, or after feeling the impact directly, meaning significant illness in their own communities.

Again, context matters. A tourist-oriented market stand selling food in a major population area is one thing, while a buggy shop patronized by 99% Amish in an off-the-beaten path community would be another.

So if you’re not hunkering down at home (which might be a good idea for awhile at least…), and planning to go to an Amish shop or store, but not sure who is open, I’d use my judgment based on that dynamic.

Of course, this situation is very fluid and more changes are likely to come (Update: Ed alerts me with news that the PA governor is “strongly recommending the closing of all nonessential stores in the state“…which regarding the above discussion, is still just a recommendation and not a requirement – but I’d think at least some Amish places will follow the recommendation).

I expect we’ll get some further reports on the Amish and this virus and its effects in the coming days.