A Roundup of News on the Amish & COVID-19

Some news from different states on how the coronavirus situation is affecting the Amish.

Earlier in the week we learned how church was continuing while school had been called off by the Amish in Lancaster County. There had been speculation that church would be halted in Holmes County, Ohio. An Amish friend in that community shared with me the following several days ago:

“With Sunday fast approaching, there has been discussion about how to handle church services, with some feeling they should be called off while others feel it’s ridiculous to do so. If our district does have church, I think we will skip it.” 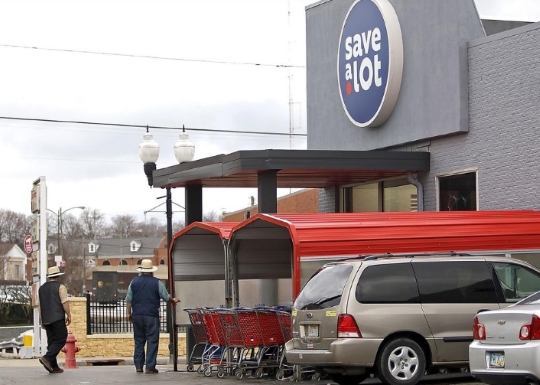 Now Rich Stevick passes on word that church has in fact been suspended:

Perhaps you and some of the Amish America community know this news already, but until late this morning, I thought I would likely never see or hear of such a thing: The majority of the Amish in our Holmes County area of Ohio have suspended Sunday services for tomorrow!

This means that church is cancelled for the half of the Old Order districts who were to meet for worship tomorrow, (22 March 2020) and it also means suspension for either church or Sunday School for the several New Order groups who meet every Sunday. My OOA friend says the suspension of worship will last “till further notice.” Marvin, our NOA friend whom you met on your last visit here, says for them it will last for at least the next couple weeks, after which “It is to be determined.”

My understanding is that in our area of Ohio, local or regional health officials pressured the local Amish to postpone Sunday meetings immediately and that local steering committee members and senior bishops subsequently decided to comply with the officials’ pronouncements. I am guessing that the Ohio governor’s mandate also played a part.

It still remain to be seen, however, whether our two most conservation Amish affiliations, the Swartzentrubers and the Dan Church (Andy Weaver gmee) will comply.

Meanwhile, many things have changed in “mainstream” Amish life since I began my studying and writing here and in Lancaster County in the early 1990s. I feel certain that in the past, most Amish bishops and churches would have been resistant to complying with any governmental agency that tried to shut them down, even temporarily. As you can see, Erik, my reporting is incomplete and subject to additions and corrections.

The Columbus Dispatch reports that Amish in the state are “taking coronavirus seriously“. The writer gives some credit to the closer connections built between Amish and health officials following the 2014 measles outbreak in the Holmes County community.

The article also describes communication efforts with the community in Ashland and Knox Counties:

“As far as what [the Amish are] doing, I don’t know,” Ashland County Health Department public health emergency coordinator Jill Hartson said. “I know what we’ve communicated with them. Typically, once we get that information to a couple key individuals they are very good about making sure they spread that information to the rest of the community.”

The health agency sent information on the symptoms of COVID-19 and orders from Gov. Mike DeWine to close schools and end gatherings of more than 50 individuals. The materials also included information on how the Amish can protect their English neighbors from potential virus spread when they borrow their neighbors’ phones, a common practice.

Chad Kaufman, a physician assistant who runs a clinic in Shiloh for the Amish and Mennonites, including many Ashland residents, said the local Plain community is taking coronavirus seriously but few are overly nervous.

“As a whole, the culture isn’t very fearful of illness and death,” Kaufman said. “They feel if it happens, it happens and it’s God’s will … A few are panicky but that’s the minority.”

In Knox County, Holmes County’s neighbor to the southwest, Amish residents also have gotten the word about COVID-19, said Mike Shaheen, a pharmacist at Conway’s Danville Pharmacy. The pharmacy opened last year as part of a full-service clinic that is a partnership with the Knox County Health Department.

“They’re very aware of it,” Shaheen said. “They know exactly what’s going on.”

In fact, he said, the pharmacy’s Amish customers are little different from their English neighbors: They’re asking the same questions. They’re stocking up on prescriptions. And they want to know why they can’t get hand sanitizer or thermometers.

“We can’t get those things from our wholesalers, but I’m not seeing a panic,” Shaheen said.

There are also business worries as much of society ceases functioning. Holmes County Health Commissioner Michael Derr “said Amish residents also have the same economic concerns as everybody else: Their buffets are shut down, tourism has dried up, the auction barns are closed and employers want to know how they can operate in compliance with state health orders and, if not, how to provide paid leave.”

Meanwhile, a large moving and horse sale in Wayne County expected to draw attendees from around the country was advised to shut down.

Rich Stevick adds the following about church in Pennsylvania:

An Amish friend from Perry County, PA, bordering Cumberland Counties and others, tells me now that all of the Lancaster County related groups have also suspended church services.

Lancaster County has many sister settlements in both Pennsylvania and in other states.

I also caught a small side detail in one story on runs on grocery stores in western PA worth sharing:

“I heard one of the Amish people ask someone, ‘What’s wrong with all the English people right now?’” shared Luke Proudfoot, owner of Fast Gas and its component convenience store in New Wilmington.

When considering the runs on stores that have left untold grocery shelves bare, Proudfoot sometimes wonders the same thing.

If I’m not mistaken “Proudfoot” is an English translation, or close to it, of “Stoltzfus.” Maybe this store owner has Amish ancestry, and a name change happened at some point.

I have been informed that Amish in Allen County have also canceled church, and are doing a “Fasting Day.”

Next, Jodi Click shares the photo below from Berne, the town in the center of the Adams County Amish community. Jodi writes: “Berne, Indiana in response to the pandemic and restaurants only doing drive-thru service now.” 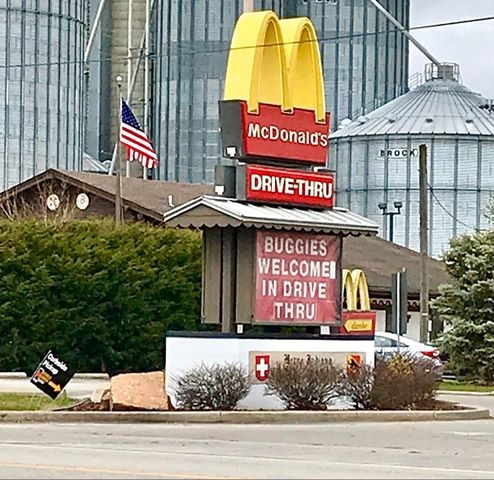 Unlike in Lancaster County, Amish schools were open this week in Lagrange County. Pennsylvania received stronger instructions to close from the state government than did Indiana, resulting in some school districts remaining open.

LAGRANGE — As public school students across the state remain at home as part of Indiana’s attempt to stem the tide of new coronavirus infections, most of LaGrange County’s Amish children are still attending school.

But the men responsible for overseeing local Amish education told LaGrange County Commissioner Larry Miller they are considering shutting those schools down in the face of the coronavirus pandemic that’s sweeping across the nation.

Miller said many of the Amish he’s talked about the dangers the coronavirus asked for a little more time to think about and discuss things before they make a final decision. He added that most of the men at Wednesday’s meeting are leaning toward the idea of closing the schools. Miller also said bishops and other senior members of the Amish community agreed that they would abide by any rule that is imposed by the county or the state.

“As of now,” Miller said, “all the stuff that’s come out of the governor’s office is just recommendations, it’s not mandated. The churches and the schools will make their own mind, but I think what I took out of that meeting is they will go along with county and state rules.”

Miller said those at the meeting agreed to recommend that for now Amish funerals and weddings be limited to immediate family only.

Informal neighborhood gatherings also will be curtailed. “They all agreed that’s something that just doesn’t have to happen,” Miller said.

The Indiana state government has released a document called “COVID-19 Guidance for Amish Communities.” In it are recommendations you’ve probably heard, such as “Cancel events with more than 50 individuals” and “Practice frequent, proper handwashing.”

There was also one that I hadn’t heard yet anywhere: “Avoid contact with animals. When possible, have another member of your household care for your animals and livestock while you are sick.”

Apparently there is no evidence pets can spread COVID-19, so we shouldn’t worry about that. So I don’t know the rationale there. Perhaps there is uncertainty over whether it can transfer to and from certain livestock, given that its origin is zoonotic.

In Tennessee, health authorities have held a COVID-19 informational meetings with Amish from the state’s largest community (Ethridge in Lawrence County). The meetings have been “very well-attended.”

In St. Lawrence County (Heuvelton), the Amish were discussed at a county meeting on COVID-19, with one official expressing concern over hygiene practices in the local Amish community:

Vice Chairman David W. Forsythe, R-Lisbon, asked Ms. McGuire about people using the county transit system and the Amish community, which, he said, travels frequently by bus out of the area.

Ms. McGuire said she has the contact for an Amish newspaper and is going to be reaching out to them to give them the information about social distancing.

The county contains one of the largest Swartzentruber Amish communities.

Amish Kitchen columnist Lovina Eicher reports that her state’s Amish schoolhouses “have all closed their doors.”

She describes shopping: “It is hard to get groceries that are needed when the shelves are emptying fast. We have plenty of meat in the freezer and canned goods, but items such as toilet and Kleenex tissues were off the shelves.”

Lovina adds that “We do want to use common sense though with this virus. I pray all of you will stay healthy and safe. God will provide if we put our full trust in Him.”

Officials in Daviess County, MO have reached out to the Amish:

While health departments across the region are going to Facebook to spread awareness on guidelines for their communities, Daviess County Health Department Administrator Cheryl Alexander said her staff has had to find alternate methods to communicate with Amish, Mennonite and Hutterite groups within the county.

Alexander said they have met with a bishop of the Amish community and provided paper resources to be passed out. She said they will continue to work with those communities that do not use social media.

This would be the Jamesport community, one of the state’s largest.

Officials have banned gatherings of 10 or more people in Reno County, which is home to the state’s two oldest Amish settlements, at Yoder and Hutchinson.

Finally, not to leave out Canada: Church services have been canceled in at least some Ontario communities, and replaced by a fast day.