The blog will be relatively quiet for the next few days, as we are working on a few changes here.  The blog platform will be switched from Typepad to WordPress–which is a good thing, and something I’ve wanted to do for a long while.

WordPress seems to be a much more versatile platform (any WordPress users out there concur?).  But, expect Amish America to remain a simple format, similar design, with access to all old posts, etc.  I’m excited about the change and will have more details to come.

In the meantime, there are a few stories that have gotten my attention recently.

The Sarasota Amish and Mennonite auction broke all records this past weekend, quadrupling the typical take to net $400,000.  If you missed it, over the weekend I posted a bit on Amish charity auctions. 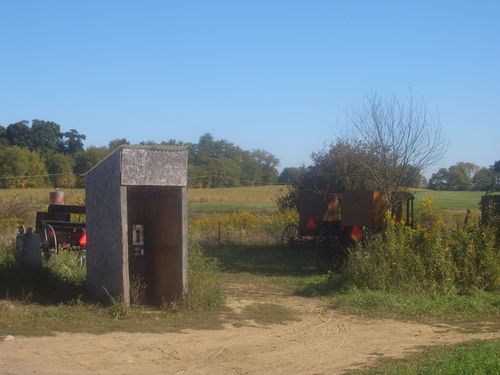 End of the line for phone booths

This interesting story (no longer online) about the decline of the phone booth in modern society got me thinking about Amish phone ‘booths’, or shanties, common in many communities as a way to have telephone access yet preserve the boundary between the world and the sanctuary of the home.

Also, Plain people in Lancaster County and elsewhere have been hit with what looks like could end up being their own version of a Bernie Madoff-esque scandal.  A Mennonite businessman in Lancaster County has apparently run an investment scheme which has left many investors in the Plain community high and dry.

While some Amish are involved, most of the 1,500 investors are apparently Wenger, or ‘Team’ (named so for their use of horse-drawn transportation) Mennonites. This Lancaster Sunday News piece (no longer online) details the very unusual course this story has taken.

The at-times very direct appeals of Sensenig to his investors (“Please do not go to the law!”) would shock most with money in the game, yet in Old Order communities, instinctive communal trust and an aversion to lawsuits prevented many from attempting to extract their investments until it was apparently too late.

On this point, I think this comment by Steve Nolt nails it:

“This is a classic example of an Old Order community relying on one another for advice and ideas,” said Dr. Steve Nolt, a history professor at Goshen College in Indiana, and author or co-author of nine books on Amish and Mennonite culture. “Here’s someone from your community who promises something good, and we know who he is, we know where he lives, we know he’s not going to take off for the Bahamas with our money.

“There’s a general level of trust,” Nolt said. “That can be a real strength. Or a real weakness.”

Strong relationships, especially as seen in Amish and other close-knit communities, can be powerful enough to create real advantages in business.  But when those bonds are exploited, a lot of people can be hurt–and when the culprit is someone deeply woven into your own community, the potential for damage is even greater.  With a possible $65 million in losses to investors, that seems to be the case here.

I asked an Amish friend for input.  He shares:  “These kind of schemes
have been around as long as I can remember.  What is different is that
a plain person is the operator of the scheme rather than the victim.”
He also mentions a few other schemes in which Amish have fallen victim,
including a well-publicized pigeon breeding operation.  Another
difference, he notes, is that “these usually don’t make any ripples in the media but this time it
has, because I think in part anyway, more plain people have been willing
to talk about it.”

The story is also remarkable for another reason:  an Amish lawsuit (or rather, suits).  Apparently two Amish investors have filed suit against Sensenig, mirroring a recent report of something similar possibly occurring in Ohio.

Seeing legal action as a form of violence, Amish are averse to filing lawsuits, an act which is generally seen as grounds for excommunication.  The fact that a few Amish have brought legal action could be seen as a small erosion of this pacifist principle, on a limited and localized basis.

One of the potential litigants described in the article, Leroy Fisher, was apparently a laborer who deposited his life savings with Sensenig.  Fisher’s actions apparently caused “a backlash” within his community.  Fisher ended up dropping his suit after being repaid, but two others have gone forward.

But does this mean the Amish are likely to “change policy” and start using the courts en masse to protect their interests?

Highly doubtful, but could be seen as more evidence of how closer ties to the world–stimulated at least in part by the culture-wide shift from agriculture to business–have introduced modern modes of thinking and resolving financial problems to Old Order society.

But, that doesn’t mean there definitely won’t be a slow erosion of this principle over time.  As my friend puts it, “as the Plains move from farming to business,the necessity of lawsuits are becoming more of a reality.”