Yesterday’s interview with Karen Johnson-Weiner on New York Amish examined, among other things, how diverse Amish groups have adapted to life in the state.  One of the groups Karen discusses in depth in her book is the Andy Weaver Amish.

The Andy Weaver Amish are an affiliation which came about in the 1950s in Holmes County, Ohio, over the issue of social shunning. 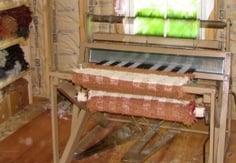 A loom in an Andy Weaver Amish home

Andy Weaver Amish occupy a place between the Old Order and Swartzentruber groups in Holmes County, where they number around 30 church districts.

They are noted for being stricter on acceptance of technology, though not so much as the highly conservative Swartzentrubers.  They also take a more strident approach to shunning.

Interestingly, Andy Weaver Amish in Ohio are in fellowship with Amish in Lancaster County, who allow a significantly greater degree of technology.

Outsiders may have trouble discerning Andy Weaver Amish from their Old Order affiliation neighbors.  Some years ago, while selling books to Amish in Holmes County, I was unaware of the difference between these two affiliations until pointed out to me by an Amishman.  Amish themselves would have less of a problem.