An Amish Forgiveness Story in Ontario

When reading of the Amish buggy accidents that seem to happen so frequently (a second Amish woman died Wednesday following last week’s accident in Ashland County, Ohio), my thoughts eventually but inevitably go to the vehicle driver.

Hard to fathom what it must be like to have someone’s soul on your conscience, even in a situation where you’re not at fault. 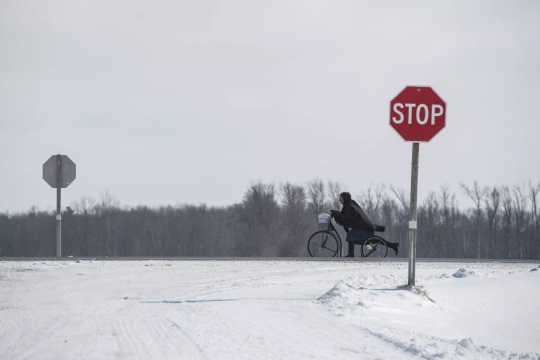 An Amish woman on a scooter near Milverton, ON. Photo: Tyler Anderson/National Post

Of course, if it turns out drugs or alcohol are involved, it’s harder to feel sorry for that person. Regardless, the burden of having taken someone’s life doing something as commonplace as driving a car – I wouldn’t wish that upon my enemies.

The Amish are well-known for practicing forgiveness of those who do them harm. This was most famously demonstrated following the 2006 Nickel Mines Amish School shooting. Amish publicly expressed forgiveness of the shooter, a local milk truck driver, within 48 hours of ten of their daughters being shot (five fatally).


Canada’s National Post shares another tale of Amish forgiveness, this time involving an 18-year-old driver who, apparently blinded by early-morning sunlight, struck a horse-drawn Amish carriage one Sunday in January. 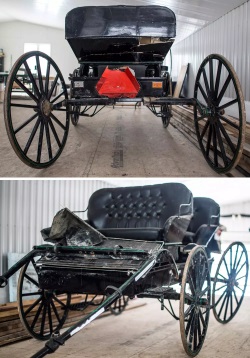 The buggy involved in the accident. Photo: Tyler Anderson/National Post

The four passengers, of the Milverton, Ontario Amish community, were ejected, with 74-year-old grandfather of 27, David Kuepfer, dying of his injuries.

Jake Edmiston at the National Post investigated the aftermath, interviewing both the driver and her family, as well as the family of the Amish victim. The result is a remarkably candid and moving story of what has happened since.

What stands out are the unequivocal statements of forgiveness and the grace extended to driver Vanessa Martin and her family. Here’s Kuepfer’s son-in-law, Paul Albrecht:

He doesn’t remember hearing Vanessa Martin’s blue Beetle coming up behind them, which seems odd because it’s a sound he’s especially attuned to. But it doesn’t much matter anymore; Paul and his family were worried about Vanessa.

The Ontario Provincial Police charged Vanessa Martin with careless driving, an offence under the Highway Traffic Act, not a criminal charge. She is to appear in provincial offences court on March 14.

“(David) would have never charged her,” Paul said. “It would have been all forgiveness with him. An accident’s an accident.”

After the funeral, Vanessa Martin’s mom brought Paul and Velma a chicken noodle casserole and some chocolate chip cookies. She knew what the couple and their family had done for her daughter, knew how their little gestures had eased a desperately hard situation.

“We know (Vanessa) didn’t try it,” Velma said. “I just know that I forgive her. It’s just there.”

Randy Wagler, a neighbor to Kuepfer who arrived on the scene shortly after the accident, expressed something similar:

Wagler didn’t talk a lot. His answers were shortest when asked about forgiveness, about the small gestures in the aftermath that made things a little easier for Vanessa Martin. It was as if to him that was the most normal part of the whole ordeal.

“It’s not something we take pride in,” he said. “I don’t think anybody thought that they weren’t going to forgive her…. It was just a mistake done by a young lady. I’m sure she wished she could go back.”

Knowing how Amish respond to tragedy, with their sense of “all in God’s time,” and “this was supposed to happen” — as Amish church members told Vanessa at the scene of the accident — this is unsurprising. But moving nonetheless.