I’m pointing this accident out as an example of a buggy road danger which I think is under-covered.

Speed and lighting get a lot of attention, but hills are another big threat to Amish buggies.

An Amishman is recovering with a broken neck in northern New York following an accident involving a hill.

By the looks of this photo of his demolished, upside-down carriage, he’s lucky to be alive: 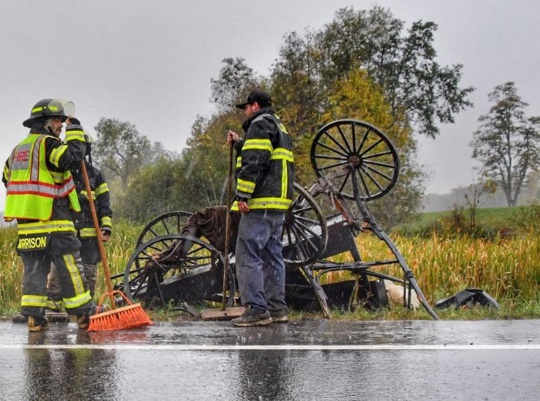 CANTON — A Lisbon man, Abe Gingreich, 39, was taken to the hospital with a broken neck after the Amish buggy he was operating was struck from behind.

Mr. Gingreich was southbound on Route 68 near the intersection with Basswodd Ridge Road at 8:48 a.m. Sept. 26, when police say he was hit by a 2014 Dodge Dart driven by Amy L. Kelso, 33, Ogdensburg. Ms. Kelso had just crested a hill when the crash occurred, police said.

The driver got a ticket for following too closely.

It sounds like what happened is that the driver crested the hill only to find the buggy on the downslope with not enough time to decelerate.

If you’re driving over one at 45-55 mph, and there’s a buggy which unbeknownst to you had just passed over the hill 20 seconds earlier, you’re going to come up on a surprise.

Probably too quickly to stop in time.

Gingerich’s injuries are said to not be life-threatening. I assume he is not going to be paralyzed due to his neck injuries either, but that is not stated.

Going by a photo of the recent accident which claimed three Amish children’s lives in Michigan, it appears that one happened near a hilltop, though that detail to my knowledge has not been revealed.