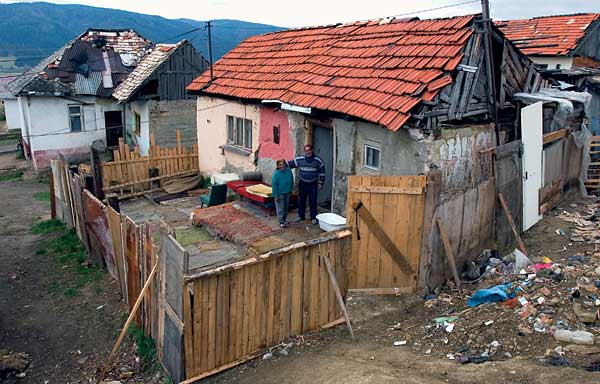 Flipping through a recent issue of the Polish news magazine ‘Polityka’, I had a chance to read an article about the Roma people, perhaps better known Stateside by the more colloquial ‘Gypsies’.  Entitled ‘Romofobia’, the piece describes the challenging situation of the 8 million-strong Roma minority living within Europe.  Poland, where I live for a good chunk of the year, has a number of Roma, though not nearly as many as nearby countries such as Slovakia, Hungary and Romania.

As I thought through the issues raised in the article, I was struck by a number of similarities between the Roma and the Amish-some superficial, others of perhaps greater substance.  And of course there are also extreme cultural differences between Roma and Amish societies.  I thought a brief  comparison of these two disparate, culturally distinct groups may be of interest.

In Krakow, the second largest city in Poland, members of the small Roma population, known locally as Cyganie, are easy to spot in public.  A typically unkempt appearance, shabby, often colorful clothes, and skin tone about five shades darker than the local population makes the Roma hard to miss, just as in America, the Amish and other Plain peoples are perhaps the most visually peculiar ethnic group in the entire melting pot.

To a large degree, Roma live separate from society, due to differences in language and cultural practice, just as the Amish do.  Aspects of both groups are romanticized by the majority population—the Roma, as evidenced by the popularity of Gypsy restaurants, music, and folklore throughout Europe, and the Amish, in the tourist industry and pop portrayals of the culture.

Both groups have high birth rates compared to the general populations of the countries they inhabit.  Both have something of a ‘transient’ mindset–the Amish ‘in the world but not of the world’, on the planet but briefly, on the way to an eternal kingdom–the Roma, eternally stateless yet traveling to all corners of the world, wherever pastures may seem greener at the time. 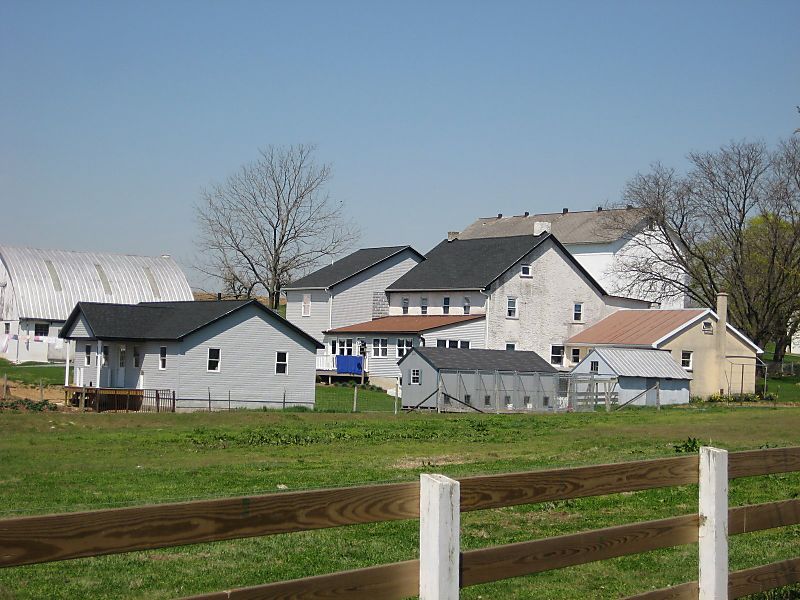 Like the Amish, the Roma are not a group one associates with placing a high emphasis on education.  Yet across the board, the Amish do tend to recognize the functional value of a solid eight grades of schooling.  Parents typically take a keen interest in their children’s scholastic upbringing, being actively involved in the selection of their teachers, and also visiting school while in session and caring for the upkeep of facilities.

Recognizing that this is likely at the core of the Roma social problems, governments and NGOs, to varying degrees have pressed for incentives and have used methods to coerce the Roma into sending their children to school.  One example is by providing housing in exchange for school attendance.

This final, somewhat dubious comparison of the Amish and Roma approaches to education was the last similarity I could come up with.  Now some differences:

In North America, the majority of the non-Amish population has a positive or at least indifferent attitude to their buggy-equipped neighbors.  It’s probably safe to say that only a small minority of North Americans show outward disdain or prejudice towards the Amish people.  With the Roma, these numbers flip.  The Roma are typically looked down upon and even despised, much of which is based in stereotypes which have, rightly or wrongly, persisted for generations. 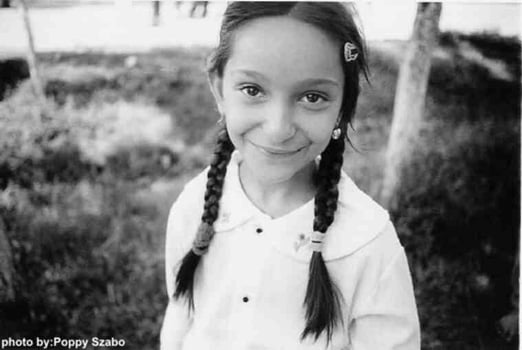 Positive and negative perceptions are based on the characteristics the public wrongly or rightly assigns to each group.  Ask an American what qualities he connects with the Amish, and you’ll often hear mentioned largely desirable concepts such as industriousness, humility, and honesty.  Conversely, associations readily attached to the Roma include thievery, violence, and sloth.  To the present day, many have undoubtedly seen the Roma as something of a social plague, one to be driven as far away as possible.

Having suffered forced sterilization, segregated schooling, and even, at the hands of Hitler’s regime, extermination, Roma have had a long history of persecution in Europe, which continues, albeit to a lesser degree, even today (come to think of it, perhaps historical European persecution is another similarity between the Roma and Anabaptists I’ve overlooked).  The most glaring example is recent measures in Italy sanctioned by prime minister Berlusconi’s government, calling for ‘express deportations’, dismantling Roma settlements, fingerprinting and requisite identity cards identifying ethnicity.

Poland has just in the past week decided to liquidate its segregated schooling for Roma children, which it will gradually phase out over the next two years.  The Polish government has also decided to examine its policy of sending masses of Roma children to schools for slow learners, often only on the basis of the youngsters having a weak command of the native language.  Segregatory policies such as these are not only found in Poland.

The impact of formative time spent outside the classroom also cannot be overlooked.  While you often find the typical Amish youngster helping out around the house, barn, or shop, sadly it’s not unusual to find his Roma counterpart learning the begging trade with his mother on the street.  Unemployment runs rife in Roma society.  Roma can be found asking for handouts on European street corners, sometimes quite aggressively.  It’s not unusual in Krakow to see Roma board city trams, equipped with a creaky violin or accordion.  On concluding their (often quite well-rendered) song, they proceed to pass the cup around. 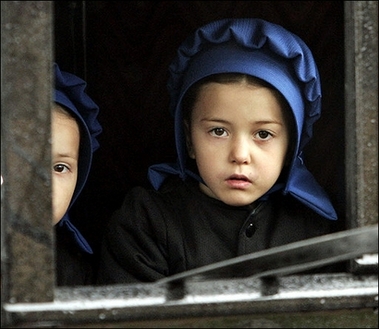 The Amish, while not fully assimilating, have adopted certain customs and have successfully integrated in the majority culture, producing a net contribution to American society.  While according to a Polish informant who works with the Roma, some do assimilate over time, the typical Roma frustrate outsiders in sometimes seeming to not even be interested in the idea, thumbing their collective nose at the dominant culture.  Discriminatory, often institutionalized policies towards the Roma certainly do not help to combat this attitude, however.

Roma in regards to self-sufficiency can seem the complete opposite of the Amish, and have a reputation for taking advantage of governmental support, exploiting benefit loopholes when possible.  Roma women have been known to have many children, which some claim is motivated in part by childbirth subsidies.  Due to this, when countries with Roma populations entered the EU in 2004 and 2007, some nations with little or no experience with Roma found themselves attractive destinations, often to their dismay, as one of the provisions of EU membership is freedom of movement.

It may seem I’ve painted with a big brush here.  Within the Roma diaspora there is a significant degree of diversity on issues ranging from social mobility to dialectical differences, just as there is among the Amish.  In certain countries, Roma have been able to assimilate and become contributing members of society, notably in England and other Western European nations, where Roma are found in politics, all the way up to the European parliament level.  ‘Polityka’ points out that for Roma in countries of the former Yugoslavia, which have constructed an education and information system in the Roma language, relations are better than in those that haven’t, such as Slovakia or Romania.

At the same time, statistics tend to back the general claims up.  As one would expect, the Amish generally have very low levels of unemployment, crime, drug use, and other negative social indicators.  According to UNICEF data from 2005, the vast majority of Roma in Bulgaria, Romania, and Hungary, three countries among those having the highest Roma populations, live below the poverty line.   Crime stats reveal disproportionate numbers of Roma in prisons, with for example 25% of female prisoners in Spain’s jails being Roma, while Roma in Spain comprise, at most, 4% of the general population.

The Amish and the Roma are among the most outwardly recognizable and most socially separate cultural groups of note on their respective continents.  Despite this, the cultures themselves, and each group’s relations with the dominant society, are worlds apart.

The ‘Romofobia’ article cites a Polish Roma expert who describes the Roma situation as an ‘enormous political, social, and economic challenge’.  Demonizing the Roma has been the easy, and often politically expedient, thing to do.  Manifestations such as a recent vigorous protest in Nowy Sacz (a southern Polish city with a high Roma population) against a proposed housing development for the Roma and other low-income groups, show that the Cyganie are far from being accepted by the typical European man-on-the-street, despite some recent institutional policy change towards the group.  Travelling Roma get nothing near the welcome that migrating Amish often do by non-Amish recognizing the economic and cultural benefits of having the peculiar outsiders in their midst.

Is the Roma problem one that can be improved upon?  Much will likely depend on the political will of local leaders and efforts of national and international groups that work to improve the Roma lot.  Cultures may not be able to be changed through-and-through (nor is that by any means necessary desirable), but they can be influenced and encouraged to compromise for their own good and that of the society which hosts them.  Thoughtful, well-executed policy, with strong incentives for education would be a good start.