Nice follow-up story to the news that the Unity, Maine Community Market burned down last week. From Bangor Daily News:

UNITY, Maine — Immediately after a fast-moving fire destroyed the Amish Community Market and Bakery in Unity last week, Caleb Stoll felt overwhelmed as he looked at the still-smoldering ruins of the business he had built from the ground up.

But the outpouring of support he and the community are receiving from around the state has buoyed his spirits at a tough time.

“People are being very, very helpful,” Stoll said Wednesday. “It wouldn’t sound right to say that I am surprised, but I wouldn’t have expected this kind of response. We’re getting letters and calls and offers of help.”

The fire was discovered last Thursday afternoon by a woman working in the store’s bakery. She ran out to get help, but within minutes there were “flames all over,” Stoll said. Although the fire marshal has not pinpointed the fire’s cause, Stoll believes it started in the chimney or stove.

“I think the initial sight of the store in flames was pretty overwhelming,” he said. “Where it felt almost hopeless was the next morning, coming down and seeing the ruins, which were still smoking.”

But a crew of about 20 Amish community members and neighbors helped clear the rubble away. They were done with the bulk of the work Friday night, just a day after the fire. That day, a neighbor with an excavator helped clear away the heavy steel, while others grabbed shovels and wheelbarrows to remove the rest of the charred remains.

Stoll plans to rebuild with a hope of opening by early summer. Besides the expected Amish community aid, help has poured in from non-Amish Mainers:

What he didn’t count on was the help of other Mainers who appreciate the store and want to support him in his rebuilding efforts. Stoll said he’s received donations as small as $10 and as large as $1,000, as well as many offers to help rebuild.

“Just the fact that people took the time to think of us [is meaningful],” Stoll said.

Stoll is working on getting a temporary store location in a former produce building, to at least operate on a limited scale providing bulk food and feed.

Walter Boomsma shares two updates from Facebook. In the first you can see where the market once was and cleanup in progress: 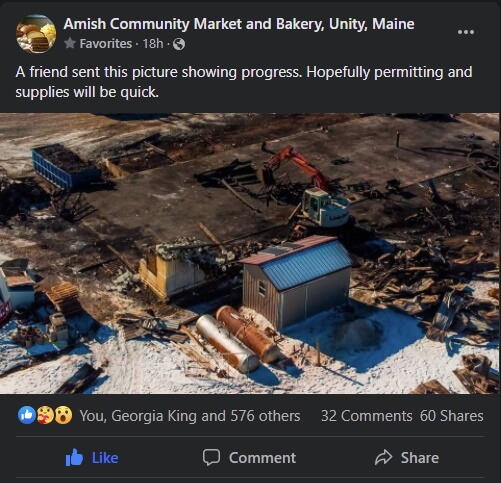 The second describes prep for rebuilding: 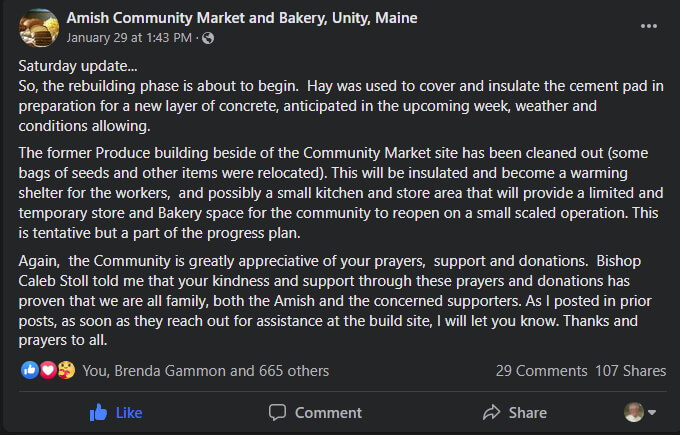 If you’d like to contribute, here’s the info via Bangor Daily News:

Stoll told the paper that “I don’t have a way to adequately thank the people who have responded.”