Today a grab bag of eight Amish news stories from the past days and weeks. Let’s dive right in.

1. Amish Basketball Fans (Topeka, Indiana) – Do Amish follow sports? Some do, particularly youth in some places. Last month I was working on my laptop in a local gas station in Lancaster County, when several Amish teens came in to charge a battery…and as you can see here, catch a bit of the Bears-Giants game: 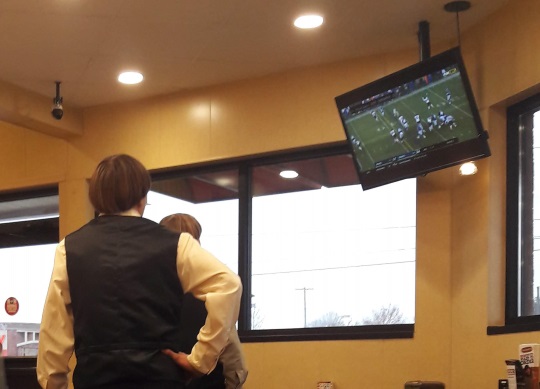 A couple of girls were watching with the guys as well.

In the Hoosier State, basketball rules. And in northern Indiana, it gets more than a little support from local Amish. This is from an Indianapolis Star article about local high school team the Westview Warriors:

“A lot of people around here have Amish backgrounds,” said Elijah Hales, a senior basketball standout. “Amish families have a really strong community and tend to stay around here. You definitely have to get used to avoiding the buggies and avoiding the (horse) poop. You have to be on watch the whole time.”

There is a crossover from Amish to basketball, both directly and indirectly. At a home game, teenage and young adult Amish from Topeka and Shipshewana tie their horses to a fence outside the school and make up a large – and distinct – fan section at Westview games.

“The Amish are some of our best fans,” Hales said. “The whole side up above (the reserved section) is all Amish.”

Rensberger, who moved to the Westview district from Wawasee in sixth grade, said he had a curiosity about the Amish when he came to the school. He said the support from the Amish “is awesome.”

“They pack the stands like it’s nothing,” Rensberger said. “They don’t have electricity or anything so I don’t blame them for coming out to watch a basketball game. The Amish are hard workers and nice, polite people. To have them all rooting for you is really cool. We love to see them here.”

When arriving into town to run errands, Amish residents had been tying their horse and buggies to a tree near the road.

“It was literally out of the goodness of his heart,” Hallock said.

The farmers selected a location near the tree line adjacent to the bank’s parking lot where the horses would be in the shade.

The new site has been popular with the farmers and community alike, as indicated by a recent Facebook post.

This is not unusual to have pop up when you have Amish come into a new area. Hitching posts in front of your store make it that much easier for you to add new Amish customers. 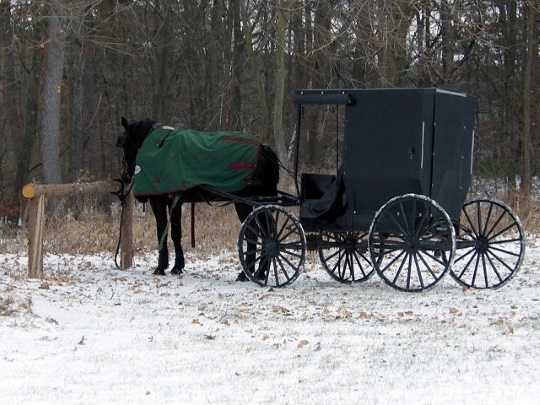 Sounds like this was a nice gesture, and as a bonus, also not a bad bit of PR.

3. Dairy Farmers Find New Milk Buyers (Wisconsin)  – Remember the story about Amish dairy farmers dropped by their buyer?  The good news is that those farmers have found a new milk buyer willing to take their Grade B milk.

Grade B milk is limited to making cheese and a couple of other products, while Grade A can be used for drinking milk. Some Amish from plainer communities provide Grade B milk so need to be able to have a suitable outlet for their product.

4. Oaklawn Helps Amish Mental Health Patients (Goshen, Indiana) – This center founded by Mennonites in 1963 has long welcomed Amish patients. Some employees are of an Amish background and can communicate in Pennsylvania Dutch, making the process more comfortable.

Glen Miller, the center’s “Amish advocate”, say stigma over mental illness has declined among the Amish, which can only be a good thing. “We try to provide treatment that is culturally sensitive that does not go against their biblical worldview,” says center employee Dale Raber.

5. Amish Bouncing Back After Business Fire (Centre County, Pennsylvania) – Seems like a lot of fires striking the Amish lately (this is the 4th I can count dating back to the Thanksgiving Eve blaze in Geauga County).

Thankfully in this case there was no loss of life. The video report below explains how Amish are bouncing back quickly and plan to rebuild following a fire at Diamond Custom Kitchens:

6. Amish Face Code Violations (Shelby County, Ohio) – Amish in western Ohio face civil suits regarding violations over plumbing, human waste disposal, building permits, and more. This recalls similar feuds such as the one in Hardin County, Ohio which was eventually resolved, or the ongoing case in Minnesota.

7. Amishman Fined $28,000 For Poaching (Coshocton County, Ohio)  – An Amish hunter landed in hot water for shooting a second buck after already bagging his allotted limit of one in early November. The man first shot an 8-point buck and then later the same day shot a 26-point buck. He knew what he was doing was wrong, as there was some further deception involved. For the violation he was assessed a fee of about $28,000 and had his hunting license suspended for one year.

I guess antlers of that magnificent size were too tempting to resist. Not to excuse the illegal behavior in any way, but file this under “Amish are human too.” This account by a local gives further detail on the story of this deer, which was known to local hunters as “Hay Rake.”

8. Toasty Oven Bakery (St. Anna, Wisconsin) – The Mast family of Calumet County, WI opened a bakery about 6 months ago. This replaces a bakery which previously existed for about a decade in the community, but which closed two years back.

The bakery sees more non-Amish than Amish customers, who come for doughnuts, cinnamon sticky buns, and the bakery’s most popular item, turnovers (pictured below, though these look like what I would call fry pies): 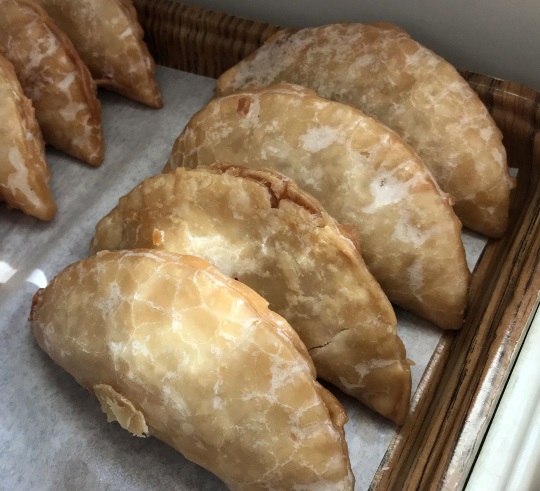