I’m in Lancaster County this week, catching up on all the pie I’ve missed eating, and doing other important thing like that…but I will be popping in here periodically. And we have some posts lined up for you.

And on Thursday we’ll be hearing from Karen Johnson-Weiner, about a special type of home found in Swartzentruber Amish communities.

But first, Jim Cates returns today with part 2 of his look at Amish women and gender roles. Part 1 is here if you missed it.

It’s No Use Going Back to Yesterday

In her confusion, Alice says to the Mock Turtle, “But it’s no use going back to yesterday, for I was a different person then” (Alice in Wonderland by Lewis Carroll, 1865). Despite the effort to hold the Amish at a nostalgic arm’s length and perceive them as a cultural backwater, we are faced with the truth. They too are different than yesterday. Even the manner in which they hold traditional values, such as gender roles, has changed subtly across time, although certain factors remain stable.

For example, American families, both Amish and English, are shrinking. The average U.S. household has less than three people, the diminishing numbers in part due to aging baby boomers. While Amish families may also be shrinking, they continue to average five to six children per family, as opposed to an overall American average of two children per household.

That difference is a significant consideration in the pattern of parental employment. A large family requires a caretaking parent in the home in a way that a smaller family does not. The Amish mother’s role is crucial for a more extended period of time than is true in smaller English families. Amish mothers more frequently care for newborns and infants, and are caring for children for a longer duration as they mature from oldest to youngest. 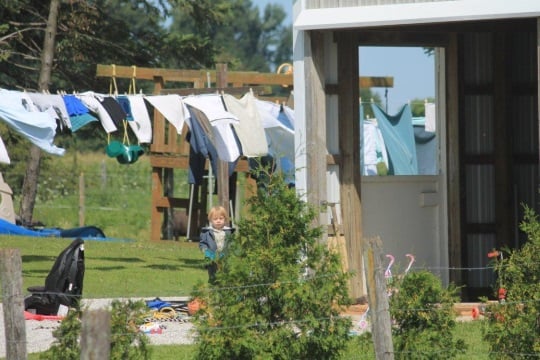 Consider also the emphasis on agriculture and animal husbandry. Even as available land dwindles, Amish families maintain farmettes, or smaller plots of land on which they can garden and provide pasture for the horses necessary for buggies and farm equipment. The demands of caring for these animals and tending crops is assisted by the children as they grow older, but a parent is still needed to provide overall supervision. Again, the role of a mother is crucial in the home in a way that is unnecessary for city-dwelling or suburban families.

Ironically, the Amish family still faces a fragmentation that was not true in the past. As fathers and older brothers work in factories or construction, they remove themselves for long periods of the day from the family environment. In the past, when farming was still a viable option to sustain an income rather than supplement it, males were a more pervasive presence in the home. Mothers now loom larger as the parental figure there, as roles are parsed and the traditional effort to work the “family farm” diminishes.

The parallels with the experience of the larger culture in the United States are clear. While there has been no crisis such as World War II to catapult women into men’s roles, they assume greater responsibility for parenting and the home, a component to the restlessness and dissatisfaction that spurred feminism in the latter half of the 20th century.

The concern some feminists express for a woman in this role is the lack of acknowledgement for the work she performs. There is no financial remuneration. Instead, she is dependent on the income generated by her husband, although in some cases she supplements these funds with a side business. And there is always the risk that others will lack appreciation for her work. 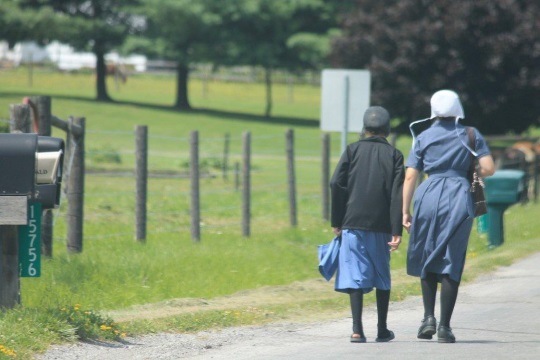 The distinction that can be overlooked is the role of a homemaker in a collective versus an individual culture. Situation comedies often use the foibles of family life as fodder for plots. Frequently, the story line focuses on the difficulties when two or more families attempt to coordinate an activity or run headlong into trouble as they manipulate around each other. These comedies highlight the independence in our lives.

By contrast, the Amish as a collective society rely heavily on family and neighbors. Homemakers are less isolated, intertwined with their siblings, adult children, and friends in all that they do. This involvement gives a camaraderie and cohesion to tasks that is lacking when these same efforts are pursued independently.

We in mainstream culture also bump our heads on the awareness that women are trapped by the “glass ceiling,” and that they continue to be unequally paid for completing the same work as men. We measure equality in dollars and cents. Coin of the realm is a simple and concrete way to analyze the success of our egalitarian efforts. However, in a culture that encourages humility over the ostentatious display of wealth, it fails to faithfully capture the elements of equality in gender roles.

The Amish do not view work as we do. They may see themselves as craftsmen, as artisans, or as highly skilled in the performance of their jobs. However, they do not aspire to “success” in a worldly sense of reputation and fame as an individual. (I think of one man who built carriages that were used, among other places, in a presidential inauguration and a Miss America pageant. I learned of his skill by sheer accident.) 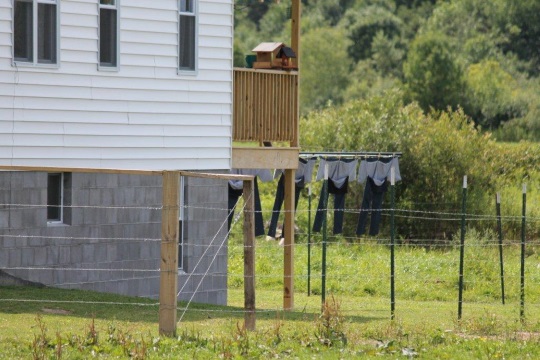 Their accomplishment speaks to their ability as a gift from God. As such, if they are able to make money, that may be a source of material comfort, but it is not expected to be a source of pride. In this context then, the woman whose role is that of wife and mother, but who receives no financial remuneration for her work, is not diminished because her efforts are unpaid. Rather, she is serving in a role of importance, just as her husband does.

The nature and purpose of gender roles is much more complex than it appears at first glance. Although similar to our experience, in that they are intertwined with economic as well as cultural expectations, all too often we view Amish roles through our own perceptions. Instead we must consider the context in which theirs occur. However, the fact that gender expectations are culturally based does not mean that all aspects meet with equal emotional acceptance. The submission of women is based on Biblical principles as the Amish see them, and is the subject of the next post.

Jim Cates is author of Serving the Amish: A Cultural Guide for Professionals. He can be contacted through this blog or his website at servingtheamish.net.