Tragic happening in York County, PA (the area across the Susquehanna which is considered part of the Lancaster County settlement). The York Daily Record gives an account of the accident, which happened Friday morning, and the community’s response thus far:

Friday morning, Amos Stoltzfus dropped off some of his wife’s fresh-cut flowers at the Country View Market on Route 74, not far from their home in Brogue.

His wife, Katie Ann, has a large flower garden at their farm, selling them at an honor stand at the end of their driveway and supplying some local florists with sunflowers, zinnias, hydrangeas, gladiolas and black-eyed Susans. One local florist who sells Katie’s wares said she had a magic touch when it came to growing flowers. They were always beautiful, she said.

As he dropped off the flowers, setting the bouquets in a wooden display case at the front of the market, he chatted with the proprietor of the Amish-owned market, saying he and his family were planning an outing that afternoon, heading to Otter Creek for a picnic and some fishing.

Amos steered the tractor down the hill, navigating the curves on Furnace Road as they descended to the creek. Something happened at one curve, a hard right. The tractor and trailer went off the road to the left, striking a tree and tumbling down a steep 30-foot-or-so embankment.

Katie, 36, and two of their daughters, 14-year-old Mary Etta and 7-year-old Naomi Rose, were killed, as was one of Amos’ nephews, Caleb Emmanuel Fisher, 9, who was visiting from Lancaster County. Amos and the other children were injured and, according to neighbors, at least two remained in critical condition.

You see Amish families out in these tractor-trailer rides. It’s a popular form of family outing in some communities. How tragic that what was meant to be happy family excursion ended up like this. The Daily Voice offers further details:

Katie Ann Stoltzfus, 36, two of her daughters, Mary Etta, 14, and Naomi Rose, 7, all of Brogue, and Caleb Emmanuel Fisher, 9, of Lancaster, all died from blunt force trauma at the scene of the accidental farm tractor rollover crash in the 1100 block of Furnace Road near the intersection at Indian Steps Road in Lower Chanceford Township around 11:15 a.m., on Friday, July 29, according to Pennsylvania state police and the York County coroner’s office.

The four victims were pronounced deceased at 1:30 p.m. that day by Deputy coroners Carissa McLyman and Karen Frank, who were assisted by Deputy Coroner in-training Scott Pennewell.

“An older-model farm tractor was pulling a flatbed, open utility trailer,” state police say. “Twelve individuals were riding in the trailer when the operator of the tractor traveled off the roadway and over an embankment, causing the tractor and trailer to roll.”

Six others— including more children— were taken to area hospitals by ambulances and helicopters, and the man operating the farm tractor was transported from the scene in serious condition, according to an updated release by Pennsylvania state police.

Katie Anne was apparently known and well-loved in the community. The non-Amish community has responded by organizing a fundraiser, among other efforts:

“They’re just like anyone else anymore,” said Lisa Grove, who, with her husband, Cory, runs G’s Concessions from their home in New Bridgeville. “They’ll come to birthday parties and other things. They just don’t keep to the Amish community.”

“I just know, if it were reversed, they would help us,” Lisa Grove said. “They’ll help anybody who needs help. It doesn’t matter if they’re Amish or ‘English.’”

And now that the Stoltzfus family needs help – the medical bills could be, as one neighbor said, “astronomical” − the community is banding together to help. 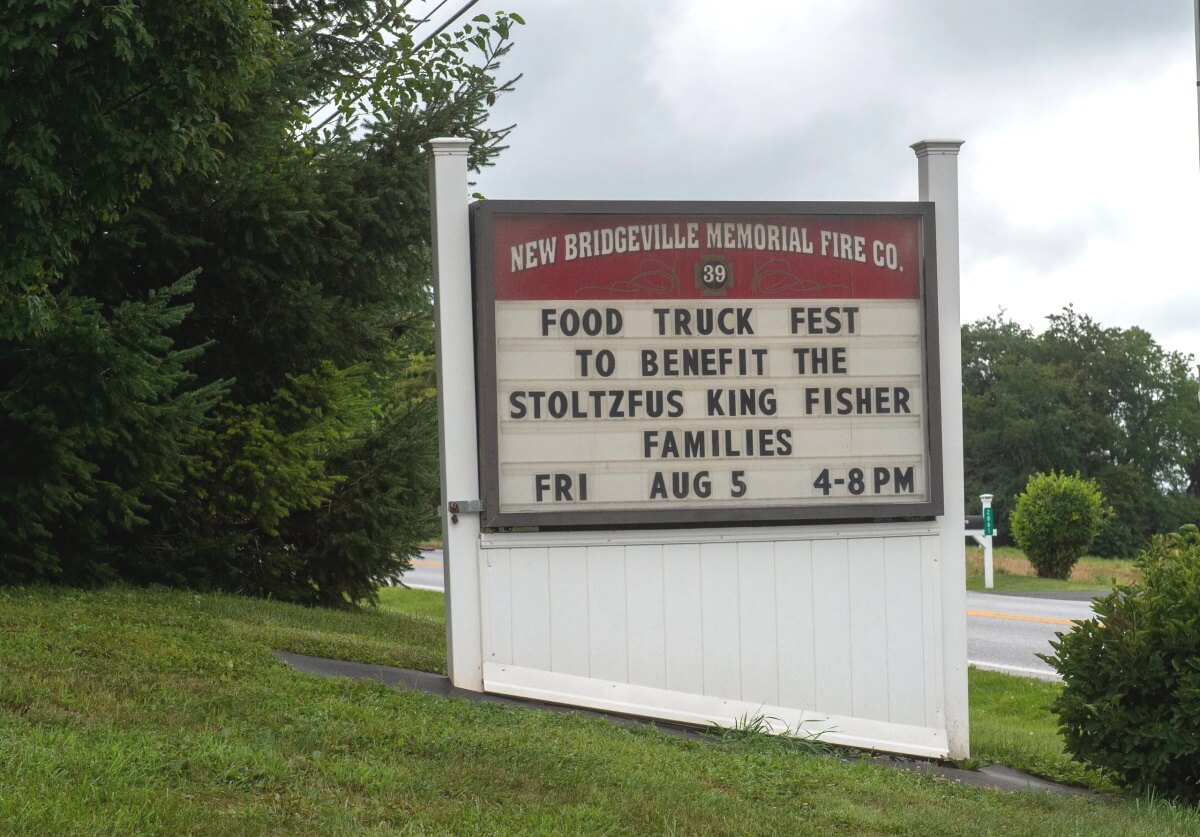 Within hours of hearing about the tragedy – the Groves heard the sirens from their home about five miles away on Friday, but only learned on Saturday morning that the accident involved people they knew – they began organizing a fundraiser.

By Saturday night, they had put together a plan, and as the weekend passed, they got commitments from at least eight other concessionaires and food trucks. They spent Monday visiting local businesses, asking for gift cards or items to be raffled off to raise money for the families involved in the tragedy.

The event is planned for 4 to 8 p.m. Friday at the New Bridgeville Fire Company. It took a brief phone call to secure the assistance of the fire company, which was the first of the first responders to arrive at the site of the accident. Lisa Grove called the chief, Ronnie Witmer, and his response was “Whatever you need, I’ll make it happen.”

Amos is described as being in “serious” condition. I can’t imagine the grief that must be upon him right now. And of course the rest of his family. If you’d like to help – I’m not seeing any online fundraisers or info on where to send assistance at present. I’ll update this with that info if and when it is provided.