We’ve looked at Amish participation in Pennsylvania fire companies before. And each year mud sales are held throughout Lancaster County to support those companies, which are known for their heavy Amish makeup.

But did you know that some Amish in New York also serve as volunteer firemen?

According to the Rochester Democrat & Chronicle, Amish are members of two fire companies in western New York, in Ovid and Interlaken. This is Seneca County, home to a four-church-district Amish community.

The Ovid community is a Lancaster-origin settlement (it technically originates from the Brush Valley community in Indiana County, PA; see The Riddle of Amish Culture p. 337).

So it’s not a surprise that Amish in this area have carried the Lancaster custom of firehouse volunteerism to their current home. According to the companies’ chiefs, it was an Amish initiative:

In past years, both fire companies have had campaigns to entice citizens to volunteer but they have not been successful, so the practice has been discontinued. Surprisingly, it was the Amish who approached each fire company about joining.

“We had an Amish man join many years ago, but after a few months, the bishop made him quit. No reason given,” Palmer said. “Then something miraculous happened a few years ago. Another came, he stayed and shortly thereafter two more signed on. Now we seem to have one wanting to join every few months.”

The Amish aren’t as heavily represented as in Lancaster, but they’re definitely in the mix:

Palmer, 70, who’s been with the Ovid company 52 years, says there are 10 Amish firefighters out of 57 active members in his department. Interlaken, a company of approximately 40 members, has one Amish firefighter. They range in age from 19 to 30. 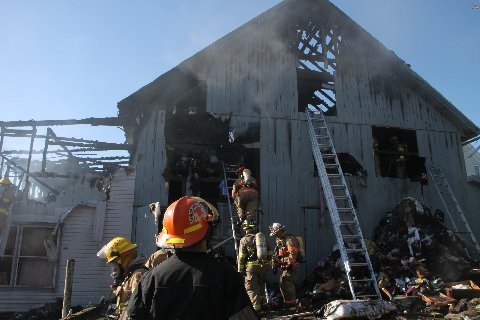 Sounds like Amish and English have worked together well:

“Nobody knows how to roll out a hose like the Amish,” Standard said. “Even at rapid speed, they are meticulous about it.”

Both Palmer and Standard are on guard to protect the relationships they have cultivated with the Amish firefighters. Members of both fire companies are careful not to infringe upon Amish beliefs.

“We’re a brotherhood at the fire house; a second family,” Standard said. “We never want to do anything that is going to offend them.”

The English (non-Amish) and the Amish have developed a community partnership through the fire companies. Recently, the Amish have participated in 9/11 memorial ceremonies and one family attended this year’s annual fire company banquet. One Amish firefighter even rode in a fire truck during the Trumansburg Fair Fireman’s Parade.

Getting the word out–and getting to the fire

How do Amish find out about the fires–and how do they get to the firehouse?

The Amish are alerted with what looks like a standard pager they carry, but which is recharged by solar energy. They are then picked up by English members of the company or transported by a Mennonite in what some of the firefighters refer to as an “Amish taxi.”

One young firefighter arrives at the firehouse by man-powered kick or push scooter. He has repeatedly tested the terrain over the course from his rural farmhouse to the village and, gaining speed over time, now makes it in six and a half minutes. To alert motorists, he wears a reflective safety vest. 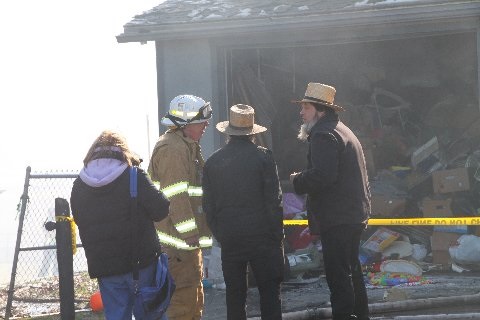 One detail which might surprise you about Amish blaze-battlers:

Only those without facial hair (the unmarried) are allowed to go into a burning structure.

“It’s a NFPA (National Fire Protection Association) regulation,” Standard said. “The air pack worn as part of the equipment doesn’t seal securely over the face when there’s facial hair. It’s for the protection of the firefighter.”

Bearded or beardless, they are appreciated.  “They’re fearless,” says the Interlaken department chief.