Do Amish respect the law?

You often hear how Amish are highly law-abiding–that is, except when it’s come to the “important issues” of conscience, like military participation, schooling, etc.

I’m not so sure though.

Warning: I’m going to generalize a bit in this post.

That said, I also detect a fairly defiant approach to government on the part of some Amish.

This can go beyond simple grumbling about regulations and fees (which you hear from just about all Amish involved in any sort of business, Amish in the construction industry in particular).  It can mean a surprising willingness to thwart the rules.

I was reminded of this reading a story today on a Michigan Amishman who refused to jump through the proper hoops when expanding his home bakery.  From the piece:

Rudy Yoder first went to the Building Department to get a permit for a building to replace the bakery. Minard said the addition was considered a commercial building under state construction code, meaning Yoder must obtain sealed drawings by an architect or engineer.

Minard said Yoder didn’t like that explanation and came back the next day, saying he was just going to put a storage addition on his house. Minard explained that if the building is used as a store, Yoder would need to obtain the proper permits or Minard would shut down the business.

Minard said Yoder went ahead and built the addition, using it for his new store, and did not contact Minard to conduct a final inspection.

Minard inspected the bakery in early September and informed Yoder he was in violation of four sections of Michigan Construction Code. Minard shut down the bakery, saying it was “illegal, dangerous and unsafe.”

Typically, Amish have taken their “big stands” against government on matters with religion at the core.  Reading this story, nowhere can I detect any sort of religious conscience argument.  I can’t find any compelling reason given outside of not wanting to comply with the extra cost and hassle.

Yoder probably has a point when he says “I would really like to trade ends with one of those guys (with a government job) making $80,000 a year. I would love for one of them to be in my shoes. Get out here and see what we’re doing and see if you can do it any better.”  But why do the rules not apply to him? 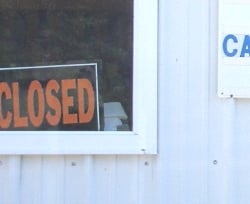 But wait, I spoke too soon.  At the end of the article Yoder does bring a higher power into the mix: “Minard and the government were against us, but God and many of his people have supported us in this situation.”

This isn’t the only instance.   In one Amish community I visited, I was able to track down an unmarked shop.  The reason the shop was unmarked was in order to stay under the radar.

Speaking with the shop owner, I learned fear of attracting local regulators’ attention was the main reason.  Apparently, things had been going fine, until, coincidentally, just the day before.   Inspectors had arrived.  Changes would have to be made.

One of the changes?  Building a secret room to be able to store and sell cheese, the owner explained.

Raw milk is another example.  The Allgyer case became a national story and rallying point for raw milk activists earlier this year.  I don’t see a clear religious conscience issue there, but maybe I’m missing something.

Hey, I don’t like all the rules and regulations either.

But rather than being bold and inspiring stands on the part of core religious and cultural beliefs, Amish thwarting the powers-that-be in these instances seem driven either by a desire to earn more money or resentment towards outside interference in personal freedoms.

Don’t get me wrong.  I think those are good things.

The Amish in these examples may be inspiring for champions of economic liberties.  But that isn’t what Amish existence is based upon, at its core.  Or where they’ve made their big stands in the past.  Those have typically been areas of religious belief.

I certainly sympathize with complaints about regulation.  I think we have too much of it.  There is a subtle tyranny that can erode freedoms over time by a thousand nicks and cuts.  Poland, for all its foibles, is less regulated (and less litigious) in many ways than the US.

But it’s interesting that there seems to be a willingness to engage in basically dishonest behavior on the part of people who profess honesty as a cardinal virtue.  Does the fact that the dishonesty is against the government make things different?

All this said, I have a lot of Amish friends and acquaintances who would criticize this kind of behavior.  You may not like the laws, but you gotta live with ’em.

But there’s one other point to consider:  on some level, these individual and economic liberties may not be that far apart from the religious and cultural ones important to Amish (and the rest of us).

Once you start yielding to your rulers in one area of freedom, do you make it easier for them to take away other freedoms?