Delaware’s lone Amish community is experiencing a whooping cough outbreak, at least the third significant occurrence in the community in the last 30 years.

This Delaware Online article reports that eighty percent of the four dozen cases are in children under the age of eleven.  The outbreak has so far been restricted to the Amish community, located west of state capital Dover. 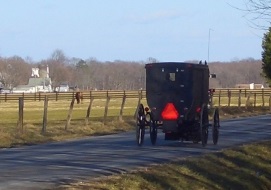 Delaware’s Amish have been through whooping cough before

Whooping cough is actually on the upswing in America as a whole.  The disease had dropped to around 1,000 cases nationwide in 1976.  In 2012, nearly 50,000 cases were reported, the highest number since the 1950s. The rise is due “in part by what doctors think is fewer children being immunized and less protection afforded by those who are.”

Whooping cough is treatable but poses a significant threat to babies (an Amish infant died during one outbreak in a New York Amish community).  From the article:

Whooping cough, also known as pertussis, evolves into a series of coughing fits that lasts for weeks. It is known for the “whooping” sound that results when patients have violent and rapid coughing until the air is gone from their lungs and they are forced to take a loud inhale.

Babies who are too young to have been vaccinated face risks of life-threatening pauses in breathing called apnea, according to the Centers for Disease Control and Prevention.

The disease spreads through coughing and sneezing while in close contact with others and generally is treated with antibiotics. Early treatment is important.

Not the first time

The Delaware Amish have had a history with whooping cough.  Nine years ago this settlement experienced a much larger outbreak of over 300 cases.  A little online searching reveals that the community also experienced a large outbreak in 1986.

When obscure (or supposedly obscure) illnesses strike Amish communities, the public naturally wonders about vaccination and medical care among the Amish.

As in previous outbreaks, the Dover community is cooperating with efforts to control the disease, with an Amish home being used for vaccinations, medicine and education.  For various reasons, Amish populations are generally less vaccinated than the general population.