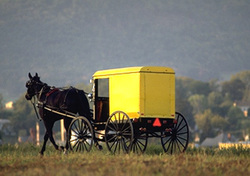 Most Amish look alike to the man on the street. In reality the group is surprisingly diverse. Though tied by a set of core beliefs, the Amish have no national governing body, no pope nor patriarch. The individual congregation, guided by its bishop, decides its own rules and customs. This decentralized approach, along with a widely varying tolerance for progressive ideas, creates many different ‘flavors’ of Amish. Within the 1200-plus congregations in North America you will find:

This is just the tip of the iceberg.  Congregations differ on beard length, lawnmowers, airplane travel, church-houses, Game Boys, and a host of other issues.  It seems the ‘plain people’, in many ways, are not so plain after all.

An online resource on the Amish and other Plain people, including Mennonites, Hutterites, and other Anabaptist groups.
©2006 Amish America
Get the Amish in your Inbox Subscribe