So if you’re not into “social media drama”, just skip this post. I don’t plan to make a habit of covering things from Facebook, but I need to address this here.

You might remember a post I did in August about Eddie Swartzentruber’s TikTok channel (“Swartzentruber Amish-Raised Man Shares The Bad Sides Of His Amish Life“). Eddie responded on Facebook, making some false claims about me. Several weeks ago I decided to post a rebuttal (detailed below).

I don’t seek this kind of drama. But it was important to me to do so, because he claimed something that goes against what I stand for – that I shut down his ability to communicate. 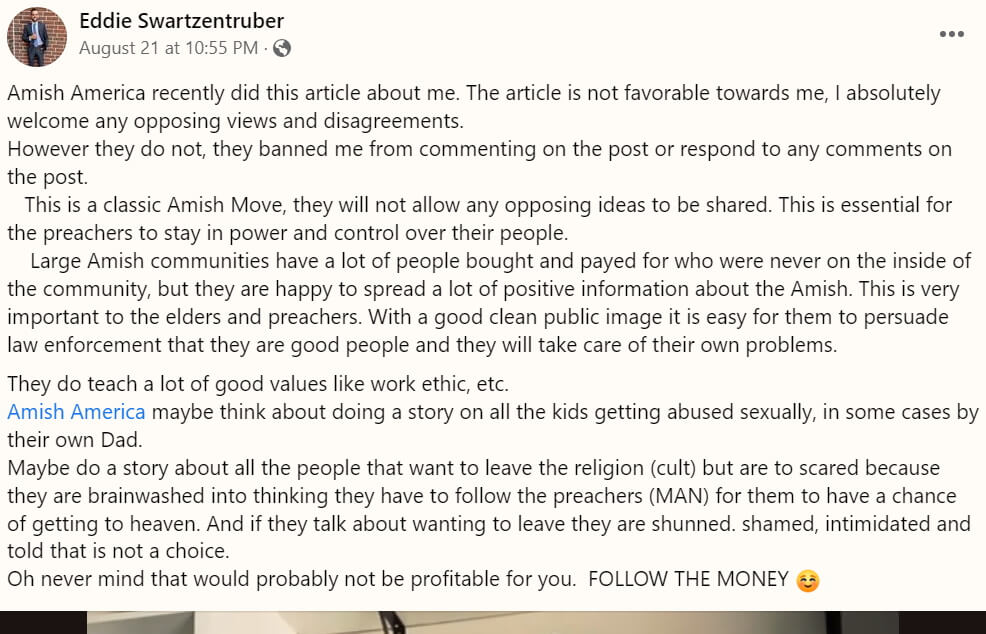 Eddie made his claims on Facebook, so here’s what I wrote in response there:

So I’d rather discuss other topics, but I have to correct the record on one thing.

The post was a mix of positive (I wrote that Eddie is likable, I enjoy his videos & found value in them) and critical (on some of the content/presentation). I thought it was reasonable and relatively mild. You can be the judge.

Eddie apparently tried to reply to me on my FB post, but for some reason couldn’t. He then did a post on his own page claiming that I banned him and blocked his comments (I didn’t). There are some other accusations that I don’t quite understand, but you can find it here.

Others saw the claims in his post, and ran with it.

I wrote Eddie several times explaining that I never banned him. I don’t know why his comments didn’t appear on my FB post. Maybe something in the content? I don’t know. I don’t run Facebook.

I also offered to Eddie that if he really couldn’t reply to my post, then I’d be glad to share his unedited comments either on my FB page, website, or both. I wrote to him several times, and didn’t get much response back.

The main thing here is I want to correct the false impression that was created by Eddie’s FB post. I didn’t ban or block Eddie in any way. Criticism of me or my ideas is fine. It’s been that way for 15+ years now that I’ve been writing about the Amish.

In fact, there are plenty of critical comments on the FB post I did on Eddie’s videos. I don’t care, I leave them up.

Either way I wish Eddie the best. The offer still stands, if he’d like to reply to what I wrote, I’ll share it as a guest post on either or both channels. Otherwise I think that covers it 👍 Erik 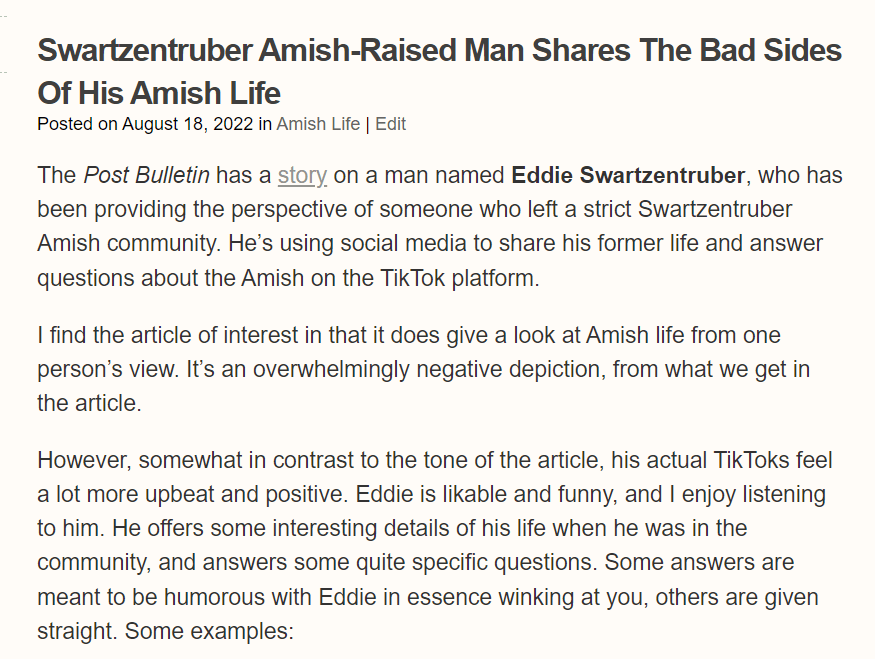 Since I posted the text above (September 7th), Eddie seems to have just ignored it. It looks like he’s not going to take up my offer to share his unedited comments. That’s his prerogative. But I’m not really surprised.

Why am I “making a deal” out of this? Only because Eddie attempted to damage my reputation publicly. And did nothing to correct it, despite my repeated outreach to him. My reputation – especially concerning allowing open discourse on my platforms – is important to me.

After some thought, I believe that this was probably Eddie’s first encounter with mild criticism on public social media. And I now suspect that his story that he couldn’t comment on my post was false (I have changed my mind on that and no longer give him the benefit of the doubt).

Why? For one, his inaction. The narrative that I “blocked” him is also easy for people to run with on Facebook. It gets instant attention. He knows a crowd will jump in to support him. It’s easier and more satisfying than actually engaging any criticisms. I guess it’s how a lot of social media works.

Eddie also made some strange conspiracy-style suggestions that I was aligned with and being paid by Amish church leaders, which is truly head-scratching. But that sort of claim would also have natural appeal to some in his audience.

I wish Eddie had simply responded to the points I brought up, without having to create a false social media drama. It could have been a worthwhile discussion, but it probably wouldn’t have gotten the same response from people. 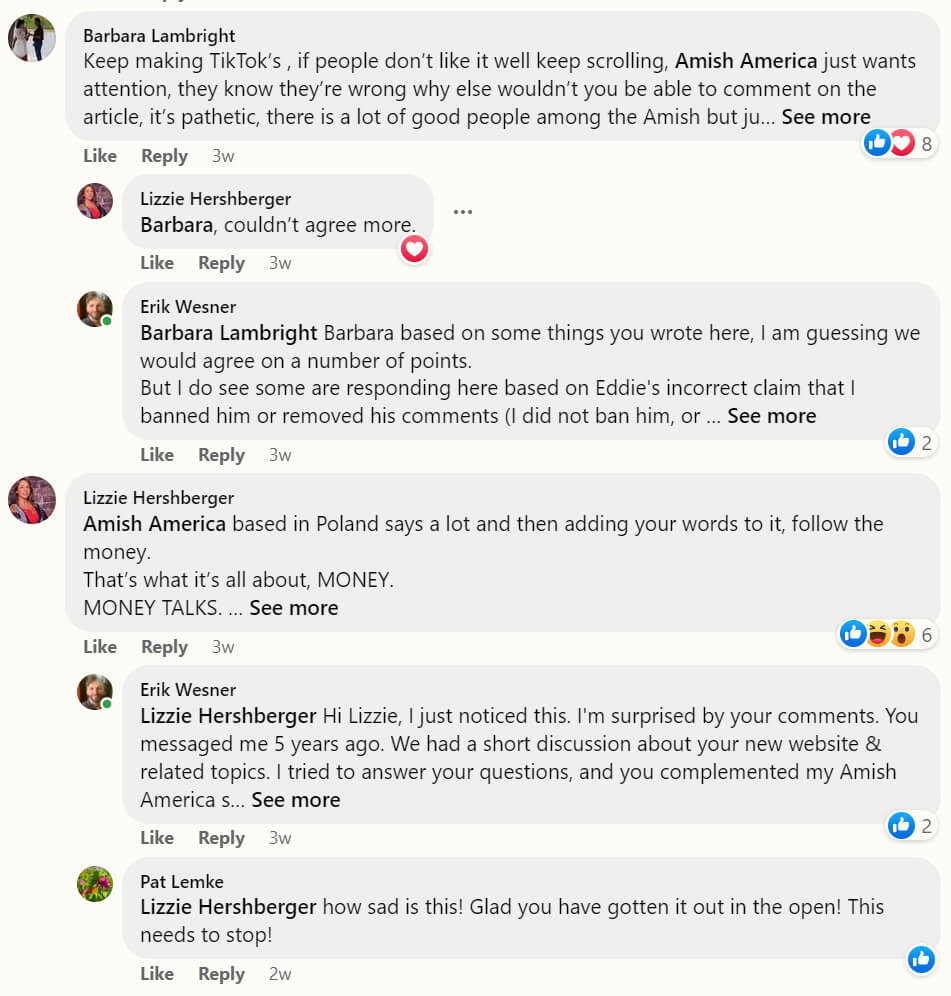 Some of the comments

One plus though: I do see in another recent article about his TikTok channel that he has now apparently been emphasizing some of my main points – that not all Amish groups are the same, and his personal experience doesn’t represent “all” 350,000 Amish people.

This point comes up in the article in the Star Tribune. For example, here’s a quote from a new video that it looks like he has made since our exchange:

Swartzentruber tries to emphasize that he isn’t speaking for all Amish, or even all ex-Amish. In one recent wry TikTok take, he shares how his family’s settlement, which is part of the ultraconservative Swartzentruber Amish, differs from those that follow more modern interpretations of the religion.

I think that’s good and would reflect what I was talking about in my original post. This may sound like me patting myself on the back, but that’s not really the point.

We could have gotten to the same place without all the additional baloney if Eddie had just been more responsible about his public claims. Eddie had many chances to clean it up, but didn’t. So I had to clean up Eddie’s mess here.

Anyway, if you made it this far, thanks for humoring me. Back to regular programming.