This is my friend Daniel Weaver. Daniel belongs to a New Order Amish church:

You might remember him from the Guardian article “Our faith will be lost if we adopt technology” (which is where this photo comes from).

Daniel just opened a market in his community of Morris (Otsego County) in upstate New York. The Daily Star of Oneonta, NY profiles the new business in a recent article.

Daniel likes to do things big, and this is a pretty big place, with over 4,000 square feet of space: 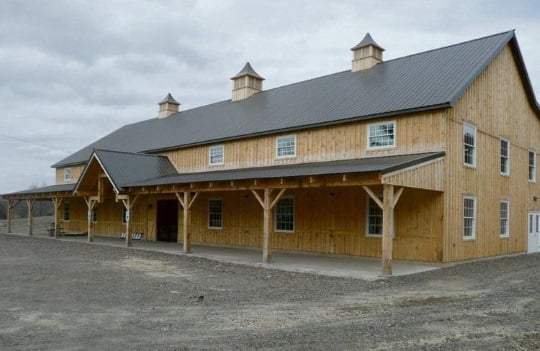 I took a couple photos last December when I visited on a rainy, chilly day. They were putting the finishing touches on the building at the time.

They had a crew up from Lancaster County that day, to install the cupolas on the roof. Looks like they’re about halfway there in this photo: 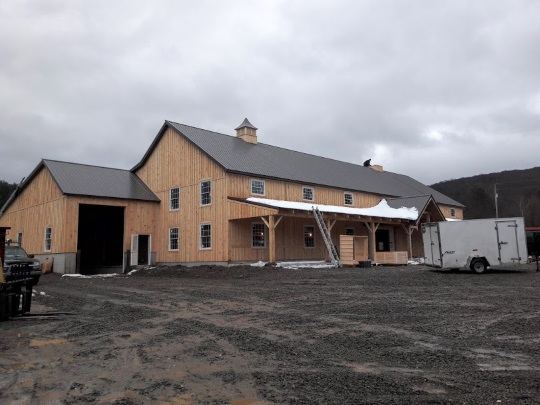 What you’ll find in the store

There are no photos yet of what is available in the store, but you can expect quite a selection, which Daniel describes in the article:

The family has run a market stand for several years, and have built up a nice customer base from that.

For a long time Daniel owned Weaver’s Apparel, a Plain clothing wholesaler, doing business in Amish, Mennonite, Hutterite, and even Orthodox Jewish communities across the country. Daniel and his business got to be pretty well-known, especially among people who run variety and clothing stores.

Daniel is from Holmes County, which is where I met him, going on 15 years ago. I knocked on his door one day when I was selling books in his community. Daniel didn’t buy from me that day, but I came away with something more valuable than another customer.

Since then I’ve had the good fortune to attend church and Sunday School in his church district, and have found a place to sleep on more than one occasion. They’ve always made me feel welcome, both the Weavers and other members of their community.

Daniel moved to Morris about four years ago with his wife Iva and their eight children including his eldest son Samuel who is married with a family of his own. It’s a much smaller community and slower pace of life than what they left behind in Holmes County.

The Weavers had a difficult year. They lost their daughter, Dorcas, at age 24 last year to cancer. The one-year anniversary just passed in April. Dorcas left behind a husband and young son.

The family appreciated support from the community at that difficult time: “Many people showed up for the calling hours. They brought food to the home or expressed their sympathy in other ways,” says Daniel.

When I visited Daniel in December, I brought along another good friend from the Lancaster Amish settlement. We had a delicious lunch of venison stew and then visited with some other families in the community, including Daniel’s father Roy.

Roy, who has a love of history, showed us some of his books (Roy was involved in producing the book Songs of the Ausbund, which includes English translations of Ausbund hymns). Later we visited the home of the bishop, where I picked up a bottle of NY maple syrup.

“Our No. 1 goal for the store is to glorify God and have good customer satisfaction,” says Daniel in the article. “It’s about appreciating our customers and taking care of them, with an emphasis on local and on quality.”

New Yorkers, or anyone passing through the area, would do well to stop in at the market and say hello to Daniel and the family. The place has been open just a few weeks. I’m sure they’ll be happy to see you.

Here’s where you’ll find the market and its hours: