The people or the building?

The Roman Catholic Church has one of the largest holdings of real estate of any organization in the world.

Over the last two millenia it has build thousands of churches around the globe, some humble, some resembling lavish storehouses of art and artefacts.

The multi-million dollar Crystal Cathedral, often called ‘the most spectacular religious edifice in the world’ was built in 1980 by the Reformed Church in America.  Today, it often shows up on ‘top-ten attractions’ lists for the Anaheim area. 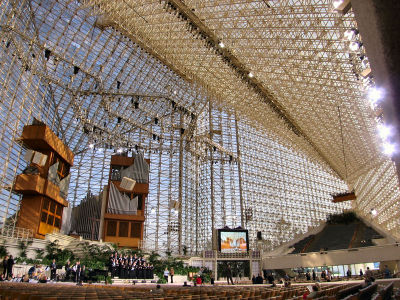 The Charismatic City Harvest Church in Singapore was modeled after Spain’s Guggenheim Museum.  It cost nearly $48 million Singaporean dollars ($27 million) to construct in 2002.

Highlights include a quarter-million dollar custom-designed Broquard fountain, a putting green, as well as unusual building materials such as European limestone and titanium.

In contrast, the 1800-some Amish congregations of North America manage to worship at what you might call a ‘deep discount’.

As a rule, the Amish do not build churchhouses.  Amish church service is held in the typically modest home of a church member.