Though we’ve done quite a few book giveaways lately, I realized I’d never given away my own.  So let’s do that!

Win a copy of Success Made Simple: An Inside Look at Why Amish Businesses Thrive

I’ve got 3 copies of Success Made Simple: An Inside Look at Why Amish Businesses Thrive to give away.  If you somehow missed all the times I’ve gone on about it on this blog, it’s my business book where 60 Amish share their ideas on running a company, including topics like marketing, management, family life, frugality, relationships, and so on.  It was published earlier this year (March). 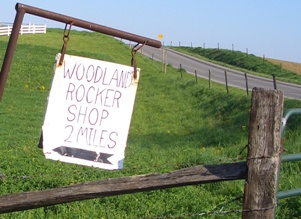 Now one thing these publishers expect you to do when they publish your book, is to promote the thing.  So that’s what I spent a good chunk of the year doing.  At times it was even pretty fun, or at least interesting.

Two memorable events were 1) a talk I gave to a whole big collection of steely-eyed Amish business people in Ohio, and 2) an interview with Irish National Radio, from this summer (I was worried I wouldn’t be able to understand the Irish language, but it was strangely similar to English).

If you’re familiar with the book contest format here, I usually do an interview along with the giveaway, where I try to think up smart questions to ask the author.  Well I’m kind of tired of thinking up questions for the time being, plus it would be a little weird to interview myself, don’t you think?  So this time you get to interview me.

Here’s how to enter the contest: just leave a question in the comments section either a) about Amish business, or b) about writing or researching the book, ie, the process of creating it.  Can be about just about anything in those 2 categories (except for questions about odd and unusual writing habits, sorry I can’t disclose any of those).  I’ll randomly draw the winner from your questions.  That is it. 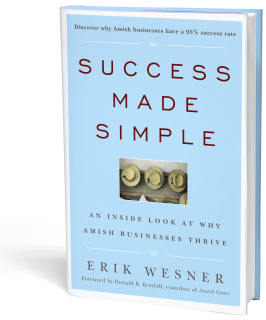 Now, this is a business book, and I realize not everyone out there runs a business.  But most people know someone who does.  So–you could also think of this as a chance to win an Xmas present for someone who might get a kick out of an Amish/business read.

We’re going to make this a quickie contest.  I’ll post the 3 winners 3 days from now–this Friday December 10th.  That way I’ll have plenty of time to mail books to the winners before the holidays.  I’ll post answers to your questions that day too (or at least the best ones!).

To get the ball rolling, I’m going to share a short bit from Success Made Simple.  This is excerpted from chapter 8, “The Big Picture”:

FAMILY TIES
An intense midsummer light streams through the windows this early Saturday morning.  Delmar Wagler, a soft-spoken father of six, has picked a modest wooden toy off the top shelf of the bookcase, and is sharing a story.
The toy is a Noah’s ark, and it used to be Galen’s favorite, Delmar explains, as he fingers the smooth-worn surface of the wood.  But Delmar’s son is no longer around to play with it.  It’s been a few years since their boy passed on.  Yet the Waglers’ loss still seems fresh.
Five at the time, Galen had been waiting to cross the busy rural Indiana byway the Waglers live beside.  Standing patiently as he’d been taught, he watched an oncoming car go by, then darted out for the other side.  The second vehicle, which had been tailing, hidden close behind the first, hadn’t a chance to stop in time.
Delmar gets quiet.  His eyes have begun welling up, red.
But slowly, a smile breaks through.  He knows his boy is in heaven, he says.
He just got there ahead of the rest of us.
The Amish are blessed with an abundance of children.  Yet they feel the loss of one of them as acutely as any parent would.  “Getting there ahead of the rest of us” is an idea that many who’ve lost a child express.  It’s a consolation that brings the focus back to the big picture. We are not here forever.  A higher goal awaits.
Here on earth, children are also very important in helping Amish families function.  As part of their upbringing, they are put to work–in garden, kitchen, shop, and field.  Some have criticized the Amish for this practice, calling it harmful.  Amish vehemently disagree.
Ben Miller, an Ohio-based woodworker, explains why having his children involved in his business is so important to him.  As far as family goes, Ben says, “that’s the only goal I have.  I mean, obviously, we all want to get to heaven; that’s the ultimate goal, but besides that, supporting my family.
“I’m not really a pessimist, but in some people’s opinions I probably would be.  But what more do we want?” Ben continues, “I’d like to do something [so] that I could work with my kids now.  But in [the woodshop] they’re going to have to wait till fourteen, and the oldest is five.
“We grew up on a farm.  At five, we were milking cows.  And some people would say, ‘Well, it’s child labor.’ ‘You’re abusing them.’ It’s not abuse.  It’s something that every American should have done.”
A business, or a farm, or even simple  household tasks allow the Amish to train their children in pillar virtues: hard work, diligence, obedience, trust in God.  In this sense, the home business plays a key role, contributing to what the Amish seek to accomplish by living within close-tied Christian communities.