Orlando Fragasse was his real name, and he was my friend. “Peach” or “Peaches” is what everyone called him though, on account of his big peachy-looking cheeks, a nickname he picked up in childhood and stuck, to the point that even his own children would use it. 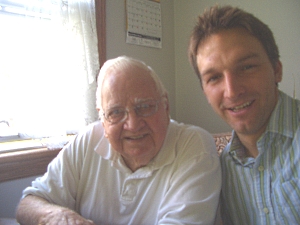 We met on my first bookselling trip to Holmes County, and Peach’s place, the creaky but cozy home a stone’s throw from the New Philadelphia courthouse, is were I stayed, most nights, on every Ohio Amish visit since.

I wasn’t the only one who enjoyed Peach’s hospitality.  His home was open to loved ones and strangers alike, and there always seemed to be someone stopping by for a visit.  I never had to worry about a place to stay; a phone call the week before to mention I’d be up would do, show up anytime, he would tell me.  There would probably be some heavenly rice or spaghetti-and-meatballs waiting.  Peach didn’t want you hungry.

The spaghetti dinners Peach put on were legendary, both the ones for family on Sunday, and for the church, which he stayed active in even in later years, when he was getting around with a cane and didn’t hear so well.

Peach was known all about, which became obvious whenever we went out to breakfast, to Dee’s or Michael’s or one of the other joints around town, where someone would always be coming up to say hello.  Breakfasts out were something like our informal tradition. One of my favorites–and I think his–was a drive out to Boyd and Wurthmann’s in Berlin in the middle of Amish Country.  It was a glorious summer day and his smile seemed even a little bigger than usual.

Living all his life next door to Holmes County, Peach had a lot of respect for the Amish.  And he even had a little Amish in him, with his seven children who had all settled within walking distance of his home in the New Philly/Dover area.  My Amish friends would chuckle when they heard about this friend of mine with an Amish-sized family living in New Philly.

A stroke last year slowed him down a bit, and I didn’t know what I’d find visiting him again last summer.  Peach was in his usual good spirits though, pointing me at the fridge and getting me to sit down and chew the fat for awhile, as he so enjoyed (and as did I).  He wondered if he would make it to 90, like no one in his family had.  He seemed a little doubtful.  I tried to get him thinking about 100, but it wasn’t to be.

Peach did finish his 9 decades though, this past February.  He died peacefully Tuesday before the usual lunchtime visit from his youngest, Suzi.  You don’t want the old people in your life to die, but that’s what they do.  That fact doesn’t make you miss them any less.