An update on Sarah Hershberger, an 11-year old Amish girl who was recently the focus of a public battle over child welfare and parental rights.

Sarah was diagnosed in 2013 with a form of leukemia described as “highly curable.” After undergoing conventional chemotherapy, Sarah’s parents elected to remove her from the treatment due to the adverse side effects. 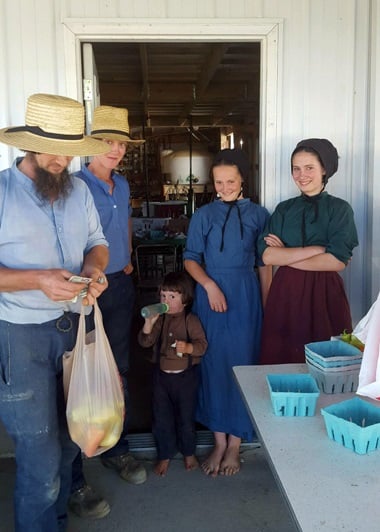 Sarah Hershberger and family, September 24. Sarah is second from right. Photo by 1851 Center For Constitutional Law

In lieu of a conventional approach, they used “natural medicines” to treat her. The Hershberger family ended up fleeing the country after the court approved a limited guardianship to force her to undergo chemotherapy.

A recent article in the Medina Gazette provides an update on Sarah’s condition, which thankfully appears to be good:

A Columbus attorney has announced that a 12-year-old Amish girl is cancer-free, despite courtroom testimony last year from doctors that she would be dead in six months without chemotherapy treatments.

Maurice Thompson, the executive director for the libertarian nonprofit 1851 Center for Constitutional Law, said the girl, Sarah Hershberger, shows no signs of cancer and appears to be healthy.

“She had MRIs and bloodwork, and the judge over the last year helped facilitate at least one trip to the Cleveland Clinic. The MRIs did not show any cancer,” Thompson told The Gazette on Friday.

He said the family will continue to treat the girl with less-invasive, alternative medicine.

Sarah’s case became a flashpoint for the conventional-versus-alternative treatments debate. At the time, hospital attorneys suggested that removing Sarah from conventional treatment would be “almost certain to lead to Sarah’s death” within a year.

I assume this news will be taken as support for the alternative medicine approach. But the most important thing that all can agree on is that Sarah is apparently well, over two years after her diagnosis.