Joseph Hershberger, 41, and Sherry Thomas, 32, had already been charged with eight counts of arson for barn fires in the Elkhart County area, including Amish-owned barns. The eight fires were started in southern Elkhart County and northern Kosciusko County periodically throughout 2021. Charges for the barn arsons were brought against the couple in December, and it sounds like they have admitted to the crimes. Now, new charges have been added, revealing that the couple targeted not only barns. From the South Bend Tribune:

A couple accused of committing a string of barn fires in Elkhart County now faces new arson charges in Marshall County, with officials alleging the pair set fire to an Amish school southeast of Bremen.

The new charges against Joseph Hershberger, 41, and Sherry Thomas, 32, come as their Elkhart County cases appear to be nearing plea agreements.

Elkhart County officials charged Hershberger and Thomas in December with eight counts of arson for incidents that date back to April 2021.

Some, but not all, of the barns the pair allegedly set on fire belonged to members of the Amish community. Court documents do not detail Thomas or Hershberger’s motivations, saying only that Thomas told police she and Hershberger would “drive around and he would pick out barns to burn.” 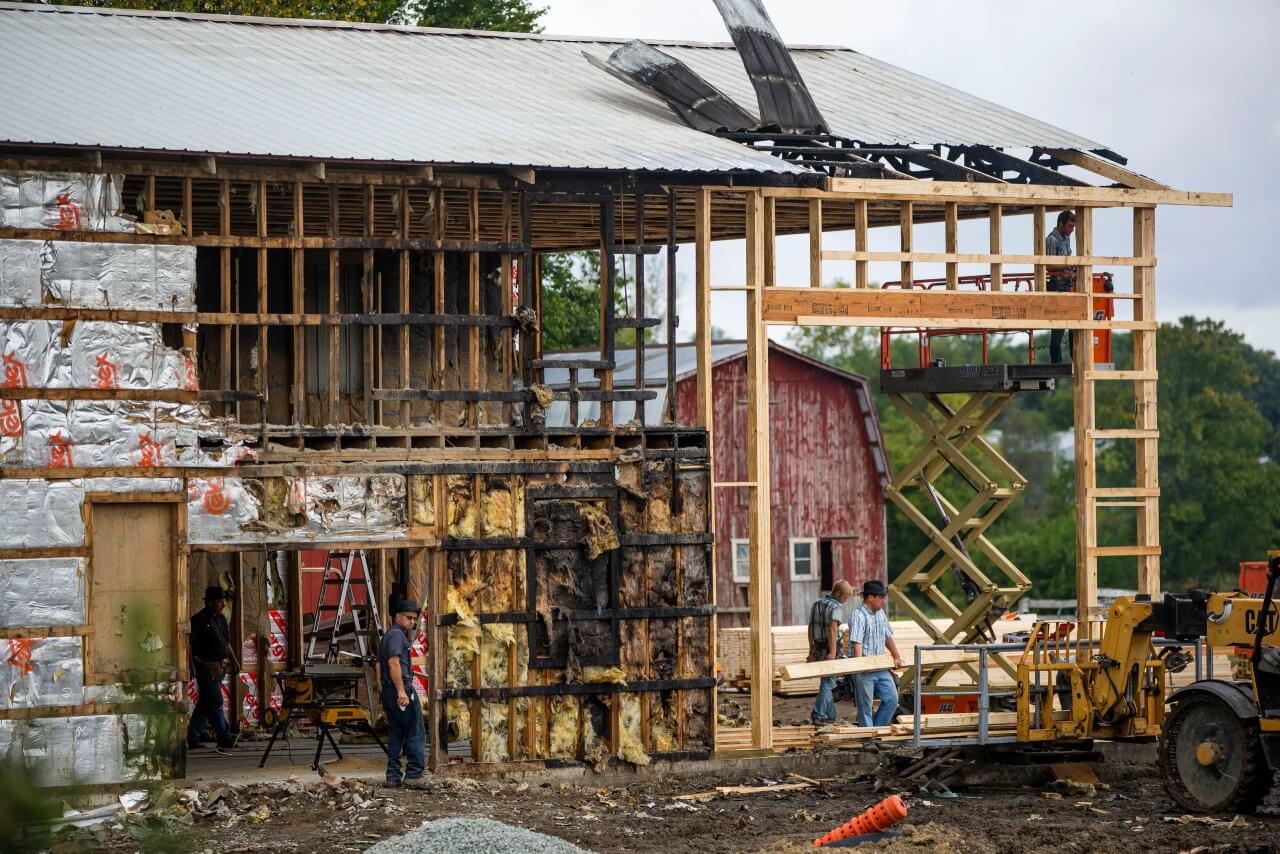 Martin Nelson’s barn was a target of the arsonists. Here we see the rebuilding process. Image: Michael Caterina/South Bend Tribune

Any plea agreements in the Elkhart County cases, however, will be separate from the new charges filed against the pair in Marshall County.

Those charges, filed last week, allege the couple set a fire at Rolling Meadow School on Birch Road east of Bremen in May. Thomas and Hershberger, already in custody for the arsons in Elkhart, allegedly told Marshall County detectives they had broken the window of the school, poured gasoline inside and lit a match.

By the photos included in the linked articles it appears that some of the victims were plain Mennonites (there is an Old Order Mennonite community in the area). There are no indications here of their actions causing physical harm to humans, though in at least one case 30 animals were killed in a fire. Hershberger and Thomas, by the way, are locals, residing in the town of Nappanee.

Hard to know what goes through a person’s head to cause them to do something like this, repeatedly. And in this case it wasn’t just one person’s dark thoughts transformed to action, but a collaborative effort. Arson in Indiana is considered a Level 4 felony with a sentence of two to 12 years. According to court records, Hershberger is experienced at this crime, having had a previous arson conviction in 2006.