Last week we informed you of a new free online resource called The Journal of Plain Anabaptist Communities. Here’s a summary of one of the articles you might find of interest – Mark Louden’s “Plain Talk about Health: Linguistics Aspects of Mediation between Amish and Mennonites and Health Care Professionals”, courtesy of editor Joe Donnermeyer. 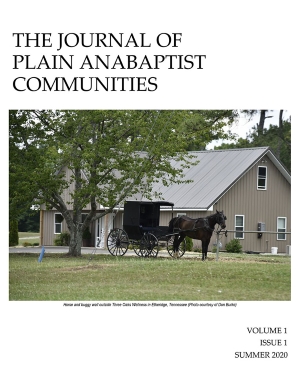 The inaugural issue of The Journal of Plain Anabaptist Communities was published on September 9. The focus was on health and well-being of the Amish. The lead article, written by Mark Louden, was titled: Plain Talk about Health: Linguistics Aspects of Mediation between Amish and Mennonites and Health Care Professionals.”

As Louden observes in this article, all Plain adults are bilingual; however, the fact that the primary everyday language for most is Pennsylvania Dutch is important for understanding how they navigate the health care system. He estimates that approximately 10–15 percent of Pennsylvania Dutch vocabulary is taken directly from English (loanwords), usually words that refer to objects and concepts that were not familiar to the eighteenth-century founding population.

The influence of English on Pennsylvania Dutch extends further, in a less obvious way, on the level of meaning (semantics). Once, when asked why Pennsylvania Dutch is so different from the German spoken in Europe, a native speaker remarked, “Fer Deitsch schwetze, musscht du Englisch denke” (“To speak Pennsylvania Dutch, you need to think in English”). There is truth in that observation.

Louden provides examples like the following: the words for body parts and basic bodily functions are typically not borrowed from one language into another. In the Pennsylvania Dutch context, eighteenth-century immigrants did not encounter heads, hands, and feet for the first time after their arrival in North America, nor did they learn to breathe or burp here. Not surprisingly, then, when speaking about basic anatomy and physiology in Pennsylvania Dutch, mostly inherited (native) vocabulary is used, as with en verbroche Bee (a broken leg).

But as medical science has progressed since the colonial era, the English words used in this semantic area are naturally borrowed into Pennsylvania Dutch, for example, hospital. In the eighteenth century and later, injured or ill Americans were treated at home. Hospitals in the modern sense did not exist until later, so it makes sense that when they were established in the United States, Pennsylvania Dutch speakers simply called them Hospitals.

Aside from loanwords, Louden describes three other semantic influences of English on Pennsylvania Dutch that can be seen in three types of vocabulary: loanblends, loanshifts, and loan translations.

Loanblends are compound words that combine native and borrowed elements in translations from one language into another. Examples of these abound in Pennsylvania Dutch, including Emergency-Schtubb and Operating-Schtubb (Schtubb ‘room’).

Loanshifts refer to native words that have had their original meaning adapted to match a similar word in the influencing language, such as the verb doktere ‘to treat medically, doctor’.

Finally, loan translations are compound words and expressions that are translated verbatim from one language to another, as in the Pennsylvania Dutch word for ‘medicine’, Dokter-Schtofft, which is modeled on the nineteenth-century colloquial American English expression doctor stuff.

Read Mark Louden’s article in full here, or view the full contents of the first issue. You can also register for the journal  and receive notices of the release of this semi-annual journal, and also to sign up for various roles, such as an author or reviewer.