Do the Amish live in Ireland? There are no Old Order Amish communities in Ireland, but Beachy Amish do live there. The question is revisited today by irishcentral.com in an article titled “Did you know Ireland has an Amish community?”

The Christian Fellowship of Dunmore East, Co. Waterford is Ireland’s only Amish-Mennonite community.

It was founded in 1992 by William McGrath, an Irish American who converted to the Mennonite branch of Christianity after fighting in WWII and went on to establish Mennonite churches around the world, including in the homeland of his ancestors.

The community, which runs a popular grocery, bakery, wood furniture shop, and bookstore called Jaybee’s, is made up mostly of immigrants to Ireland. Its leading pastor, Daniel Yoder, and his wife Barbara, who have been there since the beginning, came to Ireland from Apple Creek, Maryland, the Amish stronghold where they grew up.

I suspect they mean Apple Creek, Ohio, not Maryland. Beachy Amish share similarities with Old Order Amish in areas such as religious beliefs, church structure and plain clothing, though permit more technology, including cars and electricity, and are more mission-minded. 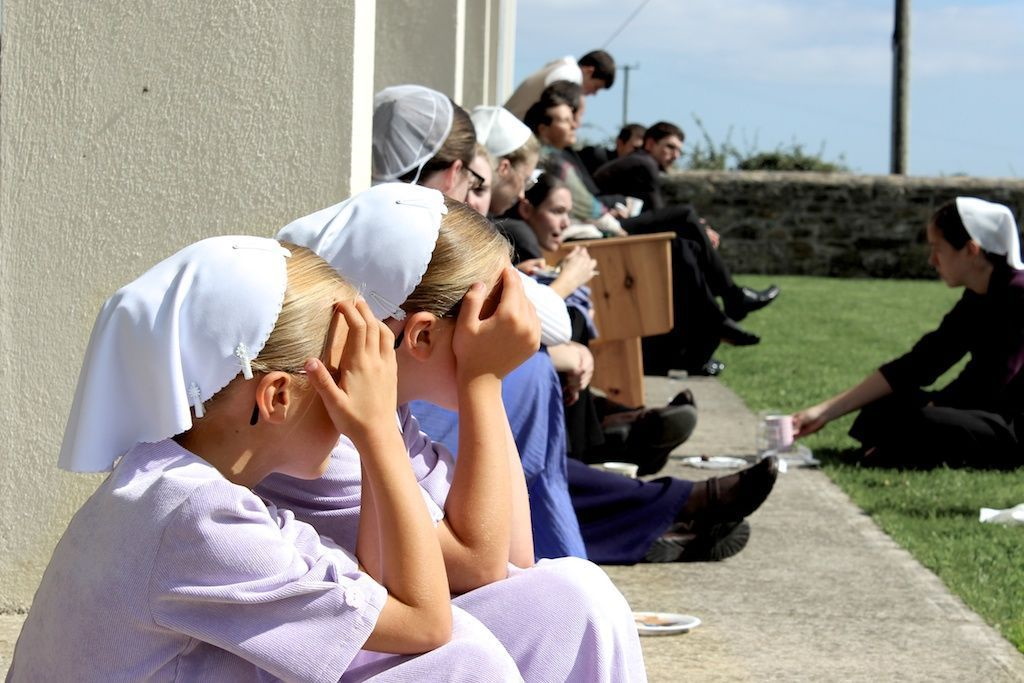 The piece largely uses a 2014 article published in University Times (“Ireland’s largest student newspaper”) for reference. The apparent geography error notwithstanding, the source article is an interesting visit to the community, described as 75-strong at the time. Editor Rachel Lavin is invited to service and Bible study, and describes her visit:

The pastor begins with a short service and then everyone rises for bible study. The children and women move to separate rooms, where we sit around in a circle and introduce ourselves. There are about fifteen Amish women and all but one have American accents. (she is South American). They begin with offers to testify. There are some suggestions for relations teaching in a settlement in Ukraine, a prayer for Susan, who is heading back to her own home settlement in America after two years and an offer to bulk order some oats from the North if anyone wants some.

We then begin the bible study class and between reading sections and analysing them as we go I can’t help but feel as though I’m back in an English literature tutorial, such is the steadfastness and concentration with which the women read and interpret the passage. Lead by an older woman with a kind softly-spoken voice, she deduces from our passage ‘that we are not to follow earthly beings or worldly goods, but to follow God and his message only’. The others nod in agreement and although I was skeptical as to what new I could learn at bible study, this little snippet provided me with an interesting context for the rest of the day.

We return to the service at the same time as the children and rejoin the men who were taking their bible study in the main church and begin another part of the service, this time lead by a visiting American pastor. After a final round of hymns we break. The women begin to hastily begin to prepare lunch; a large potluck dinner for the whole congregation, and the men lay out large tables in the back end of the hall.

She next learns the origin story of the community:

A warm motherly figure named Barbara approaches me to welcome me and invite me to eat. A generous buffet has been laid out and after struggling with what to select, I settle on a plateful of meatballs and rice dishes, meat casseroles and spiced pickles and vegetables, and we sit and tuck in. Barbara’s husband Pastor Dan joins us. A softly spoken and contemplative man, he is one of the original members of the Amish community which was was founded little more than twenty years ago. It was lead by William McGrath, an ex-army intelligence officer who had converted to the Mennonite religion after a crisis of faith during World War two. He went on to travel widely, setting up Mennonite churches all over the world, including Costa Rica, Germany and Switzerland, but his pet project was to bring a Mennonite church to his ancestor’s homeland, and that he finally did in setting up ‘The Christian Fellowship’ in Waterford in 1992.

However, William needed to populate this select community in a ‘land of strangers’. Pastor Dan who grew up Amish, came to the Amish-Mennonite settlement with his wife Barbara in 1996 for one simple reason, ‘I was asked’. Knowing they were needed the couple moved over, but with no official community centre or even community of houses for them to live in, they found themselves renting in the city, a far cry from where they grew up in the rural Amish towns of AppleCreek in Maryland.

This was a ‘huge change’ Dan recalls. “I had always lived in the country and now I was living in a housing estate. Young people used to drink outside, it was very difficult. It took us three years to find a house’.

As more families emigrated over they moved into more houses in the same area and the community developed, eventually making a small local rural area in Dunmore East their own.

There is a lot more to the piece, on the community’s mission work, way of living, and singing.

A 2017 article in GAMEO puts the membership for this group at 24. The church also has a website, with FAQs, sermon recordings, and info on how to visit their weekly worship service. One note – the two articles referenced here both describe the group as “Amish” in their titles. But here is the first FAQ from the church site:

The short answer is NO. A little more detailed answer could be: we share most of the fundamental beliefs of the Amish but differ in practice. The most obvious examples would be we do not shun the use of electricity, home phones, and automobiles as do the Amish. We would rather be known as those who love and follow the Lord Jesus Christ. Our webpage “Anabaptism Today” is a good description of what we believe.

The site also has a photo of the congregation outside their church building: