Do you ever use mass transport?

Spending much of my year in Europe, I am on buses, trams and trains a lot. Polish people are surprised when I tell them that outside of a few big cities and the Northeast corridor, we North Americans don’t really do public transportation.

For instance, I recently told a couple colleagues about the first time I had ever been to my home city’s train station.  It was this past February, to pick up visiting Amish friends. I didn’t even know where it was till then.

Poles can’t believe that kind of statement.  Everyone knows where the train station is, after all. 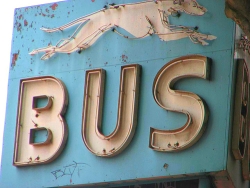 What’s prompted this post is a recent article (no longer online) about Greyhound extending its service to cater to Amish in a central Kentucky town.  Venerable Greyhound is technically a private company–and actually under Scottish ownership, I was surprised to learn.

Members of a central Kentucky Amish community have taken to using a recently opened Greyhound Lines bus stop at Sonora Farm Supply to make their way across parts of Kentucky that are too far to travel by traditional means.

Store owner George Sadler told The News-Enterprise ( http://bit.ly/J6Q9fH) members of the Amish community asked if a stop could be arranged in front of the store. Sadler says he called Greyhound the same day a stop in Elizabethtown shut down.

Miller said bus line officials often don’t like to have to include small towns along their routes because there’s no guarantee there will be many riders there.

“They have to realize the creek would go dry without the little runners off it,” he said.

I think it’s a safe bet the Amish demographic uses trains and buses at a much higher rate than the average American.  They are among the little runners keeping that creek flowing.

What about trains?  Here’s my take from a post on Amish usage of Amtrak last year–titled, of course, Amishtrak:

I’ve only ridden Amtrak once.  I went from Chicago to Kansas City about 10 years ago.  It was a pleasant  journey, though it felt a little surreal.  This was probably because I was riding in a train in America.  We, remember, do cars.  All those beautiful, wide, well-maintained roads out there, and here I am on a train.  The train was mostly empty, I recall.  Still, it was hard to beat the feeling of barreling through the night past Iowa cornfields.

Amish, who use trains relatively frequently, are among those who benefit from keeping rail service running.  For Amish and other Plain people, many of whom don’t fly, trains can be a good option when traveling long distances.  In fact, the most conservative Amish do not permit the hiring of cars.  Buses and trains are really the only way for them to travel far.

So I thought I’d throw it out–how much riding have you done on trains, buses, and the like?  Did/do you enjoy it?