If you’ve visited more than one or two Amish settlements, you’ve probably at some point been struck by contrasts–sometimes stark differences. 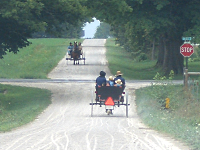 The most immediately obvious signs are material. Homes, buggies, clothing and other items tell stories about how the area’s residents choose to be Amish.

Today Jim Cates looks at those differences in Indiana’s two largest Amish communities–the Elkhart-Lagrange County area, whose best-known place is Shipshewana, and Adams County, centered around the town of Berne.

Threading That Camel Through the Needle’s Eye

I have a friend who refers to the Elkhart-LaGrange settlement as the “Flower Children of the Amish.” She is not derogatory. She is, shall we say, a colorful individual who enjoys embroidering her descriptions in memorable ways. She also lives in Fort Wayne, as do I. We are thus set almost equidistant between the settlements of Shipshewana and Berne, Indiana. And when compared to the Amish of Berne? The Amish of Shipshewana are radicals indeed.

The discrepancies in lifestyle between these settlements occur because of the very different paths their founders took, both from Europe and in this country, to find their niche in what would then have been the Wild West (now the Midwest). However, this blog focuses on recent economic efforts between the two, as an example of the differing outlooks on prosperity that groups of Old Order Amish employ*.

The Amish are first and foremost humble. America is a consumer culture, and as a gross generalization, we are dedicated to “bigger and better:” cars, houses, clothes, or any other possession or accomplishment that will call attention to the fact that we have “arrived.”

In contrast, ostentatious display of wealth in an Amish home would be apt to invite a visit from the deacon  – and removal of the offending display. As Christians, their purpose here is not to amass worldly wealth, but to store treasure in heaven. In the words of Christ, “I say unto you, it is easier for a camel to go through the eye of a needle, than for a rich man to enter the kingdom of God” (Matthew 19:24).

And yet, what constitutes “rich?” There are Amish families who have amassed several millions of dollars, while there are others who survive on the benevolence of the church. And just as is true in the broader society today, there are many more Amish families who tend toward a broad middle-class than toward the upper tier of financial security. 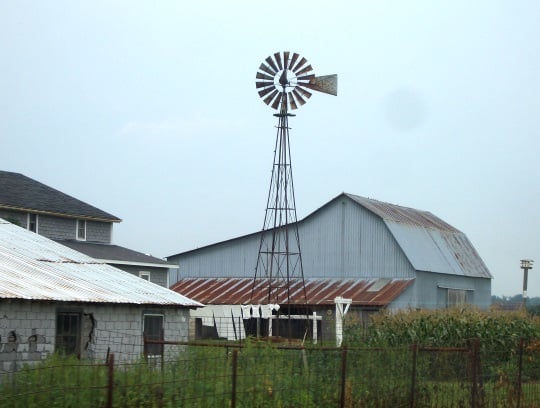 Berne and Shipshewana are at the extremes of this puzzle. Both Old Order, Berne is a small, Swiss settlement. Theirs is a strict Ordnung, limiting technology. Many churches still forbid indoor plumbing. Their people abide by the expectation of the open buggy, and through each tumultuous Indiana season brave the weather. Their only concession to inclement conditions is the use of large black umbrellas.

Their houses are neat, but decoration is limited. Instead, items there are more likely to be utilitarian. Lighting is accomplished through lamps, and the icebox is still present in most homes, with ice cut in the winter to tide the family through the spring and summer months. The same utilitarian approach is true of their schoolhouses. Items are designed to teach, with less emphasis on décor or lightening the atmosphere in the classroom.

The spare feel to homes and schools is not all a product of the Ordnung however. Sufficiently rural to be bypassed by most tourists, and also sufficiently rural to have few opportunities for construction in the immediate area, commerce is limited. Men often drive several hours to and from job sites to find employment, and even then may have periods in which they struggle to find work. The recent economic downturn hit the Berne construction crews, as it did the rest of the country, and it has only been in the recent months that work has revived. Funds for anything more than essentials have thus been in short supply.

In contrast are the Amish homes of Shipshewana and the nearby area. These are larger, well-kept buildings. More likely to have curb appeal with landscaping that includes ornate flower gardens and shrubs, they provide a sense of affluence. Indoor plumbing is the norm, and buggies are enclosed for greater comfort.

Within the homes, furnishings are less utilitarian and more styled, while knickknacks, collectibles, and china adorn hutches and wall space. Homes may also include such labor-saving devices as washing machines, refrigerators, freezers, and battery-powered lamps. Schoolhouses are notable for the bright posters on the walls, and touches imparted by teachers to give cheer to the classrooms. 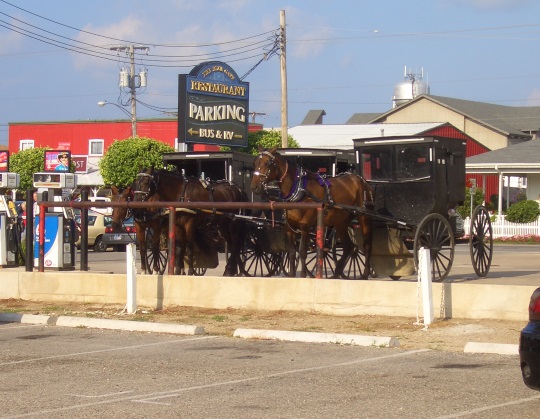 While the Shipshewana area is arguably the most liberal in the Elkhart-LaGrange settlement, or “high Amish” with an Ordnung willing to embrace technology, the remainder of the settlement is also high Amish compared to the low Amish, or more conservative approach, of Berne. And what can be said about the differences in the way these Old Orders choose to live?

We know that competition is fundamental to almost all living organisms (for example, longstanding research has found that a cockroach is actually quicker to negotiate a maze if it is running against another cockroach.) As humans a part of that “competitive edge” seems to be a desire to demonstrate our success. It is that hochmut, or pride, that the Amish resist.

And yet, the competition to show success is relative to the standards of the community. Elkhart-LaGrange has the economic support of the trailer manufacturing industry, employing several hundred Amish workers (the economic downturn hit hard, but the industry is in recovery.) And tourism, while not as large an industry as Pennsylvania, continues to be a mainstay.

Together, these areas of commerce boost the per capita Amish income in that settlement. “Pride” in possessions is thus not demonstrated if the large majority of homes have the same décor, labor-saving devices, and landscaping. Rather, it becomes a matter of staying in step with the community.

In Berne, by contrast, there has been no such influx of commercial success to boost the median Amish income. Staying humble but in step – that is, appearing neither ostentatious nor poverty-stricken – then involves a much different set of expectations for the appearance of home and surroundings. The Amish there position themselves to meld into the group and remain similar to their neighbors, just as their cousins do in Shipshewana, approximately 100 miles north.

And yet, the question persists: do the Amish succumb to the desire for money? That question is discussed in the next blog.

*For a more thorough and scholarly analysis of cultural issues among the Amish, see Plain Diversity: Amish Culture and Identity by Steven M. Nolt and Thomas J. Meyers, 2007. For a better understanding of Indiana Amish see An Amish Patchwork: Indiana’s Old Orders in the Modern World, Thomas J. Meyers and Steven M. Nolt, 2007.

Jim Cates is the author of Serving the Amish: A Cultural Guide for Professionals. He can be contacted through this blog or his website at servingtheamish.net.