Amos Hertzler is an Amish child born with a rare esophageal defect.  We’ve followed his story since it became public in 2011, mostly through news coverage and some reader reports.

The Buffalo News is reporting that Amos is returning home after 15 months in a Boston hospital:

But, Amos’ treatment for a rare esophagus problem did not work out as his family and doctors had hoped.

The Buffalo News has been chronicling his case for more than a year, and many people from the wider community have responded to his story.

Amos’ esophagus was not successfully attached in Boston, his family told The News this week.

“They weren’t able to do what they wanted to do,” said Aaron Hertzler, Amos’ father, who spoke to The News by phone from Boston, as the family prepared to bring Amos home.

“It didn’t work out quite well. It kept leaking. They had to redo it, and it leaked again.”

Aaron Hertzler said his son will come home with a feeding tube, like the one he had before he went to Boston.

Amos will also be on oxygen to breathe, at least for a while, the family said.

Amos’ family and western New York Amish community have held benefits in the past to help defray his high medical expenses, such as a benefit breakfast held at a fire company in Cattaraugus County.  Another is scheduled for tomorrow:

Now, the Amish community in Western New York will hold another benefit for Amos, from 6:30 a.m. to 2 p.m. Saturday in the Otto Fire Hall.

A full Amish breakfast will be served, and donations will be accepted for Amos’ continuing care.

“People have helped us so much,” Aaron Hertzler said. “We are very thankful.”

Below is a photo showing the menu from a previous benefit for Amos, taken by reader Tom.  If you’re in the area, you might enjoy this event and have a chance to help the cause. 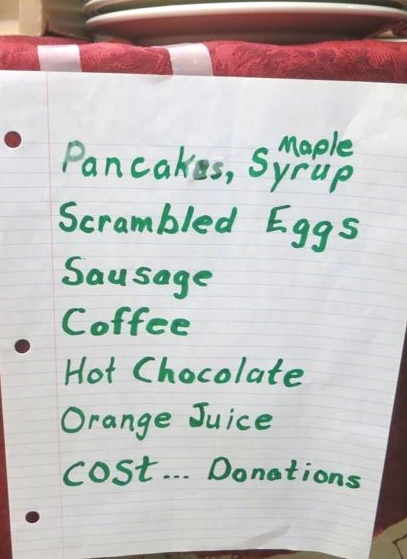