In our previous installment of An Amish Girl’s Adventures, Rebecca Miller of Holmes County, Ohio shared her family’s vacation to Niagara Falls. Rebecca is back with the story of a trip with friends to Mackinac Island in northern Michigan. As you’ll learn below, something about Mackinac Island made Rebecca and her friends feel right at home.

We started off from German Village market this morning at 5:30 with Green Country Tours. Our next stop was in Fredericksburg to pick up some more people. My traveling companions are my friends Anna, Esther, and Ina. After everyone was loaded except the Middlefield people who we won’t pick up until later in the morning we had devotions and then nap-time. Soon after we had picked up the Middlefield people, we stopped for breakfast at an Iron Skillet Restaurant. It was a neat place. We ate off of actual iron skillets and the food was scrumptious !

Once back on the bus and on the road again we had introductions. It sounds like we will have a lively time. There are quite a few locals whom I know and others are strangers, soon to be friends. This was followed by singing and story-time. Around 12:00 we stopped at a rest area, then Sara (tour guide) handed out scavenger hunts and we also played a group game.

By 1:30 we had arrived at Colonville, MI at an Amish home where they had scheduled a late lunch- or should I say- dinner for us. Wow! So much food, and it was so delicious! We’d have enough to tide us over the rest of the day. After lunch we visited Colonville Country Store.

Heading on north we stopped again around 4:30, and by 5:30 we could see the Mackinac Bridge, which is 6 miles long. Around 6:00 we arrived at our hotel. Later we walked out to the lake and spent some time there picking up shells, watching the gulls, and just enjoying the peacefulness of the lake. Then we walked to a KFC for a late supper. 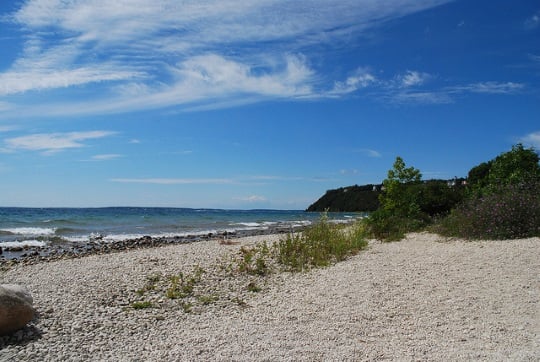 Who would have thought we’d be hungry after such a lunch, but we walked quite a ways and it felt good to sit down and eat. We also did a bit of shopping. Then went back out to the lake. By now the moon was out and it was so beautiful! We just stood there and took it all in for a while – the peaceful sound of water moving in, ever-moving, never- silent, yet, so tranquil. What a sight to behold with the moon on the water. Then we were ready to retire.

The morning dawned cool and foggy. After a hotel breakfast, we loaded up and headed for the ferry. We girls rode up on top. It’s windy and cold, but so invigorating. A half-hour ride brought us to Mackinac Island. It’s such a neat place, with no motor vehicles, only horse-drawn wagons, carriages, and of course, lots of bicycles. So we Amish fit in pretty good. 😉

We did some shopping and fudge tasting, then loaded on huge 35-person carriages for a tour of the island. We saw the Grand Hotel, which has 385 rooms and a 600 ft. porch. It’s huge. We also drove by the Governor’s mansion, Fort Mackinac, and stopped at Arched Rock. Our driver was a funny fellow named Bob. He gave us lots of info about the Island. There are between 300 and 500 horses on the Island. His horses get 2 baths a day and work only 4 hours.

We then rented bikes and biked around the Island, which was 9 miles, but it didn’t seem as far because it was mostly flat. Some of them used 2-seaters. They were harder to control and looked pretty funny. We girls stuck together and had a lot of fun! When we got back from our ride, we tried some fudge and had lunch. It started to clear off. It was interesting seeing all these horse-drawn vehicles driven by non-Amish men. There was the hay wagon, luggage cart, delivery truck, mail wagon, manure hauler, etc.

The ferry ride back to the mainland was awesome! The sun was out, clear blue skies, breezy and miles and miles of clear blue water, windy enough for slight whitecaps. Beautiful!

After we got back we checked in at our hotel in Sault Ste. Marie . We took a 2-hour boat cruise on the St. Mary’s River, through the Soo Locks which are 21 feet long, from Lake Huron to Lake Superior. Coming through the Locks we saw a huge ocean freighter locking through beside us. It was from Hong Kong and was about 655 feet long by 75 feet wide. After we got back to the hotel we ate at their restaurant. Service was really slow and my soup was burnt. We walked around a bit and spent some time in the exercise room.

What a morning! First we overslept, and didn’t wake up till Mom called me. I only spoke a few words with her, while waiting on my turn for the restroom and with 4 girls in a room, it seems you can’t hurry. We hurriedly grabbed some breakfast and ran for the bus. They were already waiting for us. Then while I was looking for something under the seat, Esther was holding my cappuccino, with a muffin stacked on top. Someone bumped into her, knocked the muffin off (we never found it, though later Ina and I both found some mushed on our coats), and spilled the drink. We searched high and low for that muffin, but it had disappeared. What a way to start the day. I also forgot to collect my $20 which I had left at the front desk for making a phone call. They were going to give me the change in the morning, so guess that was an expensive phone call. 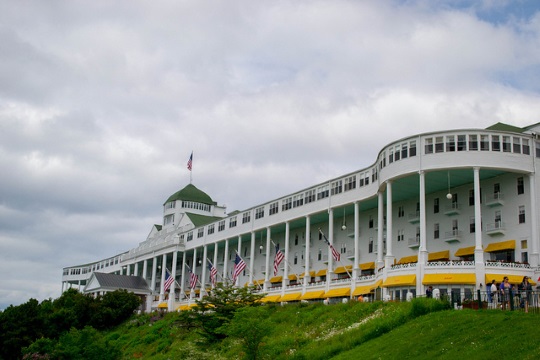 We went up into Canada to the Olgama Railroad for a 114-mile ride north to Agawa Canyon with the Agawa tour train. It was about a three-and-a-half hour ride. We had lots of beautiful scenery – lakes, rivers, and gorgeous fall foliage. We had a 2-hour stopover. We climbed over 300 steps up to the lookout. What a great view! Then we hiked to Otter Creek Falls, which is 45 feet high. The three-and-a-half hour ride back seemed long. We had lunch and sang a while to pass the time.

It took over an hour to get across the international bridge and through customs. On the way back we had a beautiful view of the sunset off of Mackinac Bridge. We had supper at Audies and took a short walk out to the lake and the Bridge.

What a beautiful morning! As we started home we got a last glimpse of the lake with the rising sun above a cloud bank. Wow! We started the day with singing as we headed south. There were also a lot of good-natured jokes and stories going around. We played the Cushion game, that got everyone awake. Then more singing and harmonica playing.

We stopped at Frankenmuth, MI just before 11:00, in time to see Glockenspiel Uhr tell the Pied piper story. It has 36 bells. We had lunch at the Bavarian Inn. Everything was so neat! The waiters and waitresses were dressed in traditional old country style clothing. We had a delicious Swiss-German lunch. A jolly, older lady came through playing the accordion while we were eating. We took a walk through town, and wished we had more time there. It’s such a cute laid-back little town.

Homeward bound, they passed the mic around and we shared stories and highlights of the trip and gave reasons we chose to go on this trip. Quite a few of the couples were celebrating special anniversaries. Sara gave away some prizes. I was even a winner once! I received a Grand Hotel toothpick holder. We did a quick supper stop at a travel plaza, sang some more and played games. It sounds like everyone had an enjoyable time. I sure did! We had a very enjoyable little getaway and great weather all the way and met lots of friendly people. By 8:30 it was Holmes Sweet Holmes!