I have a favorite pair of shoes. They’re cold-weather hikers, originally waterproof but after a few years of use, not so much anymore.

That’s not the problem, though, as apparently a tiny hole has appeared, somewhere, in the sole (where exactly, I haven’t been able to determine).  However it lets enough water in that walking around on a rainy day or on wettish pavement soon leads to soaked and freezing toes.  So now I’m pondering whether, if I can’t fix it myself, it’s worth having re-soled (assuming that’s possible). 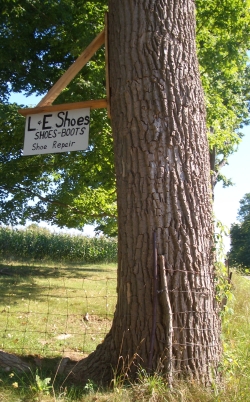 I’m the type of person who, when he finds a type of clothing or shoe that fits well, buys a back-up supply for the future.  Same size, same color, yep, I’ll take five.  Perhaps that reflects my disdain for clothes shopping as much as anything.  So yes, I’d probably be willing to pay a fairly high ransom to get these winter walkers pavement-worthy again.

Shoe repair is another one of those archaic-seeming professions that the 21st century has left in its rear-view mirror.  The term “cobbler” brings to mind limericks and fairy tales faster than an active profession.  I wonder if the younger generations even know what a cobbler is?  I’m sure we can still find shoe repair places in English society, but I don’t think it will make anyone’s list of boom industries anytime soon.  Not in a culture oriented towards tossing worn things away.

I shot this photo in the Belleville, Ohio Amish community.  Amish settlements often have shoe stores, and not too surprisingly, places where you can get your footwear patched up again.

So, to throw out a question: Have you ever patronized a shoe repair place–or to be more romantic about it–a cobbler’s?  (And while we’re at it, are my clothes-buying habits just weird, or does anybody else out there follow the same strategy?)