Dewey Mishler was one of the neighbors who helped with the cleanup the day after the fire. He said there were at least 100 people on hand to help, noting, that’s common for this community.

On Thursday, a crew of Amish workers set the foundation, and by Friday they went to work raising the barn.

Dozens of helpers were on hand in a show of community support.

When I saw the headline, I thought this was a story about Amish helping another Amish family, which happens regularly when disaster strikes or simply when a new barn is needed (in fact, just this past week there have been two such stories, out of Lancaster County and New York state). It’s not said in this story explicitly that the Beachy family are not Amish – but the story mentions an insurance company being involved, and a pickup truck being recovered from the burning barn.

Furthermore, this is not the first public misfortune for this family. In January 2019, Linda’s husband horse auctioneer Dean Beachy and their teenage son Stevie were killed in a mass shooting in State College, PA. Dean Beachy was well-regarded in the community and in his trade, with the Holmes County commissioner summing it up:

“This just goes to show how well Dean and his sons were respected,” Miller said. “They were all neighbors who would have done this for any other neighbor. This is truly a compliment to Dean Beachy, and it’s too bad he’s not here to see it. 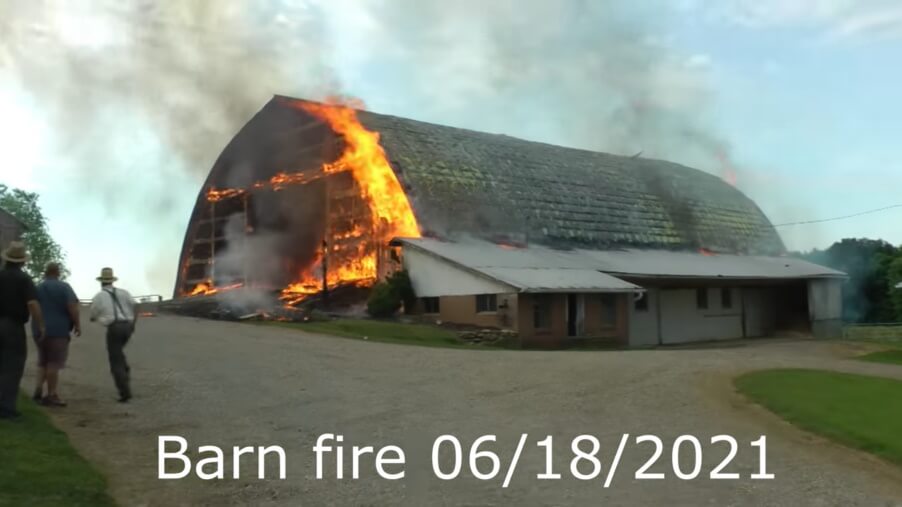 Mother Linda and sons Bobby, Benny and David released a statement which read in part:

“Words could never express enough for the way we’ve been blessed by this community in the wake of our barn burning,” the statement from the Beachy family – mother Linda, and sons Bobby, Benny and David – read. “We will never forget the personal sacrifices made by so many individuals.”

Of course, there were no doubt non-Amish people in the community involved here as well, so all credit due. Finally, another good note to this story is the fact that none of the horses inside the barn were injured.

No one likes seeing stories of disaster, but what happens after certainly can be called “good news”. Helping others in need in times of misfortune is par for the course for the Holmes County community, and for the Amish in general. And stories like this are a reminder that help is not only given to those within the Amish community in a spirit of Christian aid – but to those outside it as well.