Not An Outhouse: The Amish Phone Shack

In today’s guest post, David Arment of armentphoto.com discusses those funny little buildings you see here and there in Amish communities.

One thing that seems generally true is that Amish are reluctant to accept technology that connects them to the outside world. We English would say they live “off the grid”.

In our area, phone shacks have sprung up as the answer to the need or desire to have this useful technology while keeping the phone line outside. The phone shack is a central place where church members can go and use the phone. Phone shacks come in different sizes.

Some are about the size of an old-time outhouse and some English people have thought that is what they are. Other phone shacks are bigger. And I’ve seen phone shacks within a few yard of one another.

One could logically tell that phone shacks are not outhouses because some of them are nowhere near a house. And take it from a guy who grew up using an outhouse, when the time comes in the winter to “go” you don’t want to have to walk very far, or stay outside very long when nature calls. These phone shacks can be at the end of a long driveway nearer to the main road, or they can be nearer to the house. 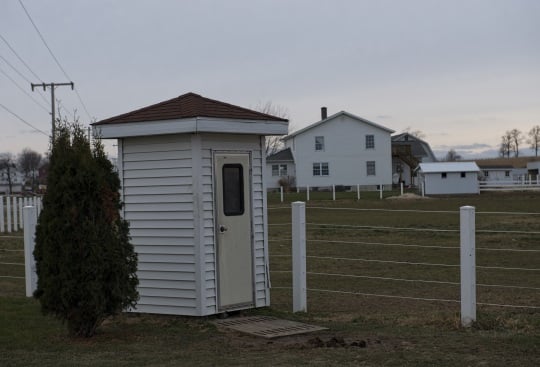 If you’re here for the bathroom, you’re in the wrong place

The phone shacks have recording devices (answering machines) inside. When you call your Amish friend you dial an extension and leave a message on that extension. They then retrieve the message and get back to you later. It’s a combination of the old party line and the old (but not so old) answering machine.

An interesting side note is that many of the phone shacks have doors and windows that look as though they were rejects from the local RV manufacturer. Some have the rounded corners typical of RV openings and black gaskets around the windows that you know would not be something an Amish person would build if left to their own devices. Since many or most of the Amish around here work in the RV factories from VERY early in the morning to early afternoon and then farm the remainder of the day, it is easy to imagine how these doors and windows make it to their phone shacks.

I have an Amish lady that I do business with. She and her husband have a phone in the wood shop where he works. Some bishops now allow phones in places of business. In this case the place of business is about 25 yards from the house. You can call and leave them a message and they get back to you.

One day this Amish lady sent me an email! What a surprise! So we started an email string on the subject at hand. The email string was short as she soon stopped emailing me. Then when I talked to her next she told me she does not have email, but her daughter who is a teenager (too young to have yet joined the church) has a “smart phone” and on that phone is email.

So at times she has asked her daughters to use the phone to send emails, but she told me it is so rare that I should never assume an email gets to her if / when I email here. So the communication by email ended as quickly as it began as it was unreliable in knowing who got what message. 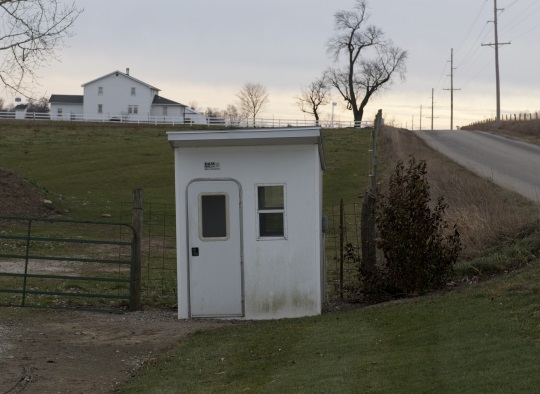 One Amish man with whom I do business has a phone in his office. He also has a fax machine. I can email him and the software between he and I converts the email to a fax. So he gets my emails as a fax, and I get his faxes as emails. And of course we talk on the phone.

The younger Amish, the teenagers who have not yet joined the church, have smart phones. You can see them texting away. One day in Shipshewana I saw a young Amish girl in a pony cart driving (I guess the pony was really just following the street) and texting as she went. At other times as with English of the same age you can see them sitting and texting or looking at their phones. Obviously if they decide to join the church they will need to give up their phones, unless the policy on phones changes along the way.

Some people believe that the Amish may accept cell phones better than “hard wired” phones. The reason being, cell phones are not hard wired into a grid or network. I don’t think we have seen that yet, but it will be interesting to keep an eye out to see if cell phones are more acceptable than hard wired phones.

One thing that also will be interesting to see is the acceptance of pictures taken with smart phones. Cameras have been off limits. In our area to capture a person’s face on a camera is not to be done. (However my wife told me of the Amish acquaintance who was out in public at a large event and just happened to get his picture taken. The picture ended up on the newspaper. A clipping of the picture is in the bedroom in a frame in the Amish house.) But I digress yet again…

As you know the smart phones all have cameras in them. So now the young Amish have smart phones and all the phones are cameras. Will they begin (or maybe they already have begun) to take pictures with their phones? Will this open the door to a reinterpretation of capturing images?

So one of the main points I want to impress upon you is that this is a fluid subject. What you read here today may change tomorrow and what is true in one area may be different just down the road where the other Amish church meets.

Call me if you have any questions, leave a message, and I’ll get back to you from the phone shack.

David Arment’s photography can be found at armentphoto.com, and at the Arment Gallery Facebook page. If you’re in Shipshewana, Indiana, you’ll find the Arment Gallery at 125 Morton Street. Drop in and give them a hello from Amish America.