You might recall the story of Kenneth Copp, a Pentecostal-raised man who joined the Amish and was last living in the Unity Amish community in Maine.

We previous looked at the Copp bakery and furniture shop in a post from a reader who visited the family (Visiting the Unity, Maine Amish Settlement).

Things have changed in Kenneth Copp’s life since that post appeared in 2013.

Bangor Daily News recently ran an article on Copp along with a video which you can view below.

Copp is no longer associated with the Amish church, and has apparently renounced his faith in God.

It’s a sad story – he continues to live in the area, but his wife has left him along with their five children still living at home, and he tends his farm alone. “I think a lot of the Amish would wish me out of here. I’m such a thorn in their flesh,” he says.

Copp still misses his community and appears to continue to live a low-tech lifestyle. He says the hardest part is “the loss of the social structure, the brotherhood as they would call it.”


He says he is technically in the Bann, though it doesn’t seem he ever officially joined the Amish church in Maine. Members of the community sometimes come to his aid.

Copp describes in the article how church members recently showed up to help him bring in his hay. “They’re officially not supposed to help me, but their humanistic neighborliness kind of wins out in the end.” 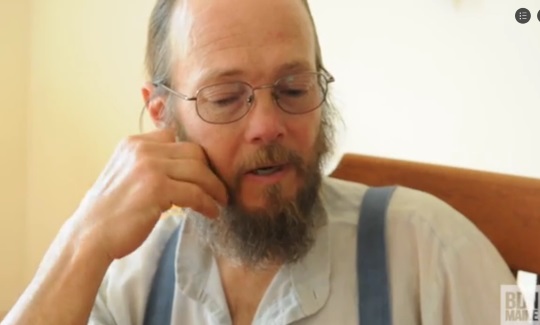 Kenneth Copp also appeared in a podcast, discussing his “deconversion”, in 2015.

In that interview (below) he strikes a note of appreciation mixed with contempt for his former community: “I do have much appreciation for various ways that they do still live their lives…but the faith…is basically altogether gone. I don’t subscribe to such superstitious primitive belief systems.”

You don’t often hear of non-Amish joining the Amish, then leaving again to arrive at atheism (former converts often find themselves in a more progressive Christian church of some sort).

People join the Amish for different reasons – some may be driven by things like lifestyle aspects and romanticism more than the spiritual basis which Amish will tell you is essential. It seems Copp was one who for whatever reason lost the faith he had, and landed in the other extreme.

Copp’s story is a good example that there is a lot more to being Amish than just wearing plain clothes and raising dairy cows. It seems like he has put himself in a difficult position between two worlds.

But maybe that is actually easier than committing fully to either?