If you’ve traveled through northern Lancaster County at any point in the last 168 years, you might have noticed a structure of religious importance lying just feet from the current Route 322.

The Pike Mennonite Church is shared by two groups of Mennonites (Stauffer and Weaver), who use it on alternate Sundays. Unlike most Amish, Old Order and Conservative Mennonites worship in church structures. 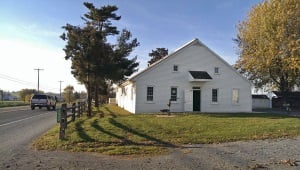 168 years is how long the building has been in service as a church. Constructed in 1840, it was originally a school. So why are the Mennonites moving after such a long time?

For a few reasons. Acoustics are apparently poor inside, due to 9-foot ceilings, and people can’t hear as well as they should.

Compounding that problem, it’s quite close to the road, and the noise of passing cars and motorcycles. Finally, the structure itself is said to be in poor condition.

The new meetinghouse will be built about 75 yards back. According to the article in Lancaster Online:

The new church will be slightly larger and will have higher ceilings to provide for better acoustics, but it will mirror the original structure in appearance and will be devoid of electricity and running water.

In the photo below taken from Google Street View, you can see two long horse sheds. These will likely stay put for now but may be moved in future.

And what will become of the old building? This surprised me somewhat, but according to Ralph Brubacker, builder of the new church, it will probably be torn down.