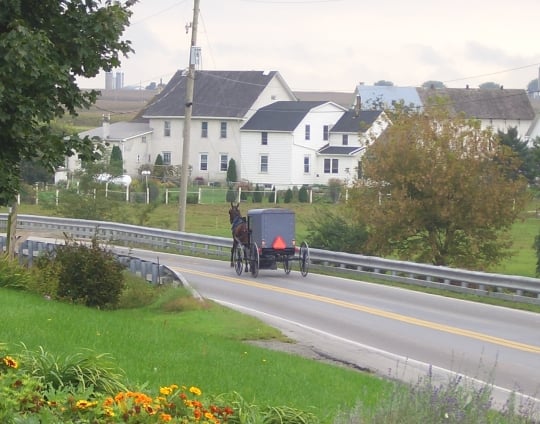 Where will you find the largest Amish communities?

Using the latest Young Center figures, here are the 12 largest Amish settlements as of 2017.

The numbers you’ll see in parentheses below are:

I’ve included a bit of info on each and links for further information. Which of these top 12 communities have you visited?

The Twelve Largest Amish Settlements as of 2017 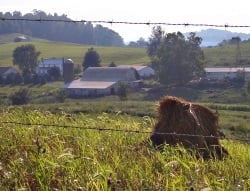 3. Elkhart & Lagrange Counties, Indiana (24,205; 181; 1841) – Amish in Northern Indiana are known for their RV production. It’s a generally progressive community which has gotten attention for challenges within the youth community. Home of the Connection magazine, the Shipshewana Mayfest Buggy Race, and the Pumpkinvine Trail. Read more on the Elkhart-Lagrange settlement.


4. Geauga County, Ohio (18,650; 132; 1886) – This large community east of Cleveland is often overlooked due to its proximity to the Holmes County settlement 90 minutes south. Home of the Geauga Amish Historical Library and loads of old-style ice machines found throughout the community. One of the big four Amish locations; after Geauga County, the next largest settlements drop off significantly in size. More on Geauga County. 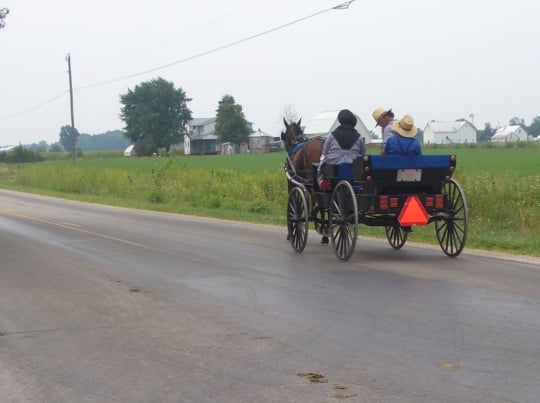 5. Adams County, Indiana (8,595; 58; 1840) – The largest “Swiss” Amish settlement (Swiss Amish have different customs and speak a different German dialect than most other Amish). Covered buggies recently appeared in this community, in contrast to the traditional open buggies characteristic of Swiss communities. View 32 photos of the Adams County settlement.

6. Nappanee, Indiana (5,910; 43; 1842) – Centered around the town of Nappanee, this community is a stone’s throw from the Elkhart & Lagrange settlement. RV work is also common here. Nearby you’ll find a community of Old Order Mennonites. Read more on Nappanee.

7. Daviess County, Indiana (4,855; 29; 1868) – This southern Indiana settlement has a deep-fried flavor to it immediately noticeable in the local drawl (described by one observer as “Swiss Amish with a hillbilly accent”). Dinky’s auction house is a popular Friday destination for locals. More on the Daviess County Amish. 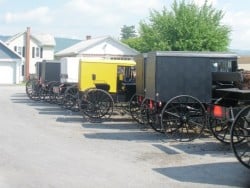 9. “Big Valley”, Pennsylvania (3,905; 30; 1791) –  This settlement in Mifflin County in central PA is located in what is formally known as Kishacoquillas Valley, though if you ever visit you’ll quickly see why it has its nickname of “Big”. The roughly 30-mile long, 5-mile wide valley is home to three distinct Amish groups – Byler, Renno, and Nebraska Amish. Read more on Big Valley.

10. Allen County, Indiana (3,190; 22; 1852) – Another Indiana Swiss Amish settlement. As in other Swiss locations, particular surnames are prevalent here, such as Graber, Lengacher, and Schwartz. Allen County stands out visually for its large number of brick homes and common use of solar and wind power. Read more on Allen County.

11. Smicksburg, Pennsylvania (2,985; 21; 1962) – Along with Seymour, MO, this community found in Indiana County in western PA is by far the youngest on this list, suggesting relatively rapid growth. Here you’ll find the Midwest-style black buggy. More on Smicksburg.

If we extended this list to 20, we’d include communities like Munfordville, Kentucky; New Wilmington, Pennsylvania; Conewango Valley, New York and Cashton, Wisconsin.

As seen in the recent population estimates, the Amish continue to grow rapidly, having increased by 100,000 over the past decade.