It took Sam E. Miller two tries to leave “for good”, but in autumn of 2009 he made a break with his Amish community in upstate New York, and entered life in the English world:

In October, it will be 13 years that Mr. Miller, 30, has been living life as a member of what the Amish refer to as “the English” — those outside their own community. His family has largely ostracized him, although he does have an Amish brother in Indiana he occasionally visits.

“I haven’t been invited back since I left the community,” Mr. Miller said. “You kind of get used to it. You just realize that’s the way it is. We do write a letter back and forth sometimes.” 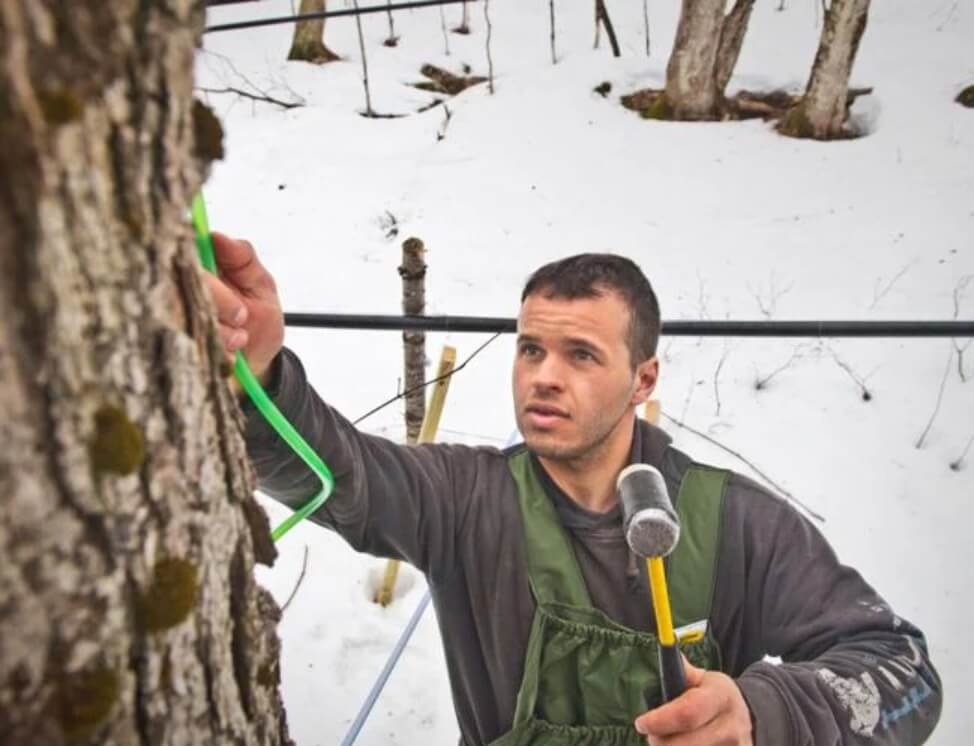 Sam has now written an autobiography detailing his journey, as described in NNY360. He discusses both his leaving, and the community he left behind:

“I actually very much did like the Amish life,” he said. “But my father was the bishop of the community. He had very strict rules set for me and my siblings. I felt like I wasn’t necessarily fitting in because I wasn’t able to do the same things or the same activities and stuff like that than what some of the others were able to do my age. So, I just didn’t feel like I fit in.”

Mr. Miller noticed the differences in rules when he visited his uncles.

“When we went to visit, it was different,” he said. “I could see they didn’t have some of the strict rules that my father had for us.”

Those rules included the especially divisive one about suspenders.

“In many people’s eyes, that may not look like a big thing, but it is a big thing if you’re a teenager and you have to wear suspenders,” Mr. Miller said.

He said that usually in the Amish community he was from, a young man could stop wearing them between the ages of 14 and 17.

“My father wanted me to wear suspenders until I was 21,” he said. “That’s when we basically go on our own.”

The wearing of suspenders didn’t bother him until other boys his age began asking him about it. He started staying home on Saturday nights, a time reserved for socialization, to avoid the issue.

“I guess for quite some time, I had a lot of anger built up because of my father, how strict he was,” Mr. Miller said. “I felt things could have been different if he didn’t have such strict rules.”

Mr. Miller left his Amish life before reaching the age of 18 or 19, when he said the youth are asked to get baptized into the Amish faith.

“That is why I wanted to leave before I got baptized, as I didn’t want to make a commitment to God unless I could stand good for my word,” Mr. Miller wrote in his memoir.

He also describes getting a spanking at school for what he calls incorrectly coloring a cow. So it sounds like he had a stricter-than-typical upbringing. The Swartzentruber Amish have stricter ways of living on balance than other Amish, but it sounds like his family and in particular having a strict father who was also a bishop exacerbated that (Amish bishops and ministers may feel an obligation to maintain a stricter lifestyle than the average church member, due to being leaders and de facto public examples in the church).

Sam had been nudged over the years by non-Amish friends to write down his story, which led to the book Memoir: Reasons Why I Left the Amish Community. He had more reasons for writing it than just telling his story to non-Amish readers:

The book, Mr. Miller said, is more than about getting his story out in the public for those interested in his recollections of growing up Swartzentruber Amish.

“I also wanted to have the Amish to read it so they can see a little bit different side, so they don’t have to have such strict rules for their children,” he said. “Just be more caring.”

Mr. Miller said there’s been “quite a few” Amish in his area who have read his book.

“I think it’s good they read it,” he said. “They probably don’t like it that it’s out there for the public to read. I did hear from a couple of them who had read it. They thought it was some good information. They looked at things a little bit differently, I guess.”

Sadly his father, as Sam reports it, sounds particularly stone-hearted. He was at one point retrieved by police, who had been alerted by his father:

Back at home, Mr. Miller said his father told him God and the Amish community would never forgive him. But there was more, which hit Mr. Miller as especially cruel.

“He also said I would never make it to heaven,” Mr. Miller writes in the memoir. “Instead, God would create a very hot fire and my body would be burned.”

With stories like that, you can understand why the Amish as a whole – and their church leaders in particular – might get a reputation for being severe. It’s worth noting that they’re certainly not all like that – in fact I’d say most are not – and wouldn’t say such things to their children. But in the stricter settings, this sort of thing could happen. As Sam attests.

Today Sam runs a large sugar bush operation (a sugar bush is a forest or stand of trees used for making maple syrup). With 14,000 trees tapped, it has the potential to make 6,000 gallons of maple syrup. Out of the Amish for well over a decade, he gives the impression in the article of having adjusted well to life outside his Amish origins.

These stories – of Amish young people leaving – make me feel sorry for both sides. For the young Amish person who feels he or she has to leave loved ones behind, and also the family left behind. I wonder if Sam’s father understands how he feels he contributed to his leaving. Maybe this book, if read by his father, will help mend something between them. To Sam’s credit, he doesn’t come across as bitter: “I guess if I was to say something to my parents, is that, you know, I think of them every day and appreciate the care they had for me while I was being brought up.”