Over 600 Pennsylvania Buggy Accidents since 2003

The Pittsburgh Post-Gazette has put together a graphic showing the number of buggy crashes in Pennsylvania since 2003.  The chart displays year-by-year accident totals as well as crash rates for a number of counties with a significant Amish population.

Over the past decade, 2006 saw the most accidents, with 78.  The fewest were recorded in 2003, with 56.  The chart accounts for 665 crashes though it’s not clear how many might be unreported here. 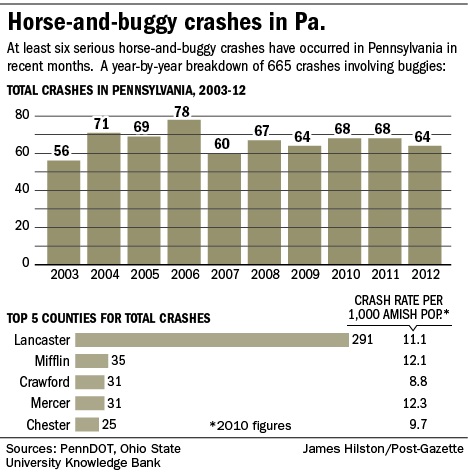 Since the beginning of October there have been “at least five serious crashes involving buggies in Pennsylvania”, leading to three deaths  (crash count updated to reflect corrections in original story).

I try to be mindful when driving over hills especially.  You never know what might be on the other side.  Chances are a buggy has just crested and is descending slowly, just out of view.

Hilly, potentially dangerous terrain is common in a number of the larger Amish communities, including Holmes County and Lancaster County.